Now what was this experience all about? This was telling the story of building a game and what it is like for developer, and also touched on the ideas of growing up to be a games developer. This included the rejection you might receive in relation to trying to bring your games to platforms as a developer (which I will touch on later).

This was done through the low-poly visual styles that took you into some crazy environments, what I would liken to being a VR trip. But, one that keeps you in each environment, and take in the story Ben was telling. This really was a barrage on both your visual and audio senses, and one you left feeling like you understand parts of Ben’s processes in being a game developer.

A great decision by Ben was to take the full version of this experience with him, which last around twenty-five minutes. It was fantastic to be able to see it all, and not be left with the feeling you wanted to see the rest of the project.

After playing the experience I wanted to get the chance to call back and see Ben with some questions, unfortunately I never got the chance. But, I did contact him by email to get them answered. Please see these below;

Question: I was wondering with the name being branded the last game of Ben Lunato, is this actually your last game or was this more to do with the subject matter of the experience? being the end of the world an all?

This is just my last planed game, I’m not looking to start any new solo game projects. The last game also ties into the game story. And in general is just supposed to engender as big an emotional responses I can possibly get from a name.

Question: Also, in the game you have emails at one point, I was wondering where these real emails from Sony? (The Sony one stuck out to me)

They’re all real emails from Sony and other companies, included to embellish the themes of the scene and to show how far you can push the visual personal and kinesthetic in VR. The emails seem to have a strong response which is good but I’m not trying to make any sort of comment on a company as and do have a good relationship and have work with some of them.

Also we need to give a massive kudos to Ben for his set-up fitting in with the trip you are going on, with the use of glitching CRTS, and even a screen in teddy. It really was the stand out display for me. 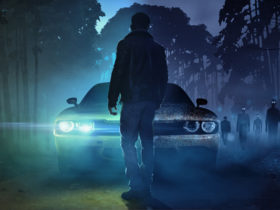 April 11, 2019
One of the Best Cryptocurrency Payment Gateway in 2021 – Cryptoprocessing by CoinsPaid.