After The Fall is only weeks away from release, with the game dropping on Steam, Rift, Quest 2 and PSVR on 9th December. Ahead of its release I have been given the opportunity to play through a Harvest Run with TamTu Bui; Vertigo Games community manager.

When booting into the game, you are placed into The Line, a place that will act as a social hub, and this really looks like a promising feature for the information provided. On launch this hub will hold up to thirty-two players across all the available platforms, and will act as an area where you can squad up with other people in that hub instance. Now, this sounds like a perfect scenario if it works as seamless as Vertigo Games plans it to, and from what I have seen with TamTu, it seems like it can be. Upon entering the hub and being joined by my guide, he pointed to my name above my head, and then I had an invite to join his squad pop-up in the HMD – this is quick and negated the need to be trawling menus looking for that invite. With only the two of us present for this session, I found out if you don’t have a squad of four and want to play anyway, the game will fill the team with AI – which are capable and not a constant hindrance.

I am sure you are thinking, but what if I want to play with friends and not people in that social hub instance? This is where your friends list comes in and you can invite people from that. This is a bit of a mess on at first, but this can not be helped because the game has cross platform play, meaning you will first need to add them to your in game friends-list using a friend-code – and then you can invite directly from that friends-list. 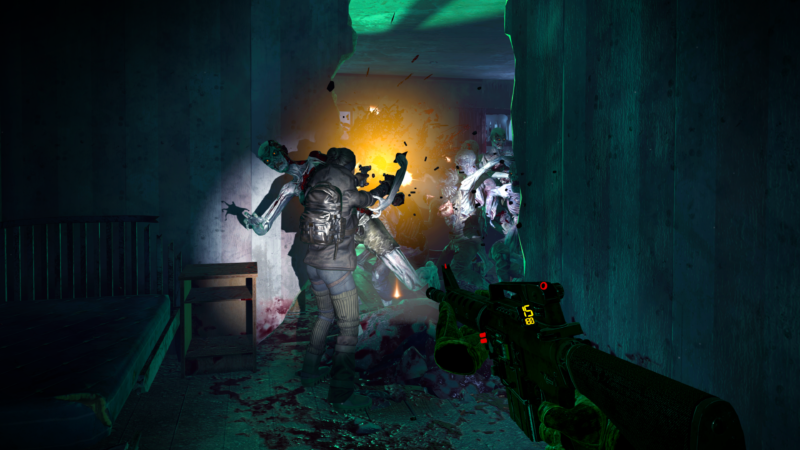 It was then time to jump into my first ever Harvest Run, and get a feel for what the games all about… and I must say its looking good. Stepping out into the frozen streets of LA for the first time, just threw me straight into amazement on how nice it looked inside of the HMD. Although, taking in the environment was quickly disrupted by frosty zombie-like creatures know as the Snowbreed swarming out of the frost and snow damaged environment. This instantly opened the communication with my tour guide TamTu, luckily he was very handy with a pistol – as we had to communicate where the horde was coming from and quickly thin the Snowbreed.

From the first attack, it was clear how well the gun-handling was implemented into the game. Like Vertigo Games previous title Arizona Sunshine, you can carry a total of four-weapons one in each hand and two on your belt. On your person you can also carry two pieces of equipment as well, which is handled the same way as used in Half-Life Alyx being placed on your wrist – which can be healing items to pipe-bombs. This equipment can be purchased in safe houses from Harvest-O-Matic machines or found on frozen Harvest Runners who have previously failed – so why not take what they no longer need.

So, I have mentioned Harvest a few times, this dropped from the Snowbreed when killing them, and is the games currency. The aim of the Harvest Run is to collect as much as this as possible, this will allow you to then use the collected Harvest to buy upgrades for weapons and also the items from the Harvest-O-Matic’s that could be essential for completing the run – with there not being items like Juicers (healing item) littered all over the world.

You can also take a risk for reward approach to the Harvest Run by exploring more of the level, than just getting through it. This holds the risk of taking on a lot more Snowbreed and possible death, but the reward of finding floppy disks hidden around the level, these will unlock a large variety of attachments for the games weapons. But, you must take into account you need to get these disks to a Harvest-O-Matic and it counts as one of the items you can carry until then. 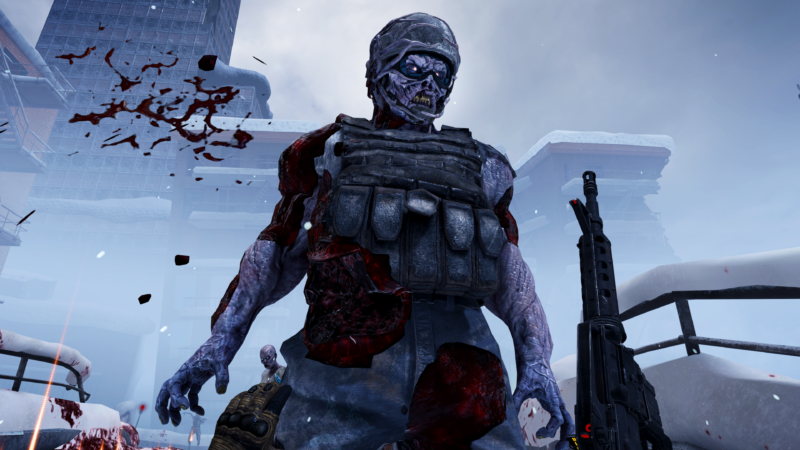 These attachments can then be purchased with Harvest and put onto your weapon. This is where I got really excited about the possibilities with the game, as you can upgrade your weapons not only to have them exactly to your play-style, but also improving them. Meaning you are going into your next Harvest Run more powerful and ready for the Snowbreed, and ready to take on the harder difficulty levels with more than the base weapons.

Now, as you might have noticed everything is going to cost you Harvest in order to get stronger and more prepared for the runs. So, there is a number of ways to increase the Harvest drop. The first is all about the effectiveness of your kill, so if you can make sure to try and get those head-shots in. You then have two reload methods simple and advanced; simple uses the reload system from Arizona Sunshine of ejecting the mag and bringing the gun to the ammo pouch to reload, and if using advanced you will need to eject the mag and manually reload and cock the weapons – with the increased reload time comes more Harvest. Finally, the last boost is the difficulty level, where more Harvest is mixed with increased Snowbreed spawn rates, which will be more aggressive with faster movement speeds.

From playing my first ever Harvest Run, in the capable hands of TamTu, I have been left with the itch of wanting more – luckily I don’t have too much longer to wait with the game releasing 9th December. I have instantly been hooked by the action of taking on the Snowbreed hordes, while making sure to keep open communication with TamTu in this first look. With what is planned and how the game works around Harvest, I think it could have that social VR experience that will want players to keep returning for that next Harvest Run. Of course this will come down to the amount of content available at launch and planned for the future, but, with my conversations with TamTu it seems they have plenty planned to keep people coming back for more. For those who were wanting Left 4 Dead in VR, this could be answer to what you are looking for.

Please Note: This article was created with a build of the game that may be changed ahead of final release