One game I spent my late-teens hammering at home was Guitar Hero and always felt it was a shame this sort of game was not available and easily accessible in VR. So, when I heard members of the Guitar Hero team were making Unplugged arcing back to those old games, I was instantly interested. So, when Vertigo Games reached out to me about taking an early first look at some of the game, I could not turn it down.

The big difference between Unplugged and the aforementioned Guitar Hero is no guitar accessory is needed, and you don’t even need controllers in your hand at all – as the team have used the hand-tacking capabilities of the Oculus Quest.

When the game was announced, I was concerned with this, with my experience with the hand-tracking on the Quest being very mixed. This concern was, as anyone who has played Guitar Hero will know hitting those notes with timing is essential, and any loss of tracking could really effect not only the experience playing the game, but, your scoring as well.

With this in mind, I really launched the game with baited breath – I did not want to go in to it overly excited and be let down. Thankfully, any of my concerns on the implementation of the hand-tracking was instantly eradicated during the tutorial. This really showed how well the team had this working, all while being given lessons for Satchel from Steel Panther – from within a poster back stage. This was a great little touch, as he brought his rock star attitude and humour to the tutorial.

In order to play the songs you are given a virtual guitar, which you can reposition until you are comfortable, start playing a song and find it’s not comfortable and you can pause the game and make changes in the pause menu. The repositioning is done by holding the neck of the guitar and the whammy bar and moving it around. Getting the positioning correct is essential for the game, to make sure you are hitting those strums, and I personally found my most comfortable position was playing it seated. The reason for this I found when playing the songs I found I moved physically to much – as the guitar position will not follow you if you take any steps.

For science I did try and see if using the Guitar Hero controller (as I still have and play this) would help why the stability of moving your hand along the neck. The result of this is it does not work, as the cameras need to see your full hands the occlusion of holding the controller means your hand can not be picked up.

The songs are made up of four-notes, these are;

Hitting these notes will also requite you to do the correct hand gesture, these have you either keeping all four-fingers on the fret, using the middle two or removing one of the end fingers. What I loved about this hand gesture system, they all make gestures known in rock music, be it a solid fist, throwing the horns, pointing and the grnarly gesture – a fantastic little touch for a game of this sort. As with Guitar Hero hitting streaks will boost a meter, let that meter empty and the song will fail and the fans will turn on you. But, hit streaks and the fans will love you and you will unlock star powers – which can be activated by touching them between strumming or hitting them with the neck of your guitar. 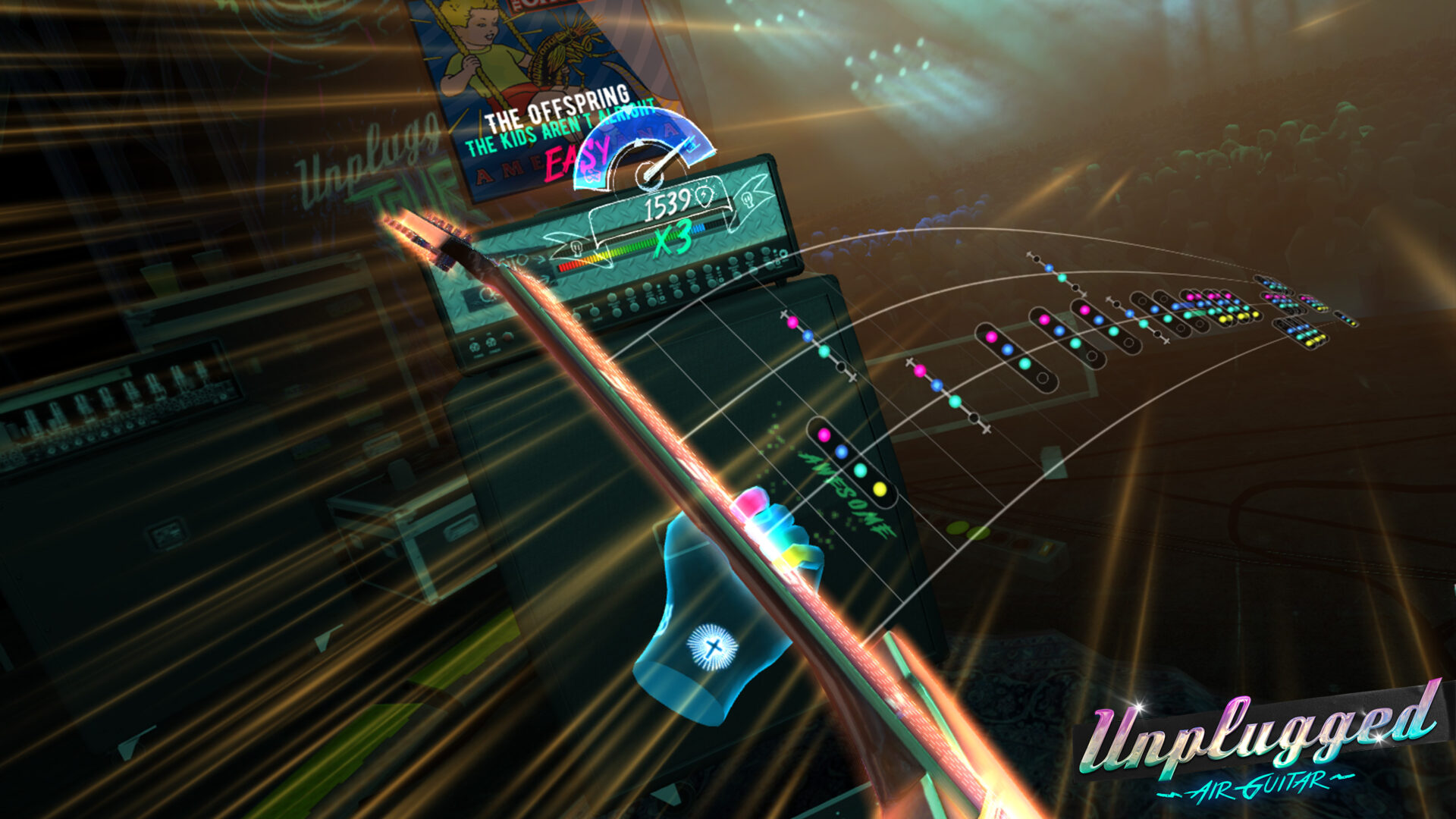 In the version I got hands-on with, there was four-tracks available, and all by bands and artists I love – so this was another huge bonus. Theses tracks were;

These songs came with all easy, normal and hard mode, and where I usually recommend missing out easy mode on rhythm games, I started on this in Unplugged – and would recommend this to anyone. The reason for this is, the only difference between the difficulties is a change in the amount of finger position changes. So, I would recommend using easy to get used to the mechanics, and then moving the difficulty up once you are used to switching your finger positions on the fly.

Over my chance to take this first look at Unplugged, I have been massively impressed with the work the team at Anotherway have done, and have been taken back to those Guitar Hero days – and already the four tracks available have had me playing them over and over again. Not only have they made a fantastic use of the hand-tracking that is spot on, but made a good mix of note types and hand gestures to keep it challenging and enjoyable at the same time. My time playing this small sample of the game really has me hyped, and looking forward to the release of the full game, currently penned in for Fall 2021.

Please Note: This article was created with a build of the game that may be changed ahead of final release.