When I was first offered the chance to take a look at Anime Vampire Slayer the name had me intrigued the most. Slaying Anime Vampire’s sounds like there is a lot of fun to be had. But, now I have been on a slaying frenzy what did I think of the game?

The gameplay is built around two characters that for some reason are attached to each of your hands, with each one having it’s own use. One one hand you have Cat Girl Kariko who is the princess you must protect from the vampires. Which means on the other hand you have Knight Siya, who’s job it is to take out the vampires with her sword, and protect Kariko and the land.

Kariko has no defences at all, and will take damage on direct contact with one the anime vampires. For this reason she will display your five hearts (hit-points) and all other in-game user interface details, like how may you have killed and the level you are on.

As Kariko’s defence Knight Siya is unaffected by the vampires. You just need to use her to take out the vampires with the holy blade of Neph’aro. So, just keep slashing and any that come close will be destroyed.

With this being the idea behind the characters and the game, the actual gameplay is a static endless wave based combat simulator, with vampires spawning from four-points within the land. As you take out more of the vampires the levels and difficulties increase but there is no ending, it’s basically survive until all of Kariko’s hit-points are depleted. After this it is reset and you start again trying to beat your best scores.

Now, one thing that had me confused when playing it was; at the beginning it popped up you have to 18+ to play the game. After first starting up the game I had no idea why, as there is no blood or gore and the woman are all dressed. Then when trying to find the way to quit the game I found the opinion for nudity and it soon made sense. I think the developers explain this option best on the games steam page;

“All of the characters can be topless. You can expect a lot of bouncing naked boobs. Simply activate through the pause menu button. Vampire and human boobs. big boobs. big ol naked bouncing boobs. no acts of any sexual nature.” 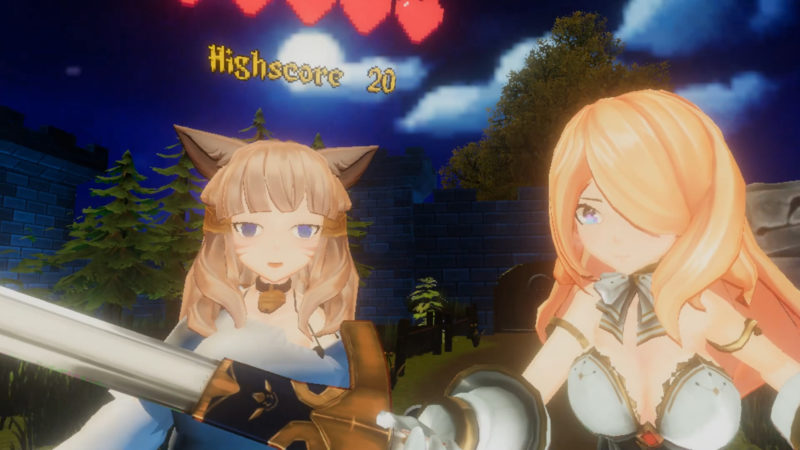 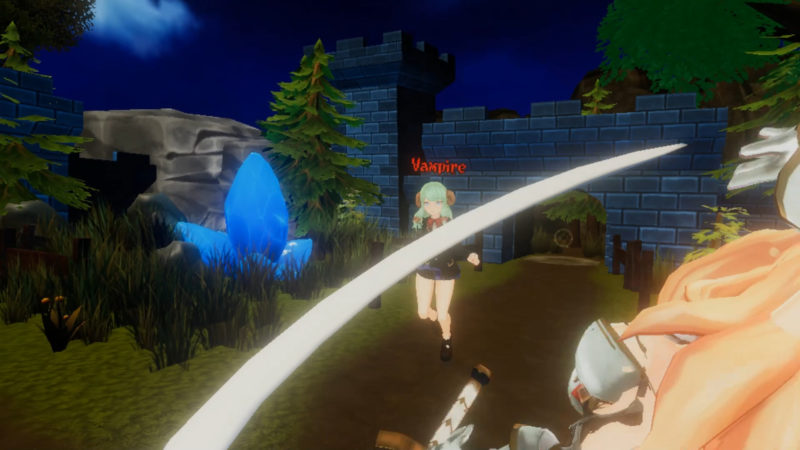 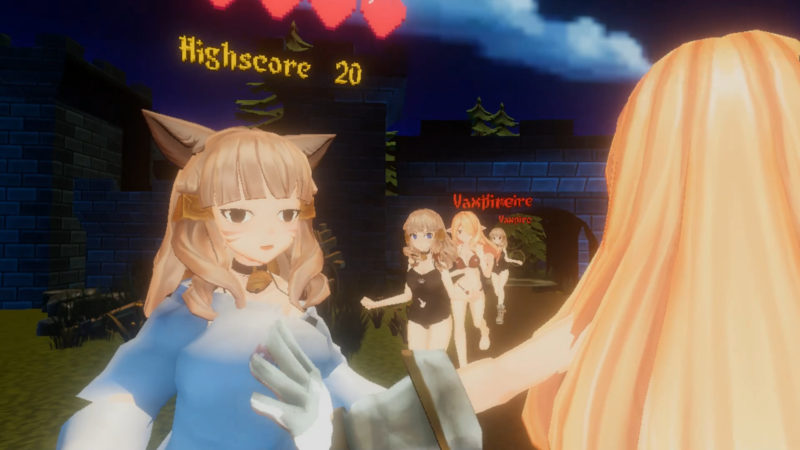 With this being anime the games visuals are a mix of environments of slight realism mixed with a cartoon feel. The character models are what seems to be the staple feature in these sort for games, the cell-shaded cartoony chest-heavy girls. Where this mix seems odd, it seems to work for what the game does, and also for many other anime style games.

The audio design has a lot of flaws. Starting with the one death sound for the vampires, the one sound for Kariko taking damage, and the one sounds for the sword swing – it soon gets repetitive and annoying. This is then cemented with the background music not having a loop, so the music just stops and you are left only with these noises, making the issue even more evident.

As previously mentioned in the game you will have a character on each hand, meaning the game is played with the tracked motion controllers. The only button you will actually use in the game is the trigger on that hand with Siya attached to it to swing her sword – this is even used to navigate the menu. With the waves of vampires coming from four-points placed around you and the amount you need to turn this game is made to played standing, I tried playing it seated and you just get tangled up with the wires turning.

To be perfectly honest I don’t think Anime Vampire Slayer is a game that will last anyone more that twenty minutes, as there just isn’t much fun to be had with it. This makes it really difficult to want and go back and beat your high scores. However, it does only cost £0.79/$0.99, so it is priced appropriately for the bit of fun you can have with it.

It really is difficult to recommend purchasing Anime Vampire Slayer, despite its very cheap cost, just down to what the games offers as a whole. The repetitive gameplay which brings no real substance paired with the glaring audio issues, makes it hard to play for more than twenty-minutes and want to go back to it again.