The first information about Until You Fall had us surprised with the change of pace from Schell Games last title I Expect You To Die. With the game taking a less relaxed puzzle approach to what looked like a very active aggressive sword fighting game. We have now had some hands-on time with the game, so what did we make of Until You Fall?

You are given a very basic storyline to go with game, but this is not fleshed out in any way. The game opens up informing you that you are the last remaining Rune Knight, and you have been tasked with restoring the beautiful lands of Rokar. To do this you are going to have to fight back all the monsters and villains that now crawling across your wonderful land.

The gameplay is a rouge-like combat game, that is punishing as you start. Like in games like Dark Souls expect to die and be defeated many time as you progress. But, with each death you are getting more used to each of enemies attacks and the best way to handle them.

When you do have the expected deaths you are rewarded with Aether (the games currency) based on your progress in that run. In the hub you are sent back to you can use this to upgrade your weapons, in turn making you stronger for that next run. These upgrades are permanent and not lost each death, meaning although you’re dying a lot you can still feel your making progress.

The main gameplay element is the well thought out and implemented combat system. Unlike other games with similar hand-to-hand combat systems, you have to think about your moves and make them wisely. This is down to although you can attack at any time, so can your enemy. When they do attack you have to block by putting your weapon in the indicated angle and position on the screen, getting these blocks in will open you enemies for an attack, so this becomes just as important as your own strikes. Each of the enemies will have a shield you need to take down, and then they will become attackable with a combo that shows the direction you need to slice them in, and if you don’t take them out in one combo the shield will regenerate to be taken down again.

When it comes to weapons, you will be duel-wielding and it’s your choice to take what suits you best. This brings in the first choice of the game, as each weapon has it’s only special ability you can charge in the rounds. This can vary from being an active shield that supports you when you block or giving constant damage to your enemy for a set time. It took me around an hour to decided on my favourite set-up despite the choice being limited to four weapons.

You might be thinking what makes this so difficult?, well this comes down to the game giving you little health. In total you can take four hits, one for each gem stone and a final hit – this will not self generate. As you come up against new enemies and need to learn their attacks these will soon be depleted. This leaves you with little room for mistakes and as you might have two enemies active at once this can soon become tricky.

The game will throw at you four basic enemy types, these come in the forms of a slow docile fodder which can be taken out in a few strikes without them attacking you, another more capable cannon fodder, that are soon easy to take down with a few upgrades. Where these become easy they throw in knights that are more capable and will be punishing if you get over-confident and try lead the attacks, huge behemoths with attacks that need to be dodged instead of blocked and then some ranged characters who will cast spells you need to cut out of the air. Then if you progress far enough you will come up against a mini-boss. 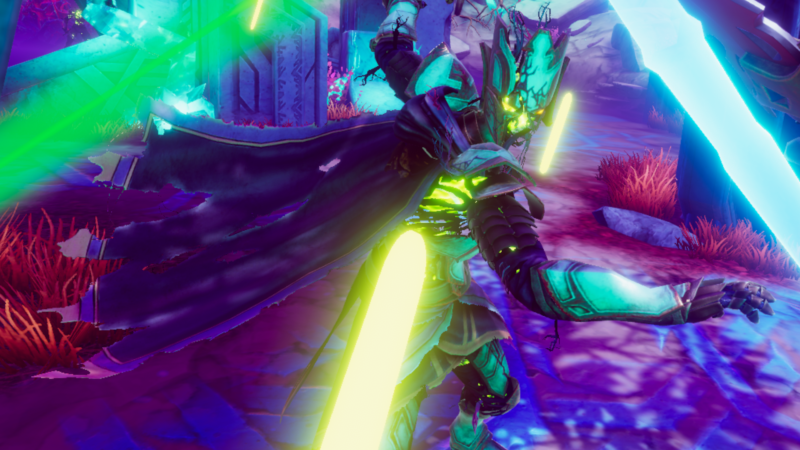 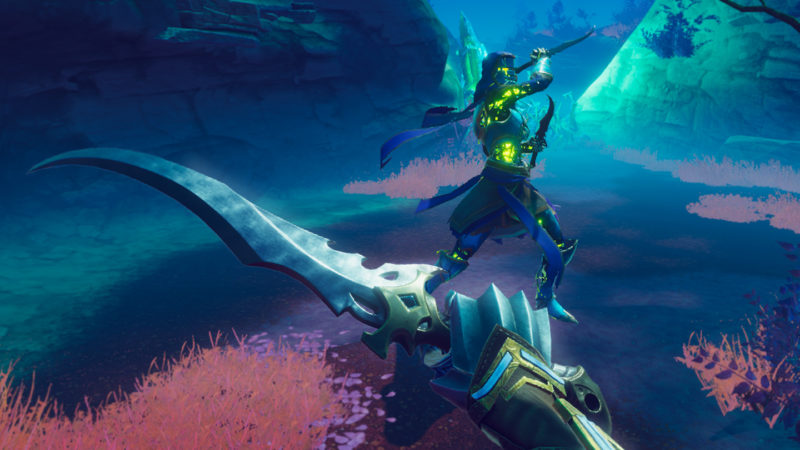 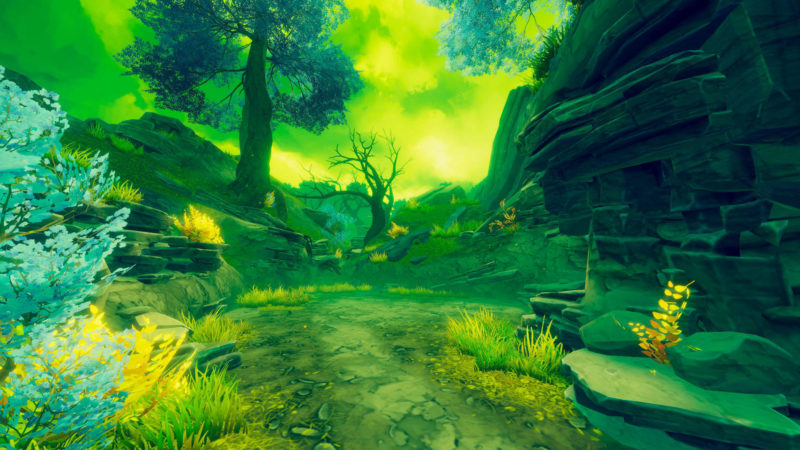 You do get some help on the way, but this can also become a hindrance in making that decision. At the end of each section/wave of enemies you do get a choice, this can come in upgrades for you weapon for the next wave, additional hit points, refilling your hit points or a boost of Aether – which could come in handy for the next permanent upgrade. You might think this is an easy choice, but you need to think about what is going to be more valuable at the time.

In the visual department the team at Schell Games have gone with quite a bright vector-esc approach to bring the environments and characters to life. This design allows you to envisage what these lands once looked like before the corruption took hold and works really well in setting the tone for the very minimalistic story elements. Each play-through will see the areas be procedurally generated to give some variation to keep the game fresh looking, but the areas are only small, so can start to come across similar despite the efforts to reduce this. This feeling is not helped with the limited enemy types having one set design for each class, so they all soon become too familiar to offer the feeling of change. So, where the design of the world is suited, it all starts to become a little stale over time.

One of the games stands out parts for me was the use of the sound. Everything in the combat from your swings, the contact and the blocking all suit the visceral swordplay. This is then backed up by the a solid techno/synth-wave soundtrack that really gets your adrenaline pumping and suits the bright design on the world. You will soon be working up a sweat as the music takes hold and you take your role in the combat.

At the beginning of the game you get the option to play seated of standing. Personally I though standing was going to be best way to play this, so for the purpose of this hands-on I played it standing. As you would expect and what is a staple in most VR games now each controller is going to represent the corresponding hand and weapon. You have free locomotion which moves at a very slow pace on one analogue, or the ability to dash on the other – but dash is limited until it recharges, so you need to keep this in mind. Other than this, you will hold the grips for your weapons to materialise, and letting go will make them fade away, then pressing the trigger with the weapons will use the charged ability mentioned earlier. This is it for the controls, and with them being so simple it allows you to concentrate on the combat and job at hand.

When it comes to how long the game will last, it is really going to depend on your tolerance for the games difficulty, as with Dark Soul type games you are going to die. But, one good factor about this is although you are dying a lot, you still get the feeling of progression, as you become stronger with your upgrades. At the moment I have played a few hours of the game for this hands-on, and I have yet to get passed the first mini-boss, but I find I do want to go back stronger and stronger until I can take it down. However, as aforementioned this could be the games downfall to some, as you need to have the patience to approach this over and over again.

Until You Fall does what it is trying to do in bringing a solid visceral combat system which requires patience and skill to progress. But, where the combat excels it might not be enough on its own to give the game that substance for a prolonged life – it just leaves the feeling that something is missing to go with this excellently designed and implemented system. Which really leaves the enjoyment factor of the game to players who like difficult games, that gives you the feeling of achievement and progression despite your inevitable death. If that sounds like you, this could be the VR game you have been looking for.

Only available through Steam VR
Developer: Schell Games
Buy Until You Fall on Steam