When I first saw Wave Circles, I thought is this another game looking to jump on the fame of Beat Saber? Now I have had chance to give a go, did I still feel this way about the game?

Wave Circles does fall under the rhythm game moniker, but to be honest that is where the similarities to Beat Saber end. Where other games might have followed the Beat Saber formula to a tee, Wave Circles feels more of a rhythm and dance game mixed together – making a hybrid love child between the two genres.

Why I feel this way is the game does have the rhythm elements of following beat maps to the songs on the game. However, it throws in the flow of following these beat maps and with your hands, hitting circle notes, hitting notes with your head and dodging. This gives it a different feeling altogether and you feel like you are moving to the music and if you really wanted you could express yourself with your dance moves while playing it.

When it comes to the songs these are not official licenced songs by popular artists, but we all know this is not necessarily needed to make a rhythm game work. The early access version of the game does come with seventeen tracks and fifty-one different maps across the difficulty levels. Meaning even at this stage there is plenty available from the get go. The team is also allowing for custom maps to be added to the game, which for me is a really smart move, as this allows for the library to be expanded easily – which seems to be a staple feature in these games on PC.

Although, one thing I did find with the songs available, so of the maps are a bit off and boring – meaning that you probably wont play them again. I found about three I would not want to revisit, but still that gives me fourteen tracks at the moment, which is plenty to keep my entertained.

The way you fail the songs is represented by three X’s on the screen. Trace the hoops incorrectly, miss a note or get hit either in the head or hands by the triangles you need to dodge and these will fill up. You can remove these by getting a good combo going, but at first it is easy to fail most the songs. 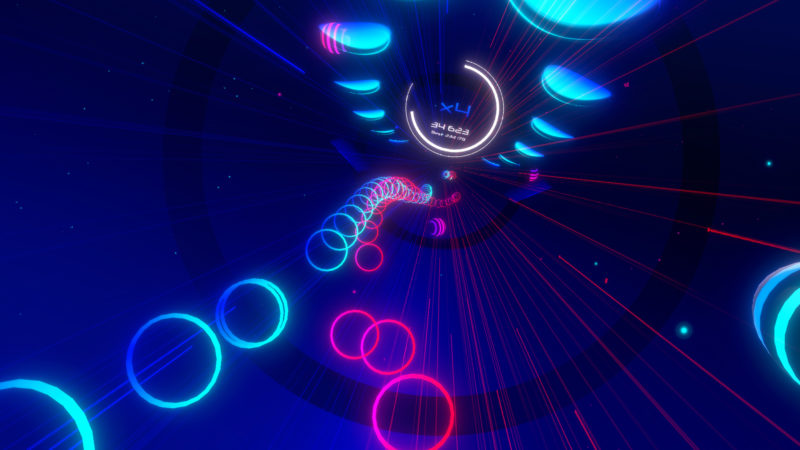 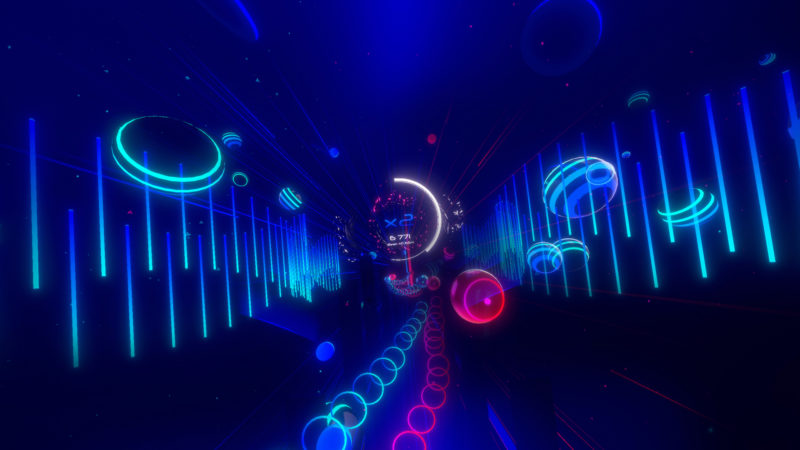 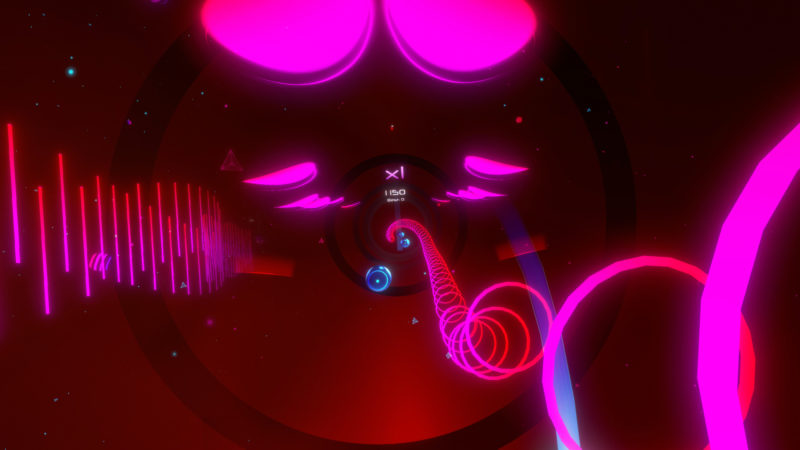 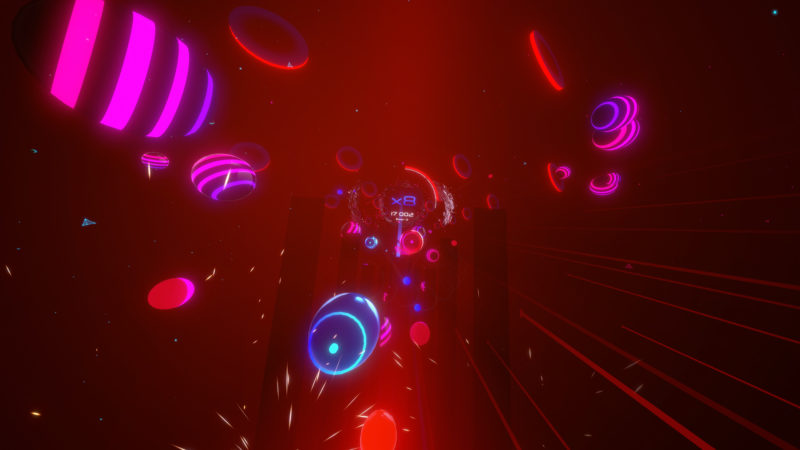 To mix with your actions the levels are set within visualizations that all seem well polished, with effects being added depending if your following the hoops, hitting the circle notes or hitting the head notes. This adds to the overall visual feel you get from the game, and makes it more appealing and not become boring looking at the same level design the whole song.

As mentioned earlier there is a good number of songs, and these spread across all genres, and despite some mapping issues they are all good enough to enjoy listening to as you play the game. Given the mix of gaming genres being linked to music of course the audio quality was going to play an essential part in the experience. I am glad to say on this point the audio recording quality is clear and crisp, so this makes for no distractions.

The game is played with the touch controllers with each one representing the ball in each hand. Outside of navigating the menu there is no use of buttons. With the movements, dodging and ducking throughout the songs this really is a game that needs to played standing. Meaning if you are unable to stand or have difficulties dodging and ducking, this will not be the game for you.

With the early access version of the game launching with seventeen songs and fifty-one different beat-maps, there is already a lot of content to keep you entertained even on your first difficulty setting. With many reason to return to the songs you like and move the difficulty up only adding more replay value. But, only time will tell over the development if the songs will keep coming from the devs and the community to keep this game going strong.

Wave Circles plays out like a rhythm game and dance game hybrid, which works really well. One thing the flow of hoops you have to trace does, is lets you try to express yourself while tracing these lines – if you feel inclined to do so. Then add the extra elements of notes to hit with your hands and head and dodging means it really keeps you on your toes. Launching in early access with seventeen tracks makes for a good start to the content in the game, however, tracks being added by the devs and the community will ultimately determine the games long-term success.