What has become well know on the VR medium is the fact that Survios know what they are doing when making VR games, never mind the genre. When Battlewake was announced and we found out they were taking us to the seven seas for some ship on ship combat, we were excited to see what they were going to do. So, did they continue the trend and bring another great title to VR?

Battlewake does offer a story across four pirate lords that take the seas with their own objectives, told through five missions with each of them. You will start by being introduced and brought together by Andromalius, the Boatman of the River Styx, who offers the person who brings an end to the Queen’s Company an eternity of riches. Of course as you are all pirates, you and your crew head into sea on your galleons wanting these riches – never mind who gets in your way.

As mentioned there is four pirate lords to use in the game. Each of them will come with their set if weapons to go with the ever-present canons found on every galleon and their own special ability to call in for that big damage. This does mix up the feel of the gameplay a little given the small changes for each character.

With the campaign it does bring something for those who are looking for single player action, but this does not come with any difficulty level to choose from, and is quite easy to work your way though. Meaning where it does add something to the game it feels lacking in this area as well. In these five missions you will get a mix of taking down waves of enemy ships with your galleons weapons and special ability, getting through a set path quick as possible, and taking on the galleon of another pirate lord in a boss battle. However, the single player campaign is worth playing through to learn the ropes of the game, and it will also give you gold that can upgrade your ship with for multiplayer – which is where you will spend most of your time.

The multiplayer mode really is where the game excels, where you will be able to jump into deathmatches with up to 10 other players. Unlike the single player you get to make your own build from all of the four pirate lords galleons and special ability. So, find your best build between the front weapons, back weapons and your preferred special to try to take the high seas from the other players. If you have played the single player mode, you soon have controlling the galleons mastered for heading online for combat.

The maps do allow for a lot moving in and out through things like rocks and icebergs that can offer some cover, but it really resolves around the glowing talismans that appear as this will give you the use of your special ability. Meaning it doesn’t all become about hiding out, as this gives a benefit to the player who gets it and draws the games frantic action in the multiplayer combat.

Outside of the deathmatch mode, you can team up in Warfare Mode, which brings in four-player co-op gameplay. In this mode you will all need to work together to take on challenging missions. As with the campaign mode again you will gain coins to do those upgrades for the deathmatch mode. This mode is great if you get a group of players that are very talkative and want to work together and this can also bring some humorous moments. 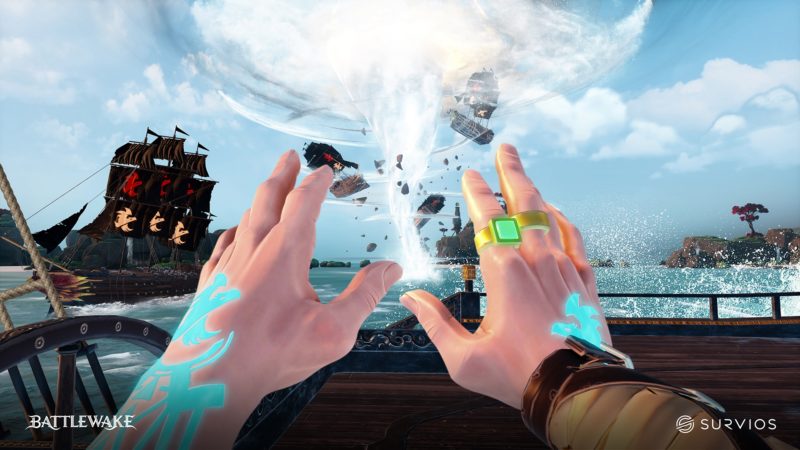 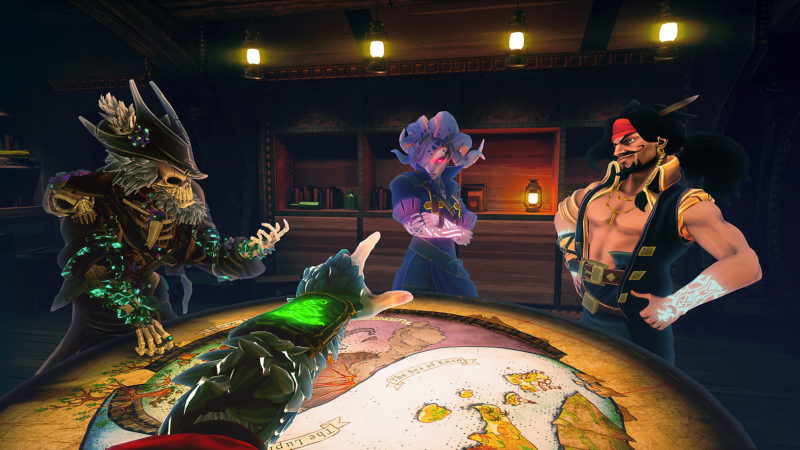 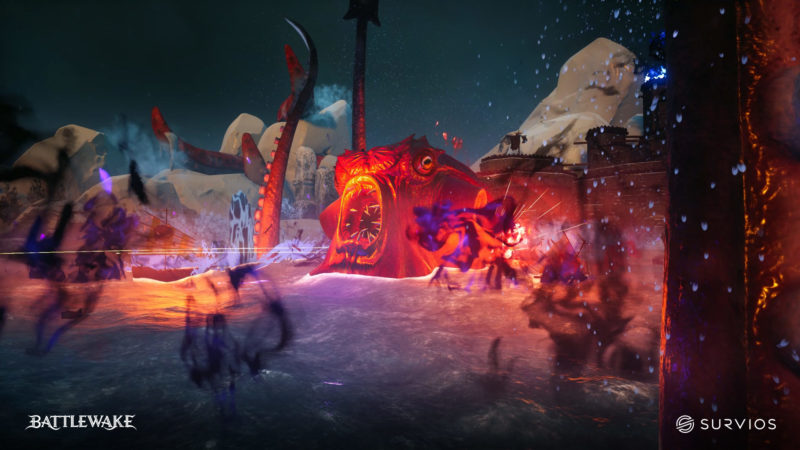 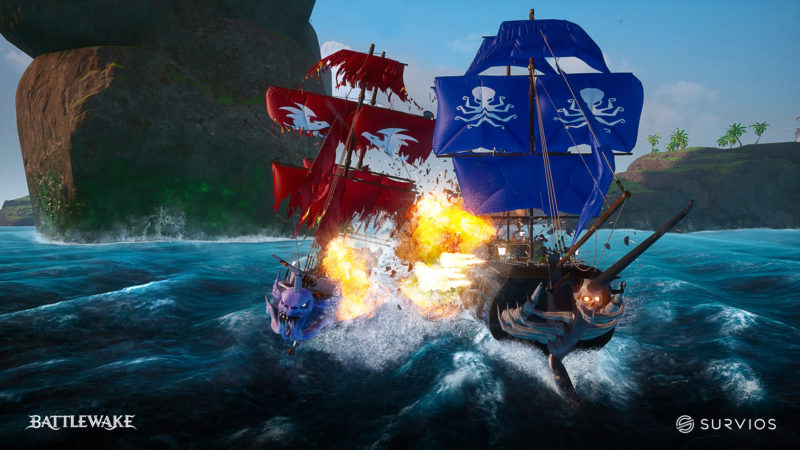 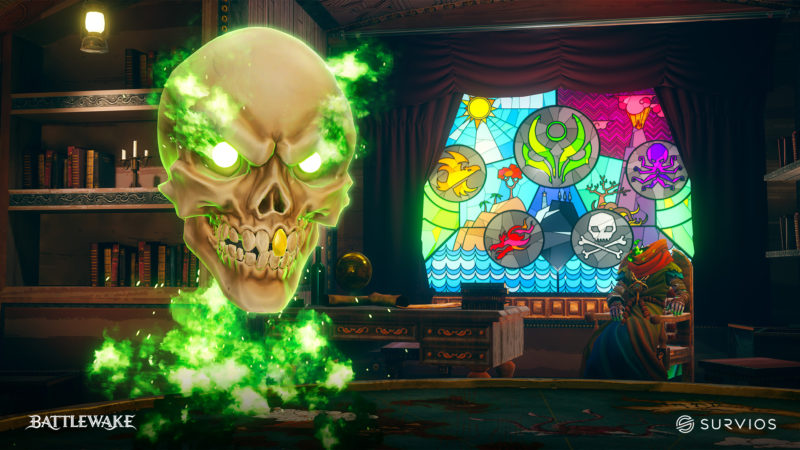 When its comes to the visual presentation in the game as always Survios have brought really strong and immersive visuals. They have brought a cartoon style design to the four pirate lords, but given them they’re own set style from humans, creatures and skeletons, but all the models look great. The galleons each have the design to go with each character model as well, making them not only match with the look but them all stand out in their own ways. When it comes the AI ships they are well detailed but there is not many variations in looks, so these can become a little repetitive after some time.

But, the games visuals hits home with the detailing in the environments and most importantly for a game like this the look of the water. Putting the detailed battle areas and the realistic looking waves and water effects with the galleons and looking out at your crew on deck really does bring great immersion into the game.

They have then done some solid work on the sounds, with fantastic voice acting, the sounds of the waves and the impact of each weapon type on the galleons and ships. Making sure you are taken into the world not only by the visuals but with the sound.

With the background Survios have in the VR arcade scene, it is no surprise seeing a game like this get arcade style controls, and a way it can be comfortable for most people. Firstly the game can be played either seated of standing, making it instantly accessible to anyone who wants to give it ago, then the control scheme makes it as comfortable as an experience as it can.

In the game your galleon is always going to be moving, you have no control over the forward motion and this allows you to concentrate on the handling of the boat. There are multiple ways you turn the boat, this is done by grabbing the captains wheel and turning gradually with this. Then either side of you there is a handle, grab this and hoist up the handle and chain and it will turn a lot sharper and quicker – sort of like a hand brake turn on the sea.

When it comes to the combat, you will point where ever you want to aim with one of your hands and press the trigger. Depending on what part of the boat you’re pointing from will depend on if you use the front weapon, the rear weapon or the canons. When it comes to using your special ability this will appear as a coin near one of your hands, you grab this with the opposite hand and aim it while the coin is in that hand.

Where this control scheme might all sound a little confusing, as aforementioned a playthrough the campaign mode with make you pick it up so easily – and it really does become second nature in no time at all.

The campaign mode will only take you two hours maximum to get through, and other than collecting coins for your upgrades there is no real reason to go back and play it again. Then as with all multiplayer VR games, it really is going to depend on how populated to servers stay on if it will have any real longevity to the title. I suppose only time will tell, but personally I feel with what the game is doing I can see it being popular in the arcade surroundings, but I am not sure how it will hold out for home use in the long-run.

Battlewake brings with it great immersion, a new control system and some great moments and laughs while in battles online, then it also brings with it some missed shots. Where the campaign mode gets you used to how the game’s control scheme works and also gets your really comfortable using it, it just isn’t fleshed out enough. Which really leaves the uncertain waters of the multiplayer being adopted by the VR community to give it that longevity – a move that could really sink the game to the depths of the sea before it gets started outside of the VR arcades.