Beat Saber has built quite the cult status in the Virtual Reality community, with it’s successful launch on the PCVR platforms, followed by a great port heading to PSVR. It was then announced for the Oculus Quest and it seemed the perfect platform for the title – given it’s tether-less approach. We have finally had the chance to check out the Quest version, so, what did I think?

You wont be surprised to hear that the core gameplay mechanic have stayed exactly the same, which of course is not a bad thing – why fix something that isn’t broke? The gameplay consists of chopping blocks to the tracks within the game using sabers. These blocks will give you indicators in which way you need to chop them with the arrows placed on them. Where this might sound a little simple by changing the difficulty you will get extras thrown in like making sure you don’t hit bombs and dodging large red blocks by moving beside or ducking under them. Then if you want to up the ante, why not throw on some modifiers? Like increasing the speed or having disappearing arrows, just to name a couple.

The songs on the game come with difficulties ranging from easy to expert+, and as you hit the higher difficulties it certainly introduces memory challenges, as you try to take a mental note of the arrow combinations for set parts of the songs. But, what you will come to love about Beat Saber is the game is easy to pick up, but a challenge to master.

With the game already being available on a number of platforms prior to the Quest release, one great thing is this versions comes with all the extras added through the games lifespan on both PC and PSVR. Meaning you will already have access to extra songs added to the base game, the DLC packs to purchase, and the surprisingly good campaign mode that launched first on PSVR. Which we first thought was going to be a larger tutorial based experienced, but, as you move through it and the challenges get harder – you soon notice what a great addition this was.

Now to the aforementioned tether-less gameplay, this is huge addition only possible easily on the Oculus Quest. Not having to think about wires, really does leave you free to experiment and try some crazy moves as you chop these blocks. 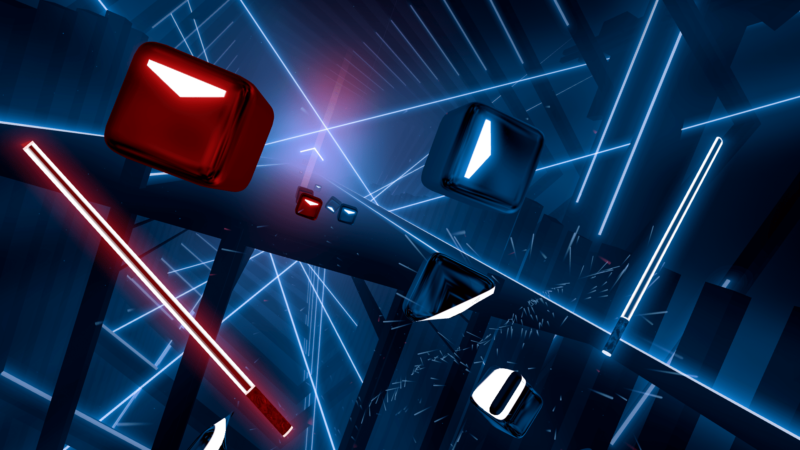 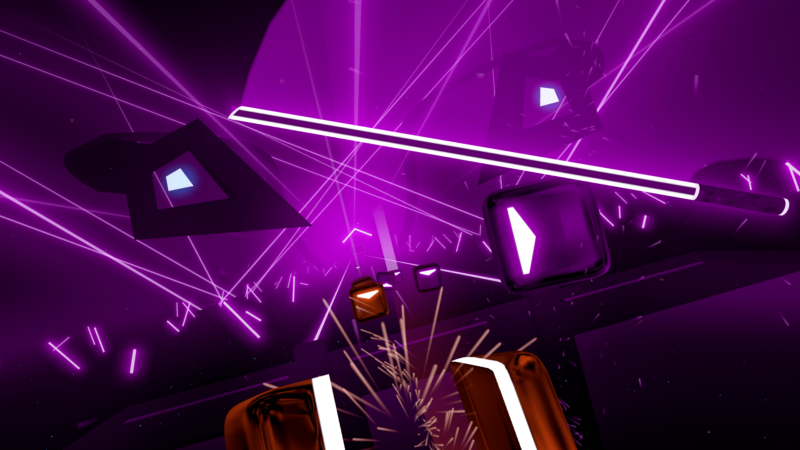 As with other games on the Quest there is an obvious downgrade in the visual presentation compared to the PC and PSVR version of the game. But, this really isn’t a massive issue when it comes to Beat Saber as it is all about that addictive gameplay, all it really needs is clearly visible blocks and arrows, and then an area to keep you immersed while taking out these incoming blocks. The way the team at Beat Games have gone about getting around the reduced power of the Quest is by removing some of the background effects and the reflection from the blocks, which does not take away from the experience at all.

When it comes to the songs they have used, given the Quest version has the original soundtrack volume one, two and extra tracks available straight way, you have a mix of genres available to play through. In order to keep you entertained and for the game to work to it’s full potential never mind the genre, all the songs have a fast tempo – which allows for the hard difficulties to shine in the game. All the songs play at a high quality which is necessary feature for a rhythm game, and the only other sounds are the noises from your sabers swing and the blocks being slice, and this is all the game needed.

The game really does need to be played standing, as the dodging and ducking is really difficult from a seated position. When it comes to the controls while in the game you don’t need any buttons, it’s all just about swinging your arms to slice with the sabers. The only time you will use a button is when navigating the menus and selecting options with the trigger.

The quest version has nineteen songs available in it’s base game, but you can now extend your library of songs by purchasing the Monstercat and Imagine Dragon DLC. But, even without purchasing these song packs the nineteen songs and campaign mode with keep many players playing for the first time or veterans entertained for a long time. With new players getting the chance to learn all the songs on the increasing difficulties and people who have played it before attempting to add some flair with this wireless approach.

Beat Games have done it again with the Quest version of Beat Saber and given the platform a solid port, with the downgrades needed being done in the correct parts. Tether-less really is the best way to play the game and gives people who have played previous versions a reason to jump back into the game again. New to the game or not, the team have made this an essential VR purchase on another platform, and one that is perfect for introducing friends and family alike to VR, without the need to bring them to your PC or console.