Dick Wilde has returned with a second round of taking out critters with it’s Southern American twist. The first instalment was a solid enough shooter, but came with a number of issues. The question is…have the team at Bolverk Games made the improvements in the sequel?

As with the first game, they have not brought any sort of story to game, and chosen to concentrate on the arcade style wave based shooter styling again. Which for me is a bit of a shame, I would have loved to get some history of the swaps and even Dick’s life – explaining why he is working with you to take out all these vermin swarming the swaps.

The game has brought back the wave based style from the original, but changed some aspects of this. Which for me has improved on what was the solid shooting element of the game.

Firstly, they have moved away from the static position that at the time was a staple in VR wave based shooters. Now, you are placed on a raft which is moving through the levels. This adds a form of movement to the game making more of an on-the-rails shooter. The raft is of a decent size as well, meaning you can try to dodge incoming projectiles and enemies rather than needing to try to shoot them out the air. This results in a bit of workout as you approach the later levels in each stage, as you will find yourself dodging and weaving as you try to take out the enemies.

As well as the new on-the-rails style, you will also get a greater arsenal of weapons at your disposal. These weapons come across four different styles; pistols, shotguns, automatic and energy weapons. But all these weapons are not available from the start, you will need to progress through each of the worlds in order to get to the levels to unlock set guns. Then once you have unlocked them, you have to buy them throughout the level as well – meaning you can’t just pick your favourites once they are unlocked.

This brings in the final part of the gameplay element, the need to purchase weapons, health and upgrades as you play the levels. You earn the money to do this by killing the enemies and removing the debris and rubbish in the swamp, which will damage your raft if you don’t. Then throughout the levels you will reach points where you are stopped by Dick and you can purchase any of the items mentioned above. Meaning if you need health at that point, you might not have enough to purchase a new weapon. Just remove enough debris and kill as many enemies as you can, and you won’t have too many issues affording things.

One thing the first became know for was it’s really punishing difficulty. The team have attempted to fix this with the second instalment, but unfortunately this one now seems a little to easy. I think we needed a middle ground between the first and second game – or even if they wanted to address the difficulty issues from the original, they could have done this by difficulty levels being included. This would have allowed for players that wanted a challenge like first to still get that challenge. 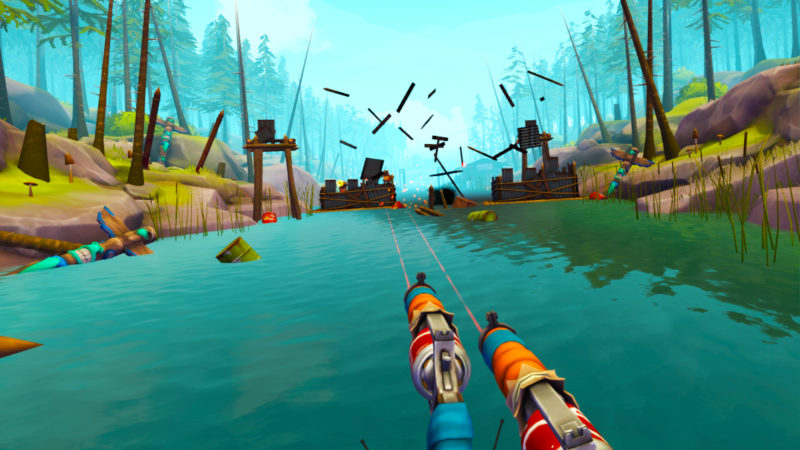 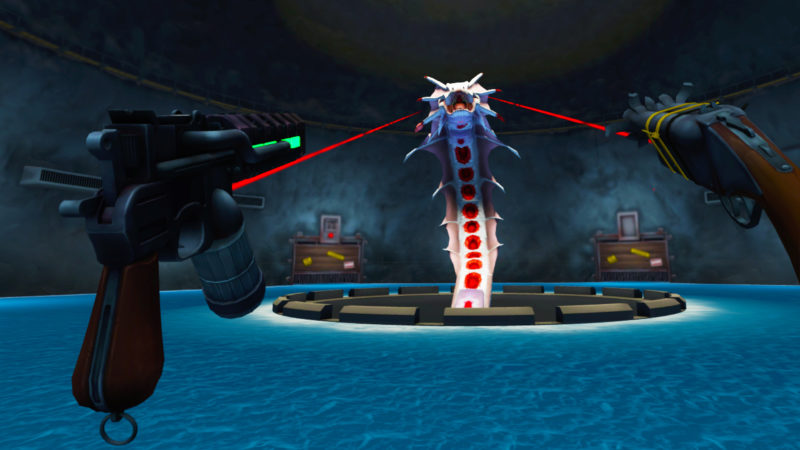 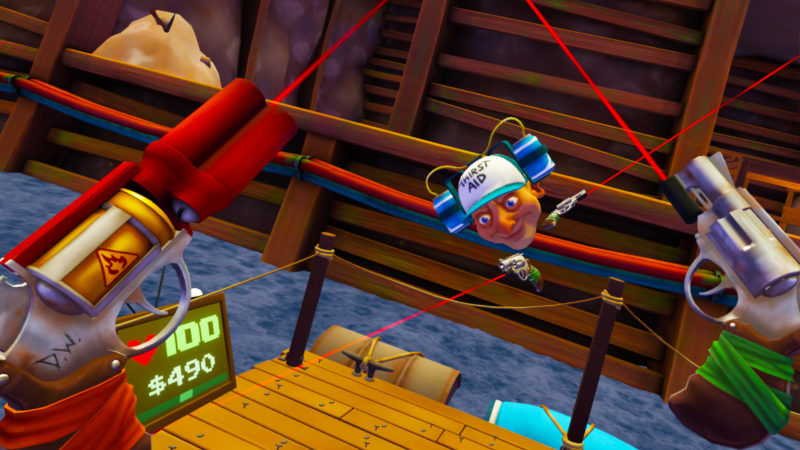 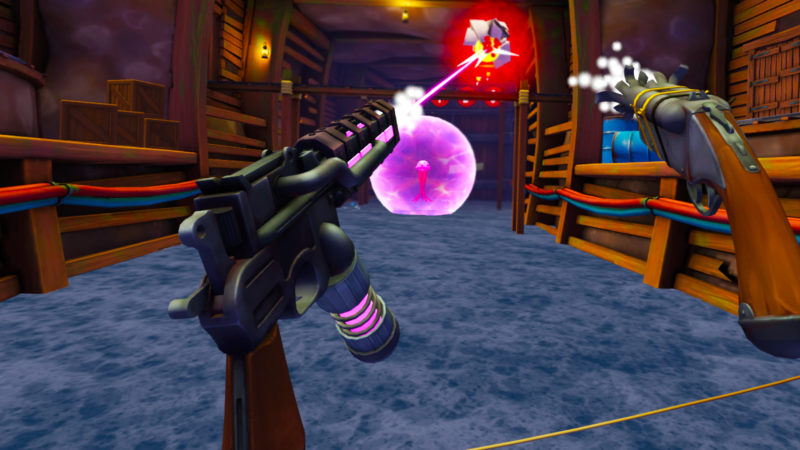 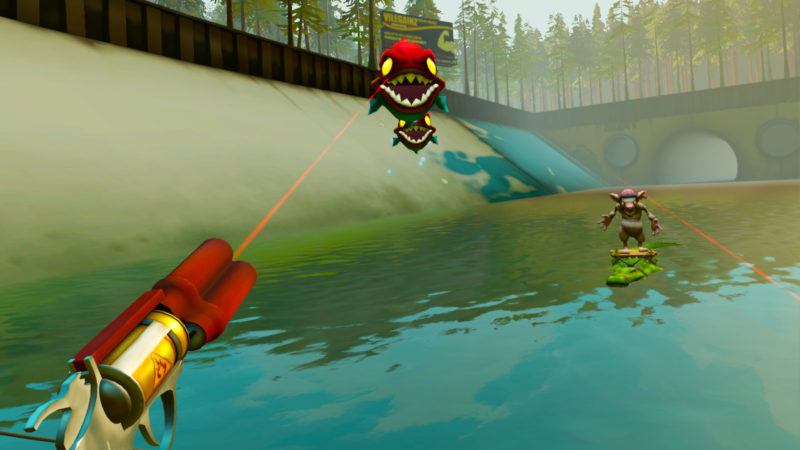 A fantastic addition to the sequel is the inclusion of online co-op. The game is more fun working with others. The game does ramp up the amount of enemies in the game to compensate for the additional player. But, the extra person allows you to manage these pretty easily, especially if you work together and take a ranged and close quarter set-up between the two of you. However, it’s great to see this addition as it makes the waves more fun. Also, to see the team bring cross-platform play it fantastic, with VR still being in it’s infancy having PCVR and PSVR players coming together on servers can bring a lot more life to them.

The game has kept the cartoon-style graphics we had the first, but these are more detailed than cell-shaded – but the bold cartoon colours makes sure it keeps the visual charm of the first. To go with this the gun models are also a lot more detailed and more realistic models than the creations Dick provided in the original. But, the decision to base the all the levels in the game across three settings; swamp, mines and sewers, really means the environments become repetitive quite quickly. A few more settings rather than varied designs in these areas would not have gone a miss.

The audio of the game attempts to bring the red-neck charm to game, but again these fall short due to a number of issues. Where the banjo music makes the perfect background for the games settings, this is soon let down by the repeated lines from Dick Wilde, and the gun sounds seeming to have a break in them if you are holding the triggers down on the automatic guns. Meaning audio-wise that game is hampered with a few issues, that were also present in the first.

The game can be played either seated, standing and using room-scale. I found for the later parts in the levels where you needed to do more dodging this was a bit difficult from a seated position – but worked fantastically in the other two modes. For the game you will be using the tracked motion controllers, with them representing the corresponding hands, allowing for that duel-wielding action. The only buttons you are going to use are the triggers to shoot and select items in the shop, and the grips to activate your special weapons once they have charged up. With his being on-the-rails movement, it makes the game very accessible to a wide number of players, and should not cause many issues with discomfort and motion sickness.

The game comes with three worlds, which have eleven levels in each one. Theses are made up of six normal levels, four weapon unlock levels and a boss fight. Each of these levels do have multiple paths and include a number of golden keys per-level. To get through the worlds you will be looking at around four to five hours of gameplay, but add a couple of hours on if you want to collect all the keys. The reason the completionists will get more is because in order to collect all these keys you will need to replay levels – due to the key’s normally being situated on split paths. Giving you plenty of time with Dick Wilde, but it all depends if you can stay entertained long enough.

Dick Wilde 2 makes a number of improvements on the first, but also faces some similar and new issues. If you are new to VR or a fan of the first; the game will do enough to keep you entertained throughout playing it. However, people who have been invested in VR for years will be left feeling the game doesn’t really make full use of VR, with what you have experienced on the platform. The co-op is a great addition and you will have fun playing with others on your raft, but with this being case and new lowered difficulty it makes me feel it would have been best suited in a VR arcade.