Down The Rabbit Hole is the next game from Cortopia Studios the team behind the critically acclaimed VR title Wands. We had the chance to preview some of the game a few months back, and we were really impressed with the little part we got to play. Now the full game is released and we’ve sat down and played it all, what did we think of the final game?

Down The Rabbit Hole is inspired and based on the classic Lewis Carroll story, however, the team at Cortopia have taken a different approach. They have made this a prequel to the classic novel basing the game around Wonderland, but, you will play as an unnamed girl who has entered the rabbit hole and Wonderland before Alice has ever stepped foot in it. You will come face to face with some of the books favourite characters from the Cheshire Cat to the Caterpillar, as you try to find your pet Patches who has entered into Wonderland.

At heart Down The Rabbit Hole is a third-person puzzle game, but the puzzling elements are not overly difficult with the majority of them being self-explanatory and pretty much straight forward to work out. Personally I feel this allows the player to be focused on the beautiful design of the game and meant you progressed without the stress of being stuck in one part for a prolonged time. However, at times you did feel they could have made a bit more of the puzzles, with the stand out example for us being collecting the ingredients to shrink the unnamed girl back down to size being a simple retrace your steps fetch mission – when other puzzles gave a feeling of being so well designed.

Outside of doing the puzzles with the main character, you are also involved in some of them. Like other games in the third-person puzzle genre you have a presence in the game, this is shown by orbs on each hand. Using this you will be required at times to interact with parts of the environments to help move forward. This is proven gameplay element that works, and the team have implemented this well into Down The Rabbit Hole – and have not over used it to, which keeps it feeling fresh when it’s needed.

Outside of the puzzle elements, you will also be keeping an eye out for invitations to the Queen of Hearts party, that you scattered around Wonderland when landing on them after your fall down the rabbit hole. There is a number of these in each chapter of the game, and where you do not need to collect these to finish the game, they do play a part in the ending – which we will touch on later. Some of these invitations are hid in chests placed around Wonderland that will require you to unlock them, I really enjoyed working these chests out, as it all about taking notice of the environments you have been going through.

The final element of the gameplay is being transported into the game world in a first-person view to have conversations with the novels featured characters, this can be from talking to the White Rabbit to a group of cards. In these sections you will have a number of responses you can give, and you must select which one to give by touching your desired response. This just gives the owe of being in the world yourself – especially when you speak the caterpillar and seeing the actual size of it.

When it comes presentation the team took a fantastic approach to how the game plays out. With this being a third-person puzzle game, they have made the game play-out in a diorama that opens up around you as you move one. They manage to pull this off by making you feel you are also in rabbit hole and the world is opening up to show these diorama, and this works so well. 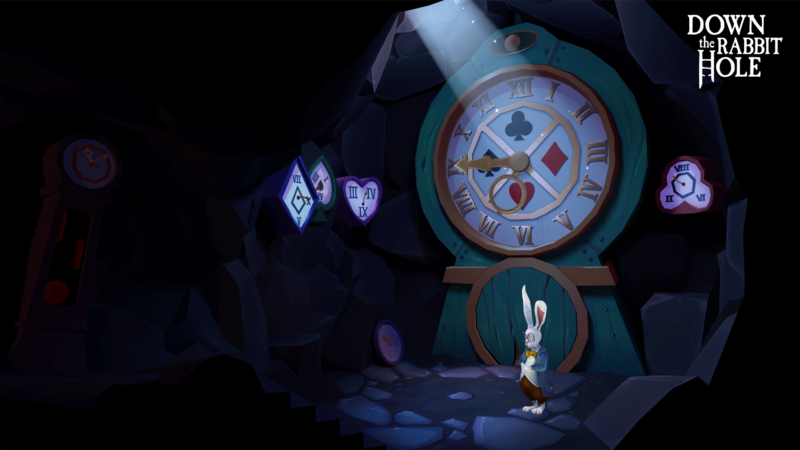 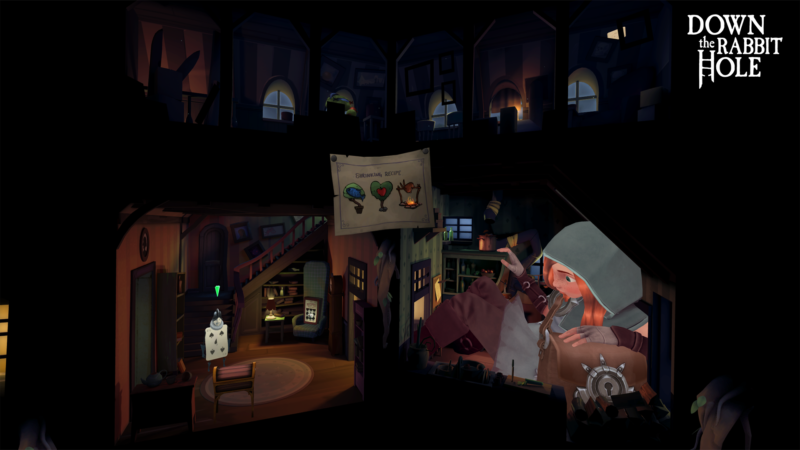 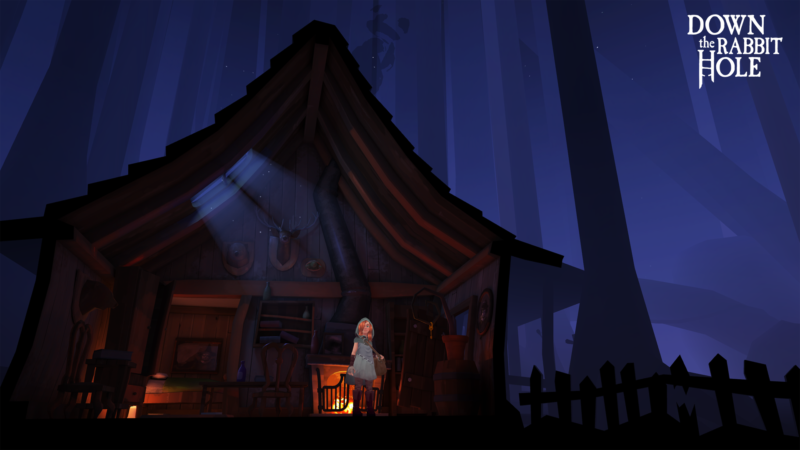 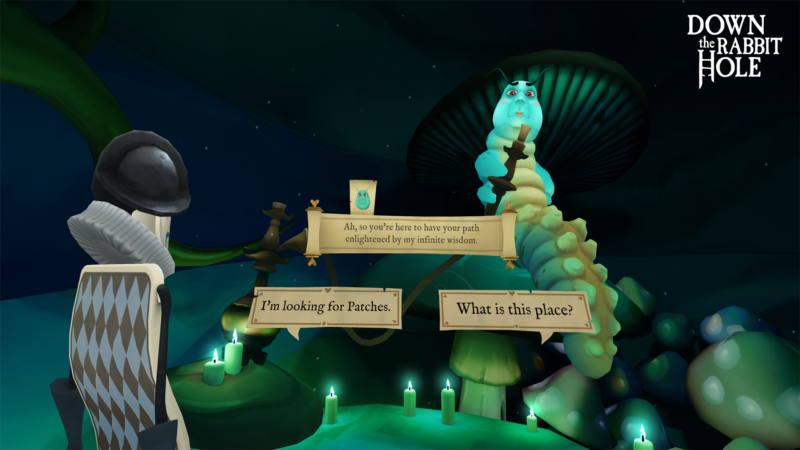 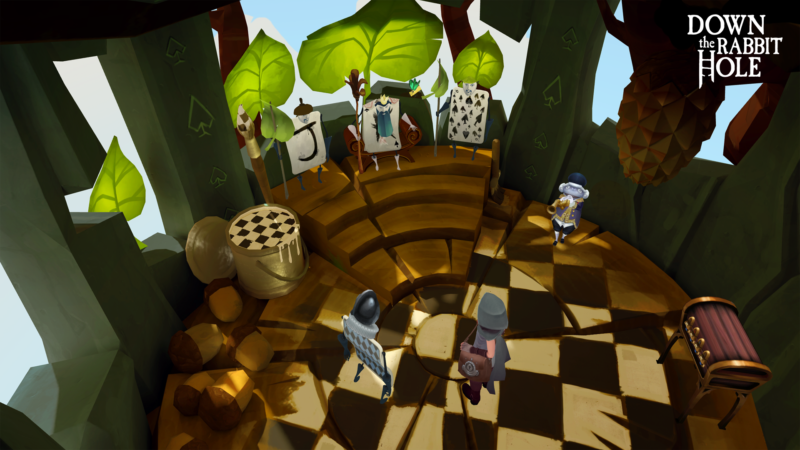 With this approach it has allowed the team to make use visuals that look cartoon in style but also part realistic. Which works perfectly for the diorama style of gameplay – and also allowed for a good-looking game even in the stand-alone Quest. Never mind how you look at the game it keeps a good level of detail in the characters and the environments, be it looking at the settings from the default distance, being in the world in first-person, or even sticking your head into the settings – which you will find yourself doing to try to locate those invitations.

Adding to the visuals that do a great a job of building up the teams take on Wonderland, they have taken the correct approach with audio. The way they have done this is by using a light music track that helps set a fantasy feeling, environmental noises that not over baring and only using them when required – for example; going from a quieter corridor to a room with a clock, and where you can hear the clocking ticking it’s not to volume that makes it feel unnatural.

Then the most important element of the audio in a game not only like this, but one that is basing itself around a well know novel is the voice acting. We are happy to report from Grandpa’s voice telling the story to every character you meet with dialogue this voice acting is to a very high standard – finishing off the games overall great presentation.

With this being like a diorama playing out around you, while you are in the rabbit hole yourself it has allowed the team to make this game playable to everyone – never mind the users tolerance for VR. Also, with how the game plays it means the game can be played either seated or standing depending on each users needs or preference – we personally played the majority of it seated.

Down The Rabbit Hole took some unique approaches when it came to controls and how the game works. When it comes to controlling the character this is done with the analogue sticks and buttons on the on the controllers – as you would expect.

However it’s your presence in the world that us unique – and one thing we loved. Outside of helping out when required with the puzzles, the diorama’s are opening up all around you, given you are in a hole yourself. The way the team have handled this is you can turn physically in your play space to look into the next opening (which was perfect for the tether-less Quest), or you can rotate the world around you using the roots poking out the walls. The way you would do this is by grabbing the roots and moving the world while still feeling natural, and this also allows you to pull the diorama’s closed to get a good look in them.

How long the game is going to last you depends on how you play the game. If you are just wanting to go through the story and only want to collect the invitations you see, without looking for them – you will get through the game in less than two hours.

However, as aforementioned these invitations do play a part when completing the game, as the game has three endings. This has allowed for the team to bring in some more play-time if you want to find them all and then also replay value if you want to see what the three endings they have to offer. The reason the invitations play a part is when you get to the end of the game, you will get three choices, and what you can select is determined by the amount of people how have received the invitation to the party.

As well, as these multiple endings, as you go through the game you will also come across some choices for the story. These will change the narrative slightly, so some might want to go through selecting different options to see how it changes this up.

For an example of how this could extend play-time, we went through the game for this review looking for invitations but not exploring every nook-and-cranny for them and found around seventy-five percent of the invitations. This increased our playtime to around two and half hours, and has left us wanting to go back to find them all, and to check out the other two endings we have not done.

With Down The Rabbit Hole Cortopia have proven again they know how to make a solid a VR game. With taking the approach of the game being a prequel to Lewis Carroll’s novel it allowed them to take inspiration from the novel but build their own version of Wonderland – include familiar characters, but also give the feeling of being something new. This brought with it another impressive third-person puzzle game in VR, which feels very polished given its overall presentation. However the puzzles were a bit of a mixed bag, where some were compelling and well thought-out, others felt like they could have offered more. But, this does not detract from what is a beautifully designed game and Wonderland setting, and we would recommend Down The Rabbit Hole to anyone.