When Falcon Age was first announced on the PlayStation VR, we thought it interaction and bond with the falcon looked great. However, we never got around to trying out this version. But, now it has come to PC via the Epic Store we could not wait to check it out, so, what did we make of Falcon Age?

In the game you are placed into the boots of Ara, who starts the game imprisoned in a work camp, forced to help a major robot-run corporation. This corporation has taken over your home-land, and while imprisoned you make a new friend in an orphaned falcon, who’s mother was killed by one of these robots. Soon you break out of the prison with some help of your new friend, and run into your auntie. This then opens up a story of oppression and family feuds, in this new dystopian world and this corporation.

As the game was announced it seemed like it was going to be a pet-simulator, like a tamagotchi for VR, but it soon becomes clear it will be more than that, as you learn the skills of your new companion. The gameplay does rely on you using your feathery friend as its main mechanic, but its broke down into three elements.

Firstly, you have interaction with the falcon which can be done through general interactions of playing with bird. This can be doing handshakes, petting it, giving it toys to play with and dressing it up. All the interactions and they way bird reacts to being petted, shows that the team at Outerloop Games are animal lovers, and most importantly brings that bond with your falcon to the forefront.

Then you have hunting, which is something only your falcon can do. This is needed to bake the treats for your companion, that will either heal or give a boost for combat. This is done by pointing to and marking what you want it to hunt, this will then swoop in for the kill and if successful will bring the meat back to you, or collect fruit and vegatables you can not reach. You then store this in your inventory for the next time you are at a cooking station which are found around the world.

The final element is the combat in the game, this is a mix of using your falcon and the baton you are given. This brings in team work and builds another level to your bond, as you fight the robots that once had you imprisoned and sometimes animal life that will harm you. There is some enemies you and the falcon can take out alone, but most need your team work to take out. This normally comes in the form of sending in the falcon to and attack that will then open part of the robot to show it’s core that you then need to destroy.

One interesting decision taken by the team is offering a none combat mode, which would allow for the bond to be only thing to worry about. However, where this is available I really think that game needs that combat element to give it the substance it has. 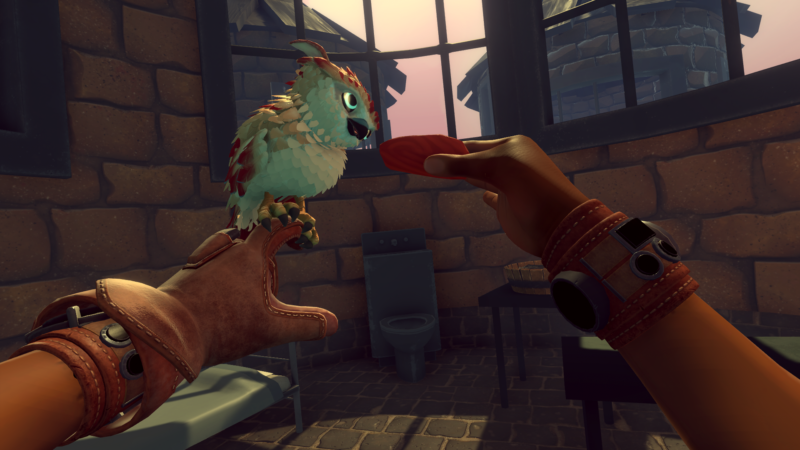 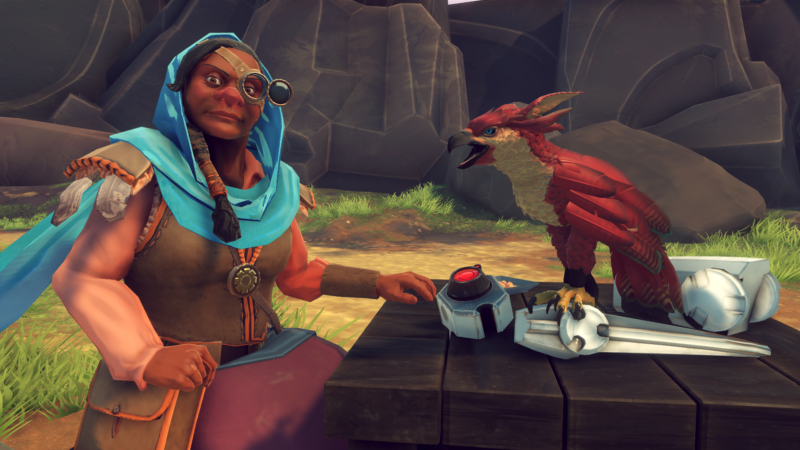 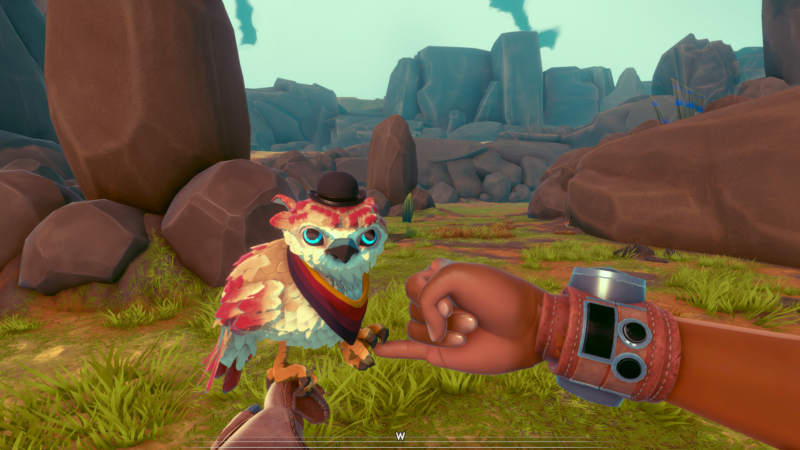 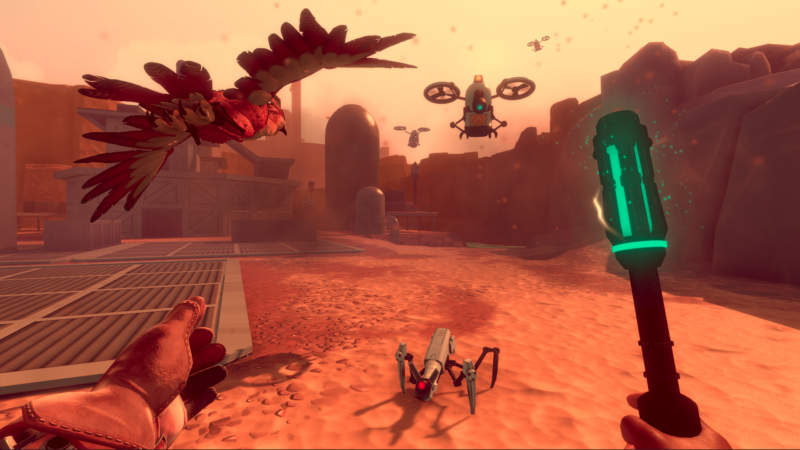 When it comes to the presentation of the game, the team have gone with a very stylized design to the game. Which in some areas works, but then in others it falls a little flat. Where the character models for the humans you meet, the robots and especially your feathery friend look nice in this style, the environments struggle not to look a little bland. Where I wasn’t expecting areas full of life with the story being in a dystopian desert setting, it just doesn’t do much to wow you. This is then only really amplified with the game having you backtracking in the settings between the objectives.

In the audio department Falcon Age is quite a quiet game. It has some written dialogue that is voice acted well. Then other than the noise of the robots, your falcons call and accessories you put on it, there’s not much more or noticeable sound effects in the game. But, given the setting and what you are experiencing with the tone of oppression this is suited.

The controls are really easy to get used to and understand. With the Index Controllers your analogues will control your movement and griping your hands around the controllers will grab items. One your gloved hand for the falcon bringing this up to the HMD and pressing trigger will whistle and call back your falcon. Then your other hand will be used for taking items off the falcon and grabbing your baton – then holding trigger with the baton will activate it’s whip ability. The B button on each controller will complete an action, on your gloved hand it will give you falcon it’s commands and on the other it will bring up your inventory. The only other button is the A on your gloved hand will bring up your map in your hand, and pressing it again will flip the map for a closer view.

It can be played either seated or standing, where I preferred playing standing it really does not have advantages or disadvantages never mind which way you play. The game also offers a free locomotion, teleporting, smooth or snap turning, making the game really accessible to anyone never mind their tolerance for motion sickness.

One thing I was really impressed with is that the team have taken time to fully implement the Valve Index Controllers. So, people with this tech and invested in it will have not only input natively supported, but also that the full visual implementation of each finger being tracked. Where this is not really needed for what the game is does, what really impressed me was the way they have made the baby falcon jump between each finger – this really does bring some great immersion, a new level to the bond and a nice little touch.

The game took me around four to five hours to get through the story with the combat, which a length I thought was right for what the game is doing. Unfortunately there is not much more to the game outside of the story, so you might find it is one that you’ll play and enjoy, but never go back to once it is finished.

Where Falcon Ages story is not one that is compelling, it tells a story of oppression and issues with mega corporations, and the games design and feel give off the same feeling. But, the games real standout element is the bond and interaction with your falcon, that really shows the teams love and understanding of having a pet in your life. However it does comes with some downsides, the games depends on a lot of backtracking to and from objectives, which highlights the games bland environments, and really brings with it no reason to play through more that the once. This leaves you thinking where Falcon Age had a lot of potential, it just wasn’t fully achieved.