When nDreams dropped the trailer for Fracked, I was instantly drawn in the by the fast paced action shown off, between some skiing and climbing. With the pedigree of the games already released by the team, the excitement was also increased. The question is; now I have I played it was it fracking fun?

In the story you are placed into the shoes and skis of a reluctant hero, who is placed in the final stand to save the planet. As, you go on your way to try and bring the end to fracking on your planet, but have to fight your way through a legion of interdimensional enemies in order to this.

As previous mentioned, the fast paced action is what instantly got my attention in the trailer, and I am happy to say it did not let me down one bit in this area. The combat is fast paced gunplay, mixed with an excellent cover system – that makes great use from the old Move hardware. When it comes to the guns you get two main weapons a pistol and a sub machine gun, both of which are used with one had to allow for the cover to be used. Outside of these you will find special guns that include one round on ammunition and then disintegrate. Ammunition for your two constant weapons is not in short supply in the game, with enemies dropping it on death, and it wasn’t often I found myself having to search for ammo for the SMG.

The next part of the combat is the very will handled cover system. Most objects placed around the map can be grabbed onto with your none dominant hand. You then can lower yourself into cover, peak over and lean out of cover to take your shots, and this works great and seamlessly in those tense combat situations.

Outside of the straight up gun fights, the game puts in some skiing and climbing elements, both of which break up the frantic gunplay well. Although, the skiing does include some shooting, which has you taking out watch towers and enemies on snowmobiles – with these sections making you feel like your Xander Cage from xXx. The climbing segments aren’t full of combat, but still manage to include some elements of excitement. This is done by parts breaking that you are climbing on, and made me think of those sort of segments in Uncharted, leaving you hanging on for life in VR. 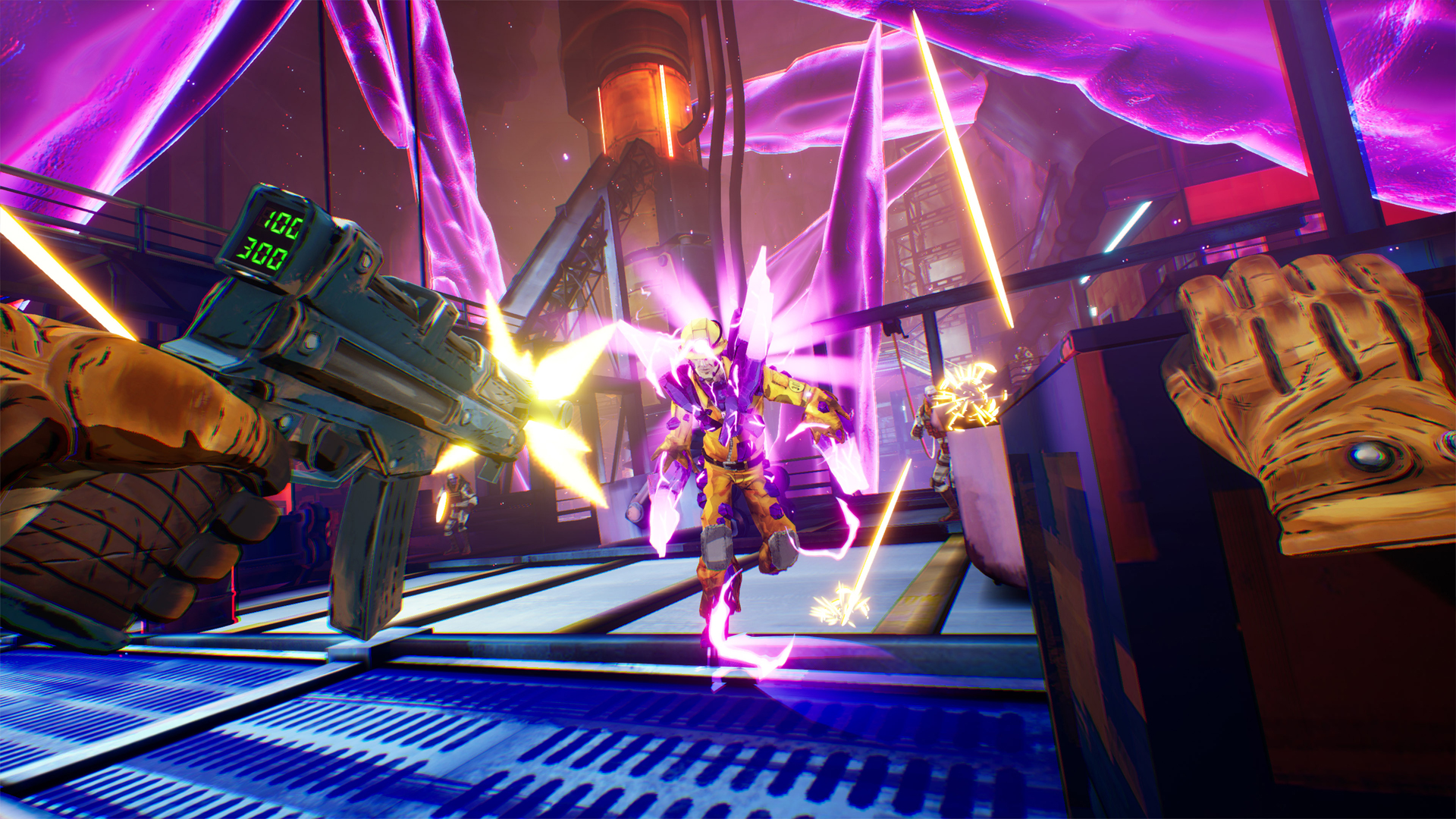 When it comes the enemy types, you will find a mix of smaller enemies that will shoot, throw grenades and explode upon death, with each type having a more altered appearance to stand out from each other. Outside of these you will also take on a larger enemy that can be a pain to take down, even when you are used to the method for this type – this is due to the smaller enemies also attacking you at the same time. Especially on the last few chapters, when I found the game introduced quite a bit of a difficulty spike all of a sudden.

One thing that instantly stood out to me from the trailers was the lovely Borderlands-esc art style, and when being in the game this style still looks great and does not let you down. The environments look great, the overall level design is beautiful, especially when seeing the avalanches coming down the mountains.

Everything inside of the HMD looked so crisp and ran so smoothly, but, please take into account for this review I was playing on the PlayStation 5 and the game comes with PS5 enhancements. These enhancements see uncapped dynamic resolution, improved framerate and resolution.

As with the visual presentation, the team have done great work with the audio. The 3D audio is perfect in the game, and it was easy to pick out where the enemies we coming from in the frantic combat – which saved my life at times. The voice acting for the characters was also to a high standard, that helps keep you immersed in the world of Fracked. The final good use of the 3D audio was the mix between the atmospheric sounds and music, which was used the set the mood in the current situation in the game.

When booting up the game, it recommends playing the game seated, but you can play standing – I tried both and personally I would also recommend playing it seated. As you would expect from a studio with plenty of experience in the industry, they have offered most of the comfort options to make sure those who suffer from motion sickness can enjoy the game – however, it only offers smooth locomotion and no teleport options. 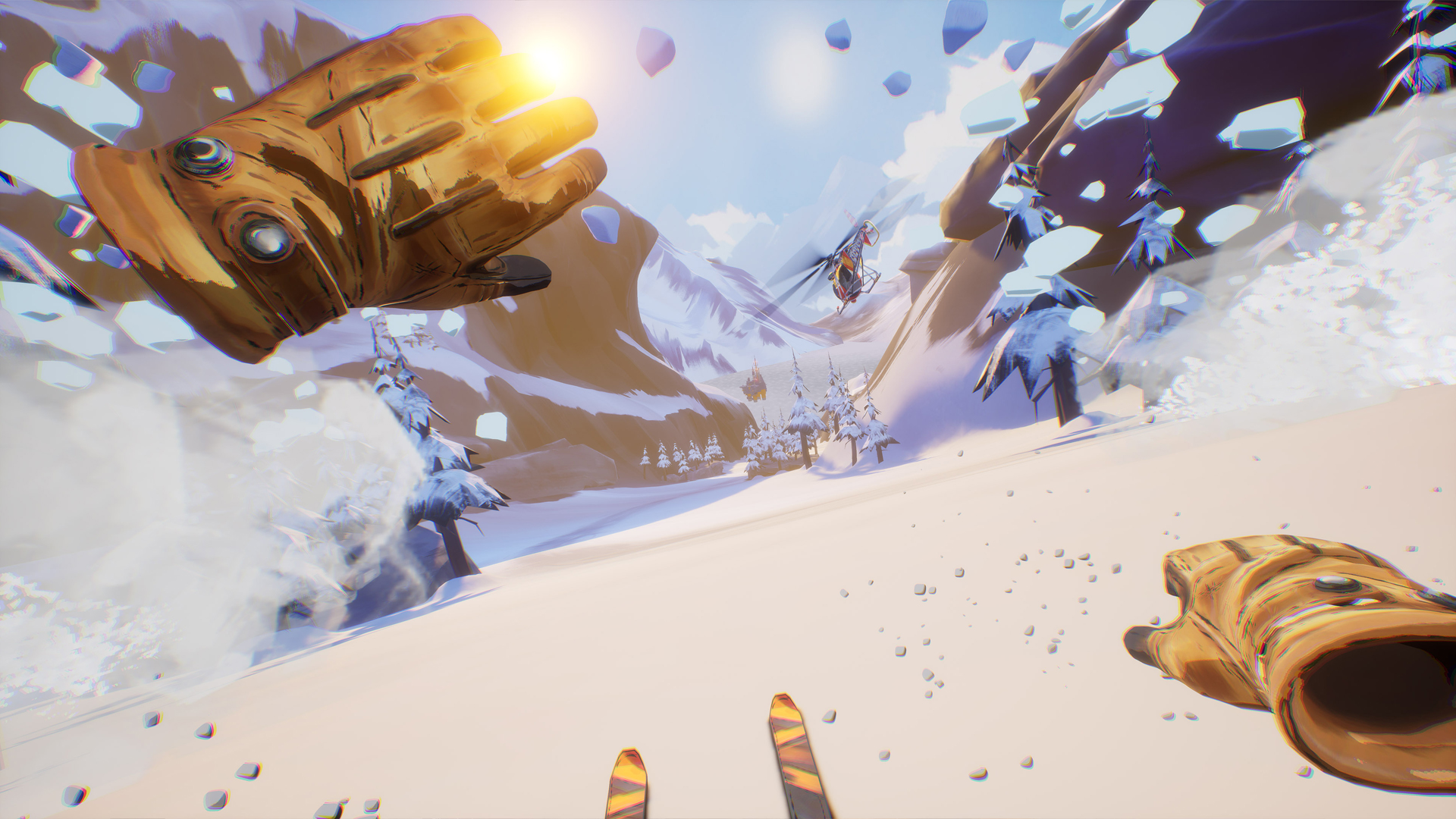 The game can only played with two Move controllers, which at first was a worry with how fast paced the gameplay looked – but, any concerns were soon extinguished. I can honestly say that the work nDreams have done implementing the Moves is perfect and the best use of the old hardware to date – and my only experience with them when they haven’t felt dated. All the buttons are mapped perfectly, and the aforementioned cover system is how they work so solidly. With how well they got them working, it really left me questioning, why hasn’t this been managed already and why did games like Blood and Truth not use free locomotion?

Outside of using the Move controllers, the skiing element is used by moving and tilting your head. At first this felt like a dated way to handle this, but as soon as the enemies start to attack while skiing, you see why the team have handled it this way.

To get through the eight chapters the game is made up of it took me around three hours, but given the fast paced and enjoyable action the game offers I think people will return to play it again. Also for the hardcore out there who want punishment, you can take on hard mode, that gives you one life to complete the game – which believe me will take some doing.

The trailer for the game really gave me high hopes for Fracked, and the team at nDreams have not let me down one bit with the game. They have made sure outside of the fun and frantic shooting, that it is mixed with other enjoyable gameplay elements, with both the skiing and climbing shining in their own rights. Add to this the best implementation of the Move controllers to date – which I can say for the first time had me thinking, I can’t imaging the game being played another way than with the dated hardware. Everything about the games visual choices and sound design is lovely, and with the PS5 enhancements being available day one, those with the new console get benefits of the extra power. If you have PSVR, should you get Fracked? Of course you should, you are only missing out on a fantastic game if you don't.
Buy Fracked
Paul Manton August 16, 2021