One thing we mentioned in our PCVR review of FREEDIVER: Triton Down was that we were hoping that they brought more the expand on the story a bit. Well, the team at Archiact have now released an Extended Edition of the game on the Oculus Quest, we were looking forward to seeing what they have done to make this the extended version. The question is was enough added to the title to fill our want for more?

In the game, you are placed into the shoes or in the case diving suit Ren Tanaka, who is a world-class freediver. After making a discovery your ship the Triton is hit by a huge rouge wave. This causes it to capsize, and now it is time to put your freediver skills to the test as you try to survive. The question is can you make off the sinking Triton?

In the Extended Edition, they do attempt to flesh out the story by adding some extra dialogue lines to give more of background to the crew and a very little addition to the games ending.

The team at Archiact have tried to bring the gameplay together using swimming mechanics, which makes this the most realistic underwater experiences you will have in VR. With this being the case it really does bring the feeling and panic of thinking you are on this sinking ship, and brings some horror elements without needing to be branded as horror.

As well as using these swimming mechanics to get around the ship, they have also brought real-life hazards you would expect in this sort of situation. From blocked doors and paths you will need to find your way around, the dangers of broken pipes and pieces of the ship, currents that are too strong to swim against, the loss of power and sections of the ship going into lock down. Keeping that feeling of realism, panic and terror brought by the swimming.

Of course, the main threat outside of the hazards around the ship is the possibility and threat of drowning. Luckily your experience as a freediver means you have the ability of holding your breath for a prolonged period, compared to your average human being, but it is still a possible outcome. On your right wrist is an oxygen counter that will slowly deplete, if this runs out you will be in your watery grave. With freedivers not using oxygen tanks, your only option is to find areas on the ship with either air pockets to get your breathe back, or the oxygen stations around the ship.

Putting the swimming mechanics, the panic that is caused by the hazards of the sinking ship and having this possibility to drown makes for one really intense experience.

In the PCVR version of the game, the team managed to keep the dread and panic of drowning though the use of the visuals and audio, to complement the gameplay. Of course, this ended up being a massive benefit to the game, so, this was going to be an essential part of the Oculus Quest build – but did they manage this with the cut backs needed for the hardware?

Visually the game really suffered by some of scale-backs that were needed. Where it still looked nice and was in no way unplayable, the game took a more of murky look due to elements that needed removing. This was really evident in that initial dive to open the story, and the vastly open sea-scape is missing the coral and all the schools of fishes that made the PCVR version come to life. However this only one section of the game, as most of your time is escaping the Triton as it sinks and to be fair the game doesn’t have such glaring changes for it’s main destination. With the main noticeable changes being that the textures aren’t as detailed and are lacking some reflections from lighting. 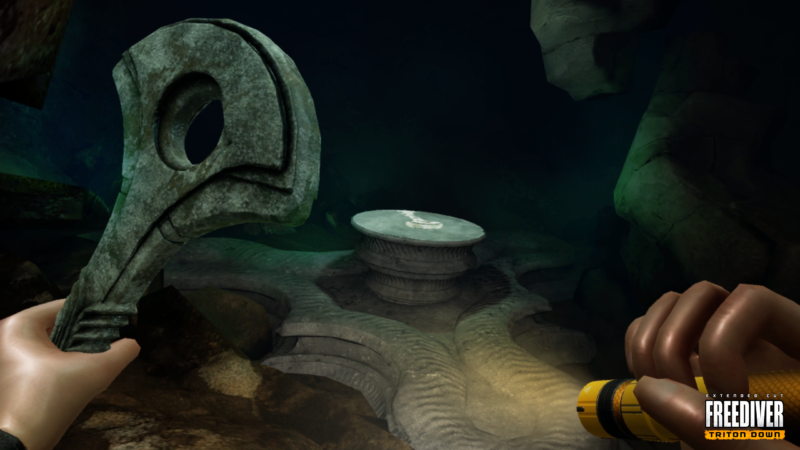 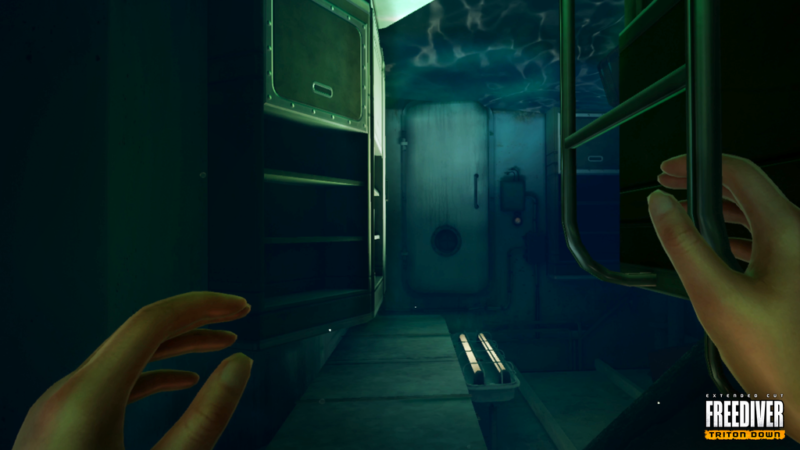 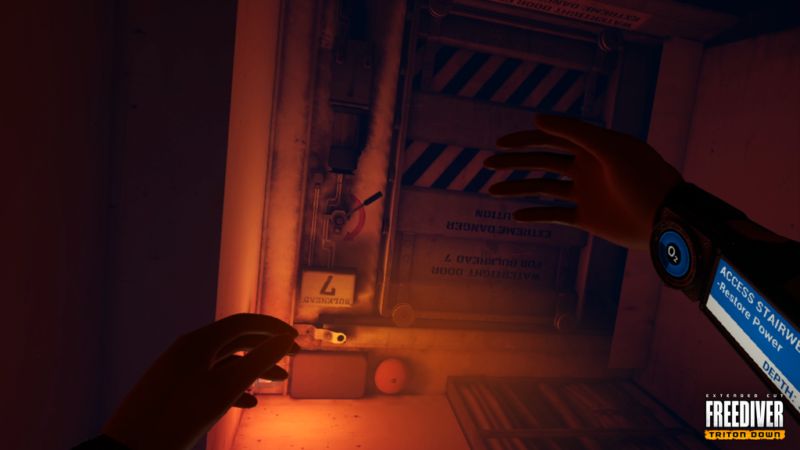 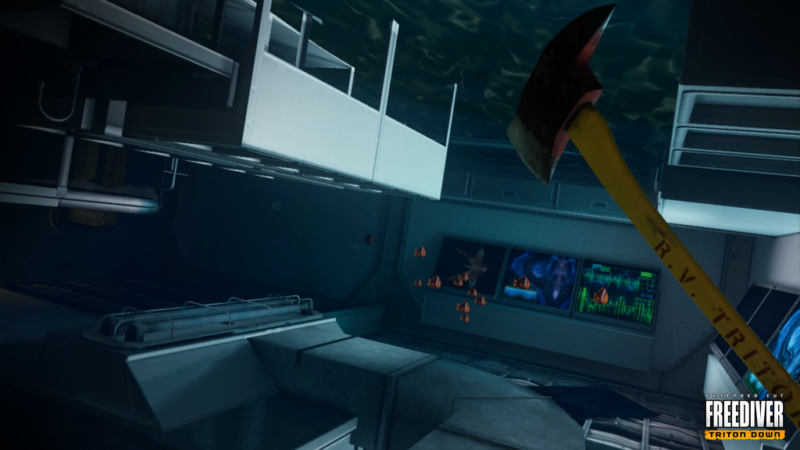 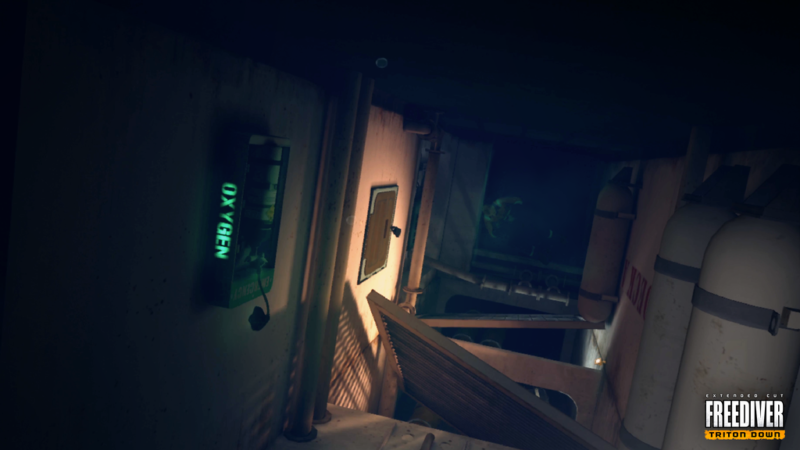 Although one main change we feel takes away from the dread and feeling of the game, is the removal of the glow sticks that are broken and placed on your arm for lighting – which has been replaced by a hand torch attached to your suit. One thing I really liked the PCVR version of the game was that green hue on the surroundings in those darker area. I just personally found this added a bit to that feeling of being stranded and dread of drowning.

When it came to the audio the team took the correct approach and kept the realism, by building all the game’s audio atmosphere simple and muffled as you would expect underwater. But, they also kept the creaks and moans from the ship in place, after all you are escaping a damaged sinking ship. The only other audio is the beeping of your gauge and some very well done voice acting. Which was inline with the PCVR version and brought the games dread and setting to life.

I found although swimming that the game was easier and best played in a standing position, although playing it seated is not a problem. The only buttons on the controllers you will be using are the triggers and grab buttons. You will need to hold down the two triggers while using the breaststroke motion to swim, lifting your arms to submerge and lowering your arms to emerge into the air pockets. To turn you will need to hold one of the triggers separately and move that arm to turn yourself. This just adds to the realism, as you are not pressing buttons to open doors, you are doing it all manually.

In the most case comfort will not be a problem for people – as the team bring a number of comfort options like vinaigrettes and them making you do the actual motions. However, even though these are in place, some of the moments where you moved quickly by a strong current could cause some discomfort to some.

So, is this really an extended version? Where the team have added more to the game it will be easy to blink and miss most of these changes. It seems like it has just been padding to flesh out some gameplay time – then trying to extend on what was the solid foundation of the PCVR release. The changes to make this an Extended Edition come in the form of; a few little extra puzzles at the very beginning of game and some more noticeable and exciting explosive sequences in the main section of the game.

These additions will increase the experience to around and hour and half, but as with the PCVR version, with what the game does it is going to be an intense hour and half that should be experienced. But, you might want to take into account this is something people are likely only to playthrough once – and with the Extended Edition setting you back £10.99 it might be a more considered purchase for the play-time it offers.

FREEDIVER: Triton Down is the most realistic underwater experience you will have in VR. This is all pulled together by the swimming mechanics and the atmosphere the game builds. But, with this seeming so realistic those with a fear a drowning and or tight spaces might struggle to play it, as it really does make you feel like you are Ren. With the Extended Edition bringing around thirty minutes more of content, but a price jump to £10.99, I feel it is now more of a considered purchase.
Buy FREEDIVER: Triton Down Extended Edition
Shares
Share on Facebook Share on Twitter
Paul Manton March 22, 2020