Lila’s Tale is one of these games that manages to tell it’s story without using any words, which is something I love when companies do it. The game starts with Lila and her brother messing about and having a great time, but that soon changes when her brother enters a mysterious dungeon. Worried about her brother she enters this dark dungeon, although she has a fear of the dark. Luckily on the other side there is a light waiting, and that is where you come into the game.

As this light it your job to guide Lila through the dark dungeons and also complete the puzzle parts with help of a brush in your hand – and this makes up the gameplay part of the game. With the aim of each level being getting Lila to the chest that contains the key for the door out of that part of the dungeon.

The basic part of the gameplay is the light controlled by your head movement, which Lila will follow in order to stay out of the dark. Of course if you move to fast you will lose her, and when you go back to her she looks scared, which really makes some connection to the character.

The other aspect is about the brush controlled by the controller in your hand, this has limited use – which is to help interact with the world and defeat enemies. How this works is when you walk up objects in the levels like switches, chests, cogs, lifts and other things a play button with show up. Once you point at the play button you will get dots you have to connect up and get to the stop button, once you have done this Lila will interact with that object. As you progress these get a little more difficult, as you will get breakers in the puzzle, and if you hit one of these it fails and you have to try again.

Then after the first few levels Lila will find a light orb, which is used to defeat her enemies. This is done under the same premise, as you walk into one of these Grim Reaper looking things Lila will hold up the orb, it is then your job to complete one of the connection puzzles. What makes these more difficult though is these are timed, and if you are not quick enough the enemy will hit you and it’s back to the start of the puzzle. As well as these little enemies spread around the levels, some of the levels will be boss fights, which can get quite tense.

The last bit to the puzzle element is by the switches, as in some cases these might to be pulled in a set order to move the dungeon floors into the right position in order to get to the chest and/or the door. But, this will not be too tasking to figure out for the older gamers playing the title. 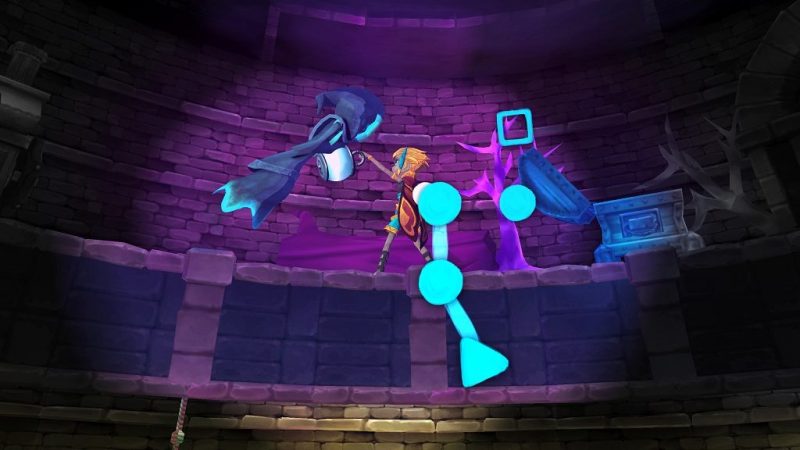 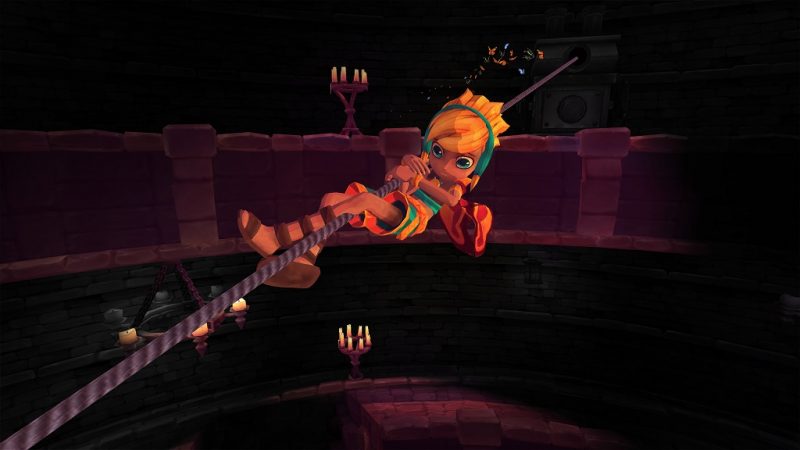 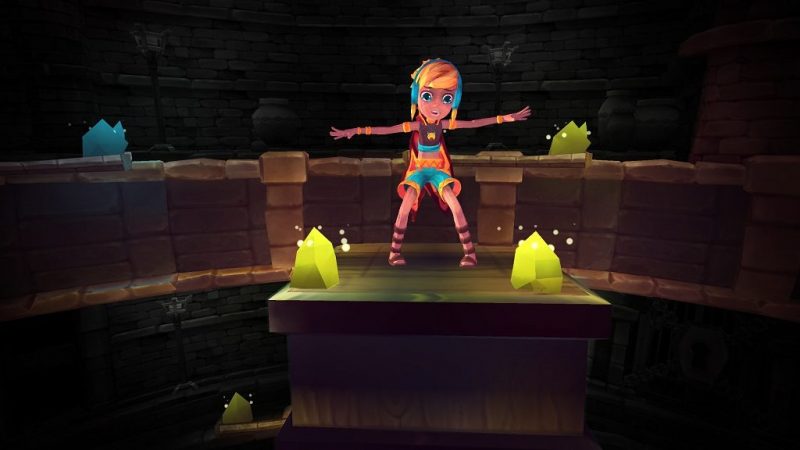 One things that seems to be managed well on the Mobile VR devices is the developers seem to push the presentation in the games, and Skullfish Studios have brought some great presentation in Lila’s Tale. When it comes to the visuals it really sets the lighting of the whole game well, and with the light on your head being all that is lighting up Lila’s path this was essential. When it comes to the design of the characters and the dungeons they give of a sort of water-colour vibe, which brings some vibrant visuals in the parts you are lighting up on your way.

The audio is a bit basic with the music playing in the background, and then the general noises like Lila’s footsteps, some scared noises from Lila, the interacting with the objects, and chimes when you are joining the paths in the puzzles. However, with this game not telling the story using words and what the game is trying to offer, although the audio is basic it is all the game needed.

As I previously mentioned one thing I love is the game manages to tell its story without any spoken words, this is done between the levels with again water-colour style cut scenes. All of these are beautifully put together with the expressions and actions of the characters telling the story for you.

The game can be played either standing or seated, but you have to make sure you can turn in 360 for the game, because you are placed in the centre of these circle levels. I found it was best playing it on my gaming chair for the 360 spinning. But, where the tracking of the controller and the brush was not an issue, there was a few errors caused by Lila following the light attached to headset movement. Sometimes as you tried to look about to levels to get an idea, she would follow your light, and in some cases it was into the enemies. But, other than this slight issue occurring a couple of times, they have managed to create a great control system for the game.

The game comes with nine levels and for the older gamer the challenge wont come in until you are about five levels in, meaning that it really wont last the older game more than fifty-minutes to an hour. Unfortunately after this the game does not come with any replay value, as there is no secrets to unlock or hidden items to find. However as with a lot of the Mobile VR titles they are priced moderately and Lila’s Tale will only cost you £3.99.

Lila’s Tale is a short but enjoyable puzzler for your Mobile VR headset. Which brings with it some beautiful visual presentation, that has allowed the team to tell a story with no need for spoken words. Given what the game is offering it will certainly be something the younger audience will be entertained with, but the older gamer might find it all a little too simple. With the lack of replay value it is hard to say it is an essential purchase if you have no children to share the experience with – but if you do fancy a short puzzle game for £3.99 it’s worth considering.