Moss is one of the few VR games we have played through on multiple occasions and loved every time we have played it. Also, it still holds out as one of our most recommended and favourite VR games – on all platforms to date. So, we were really happy it was going to get released on the Quest, we have now played through the Quest version – does this version hold out as well as the others?

Moss starts in what looks like a church, and you are placed in front of a large hard-back book. You will then turn the page manually, and a softly spoken narrator introduces you to the wold of Moss with some back story. While doing this the story is told as the pages become painted and animated, soon you are teleported to the world and piece of glass falls from a tree. You are soon introduced to Quill, who finds this piece of glass, suddenly there is a blast and you introduced to the game and the world as Quill’s guide – named the reader.

From here you will start on your adventure together, as you become immersed in the world and the storybook fantasy world the team have Polyarc have put together beautifully. As your adventure goes on the narrator will fill in the story, be a voice over in the games world or returning to the book, this is story you really need to take in.

At heart Moss is a third person puzzle platformer, but it brings with it a taste of adventure. The gameplay is made up by working as a team with Quill in order to get through the world in front of you. You will find a large number of the puzzles are similar in nature, with the main mechanic being moving parts of the world you can interact with as the reader, in order to clear or create a path for Quill. The parts you can interact with will have a pattern on and get a blue glow, where this all might be a bit simple, the game also introduces weighted switches, levers and poles you will to hit. This will not always be possible as Quill, so you will need to figure out how you can help as the reader to make it possible. These are never overly complex and you will work them out in a short time, but this makes it so nothing is taken away from the beautiful world and game that is front of you.

They then introduce some combat, which can be enhanced with the free DLC that launched with the Quest version, which I will touch on later. The combat is not overly complex as it uses a hack-and-slash style, if you play with the standard sword not ones unlocked when completing the DLC you will have you sword and the ability to dash dodge. So, the combat becomes a job of timing your attacks and dodges in time, but, if you have the different enemy types on the screen at the same time, they can damage each other. Meaning if you start to get a bit overwhelmed with the number of enemies, this can be used to your advantage.

As the Reader you can also assist Quill in the combat in a couple of ways. Firstly if Quill takes damage you can use your orbs to heal Quill. You can also grab the enemies, which will slow them down and give you chance to deal with others or even strike the one you are holding, but, this automatically lose your grip on the enemy.

I just want to add lastly that the game ends with a boss fight, and that is all I am going to say. But, once you get to this point you are in for one hell of treat, because this is a fantastic set-piece of platforming action.

Around the world of Moss there is two types of collectables, some dust and then scrolls. The dust is easier to find than the scrolls, as this is just collected from breakable objects around the world like crates and barrels. The scrolls on the other hand are well hidden around the world and not easy to get to or always in plain sight.

Throughout the story and the gameplay you will really build a connection to Quill. Which for what the game is doing, that was going to be essential and Polyarc have done an outstanding job in all aspects to make sure this happens. This is done through the overall animation and little interactions with Quill. 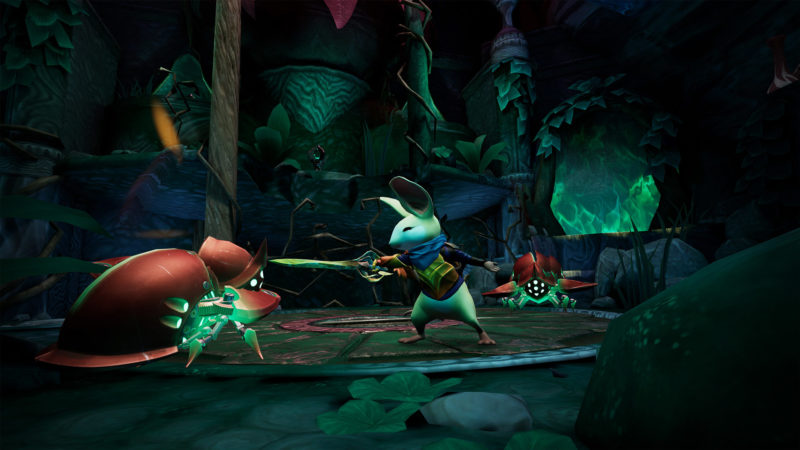 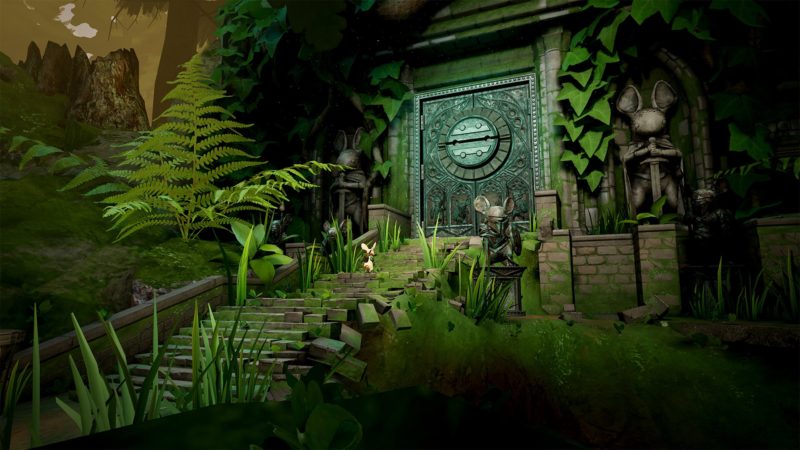 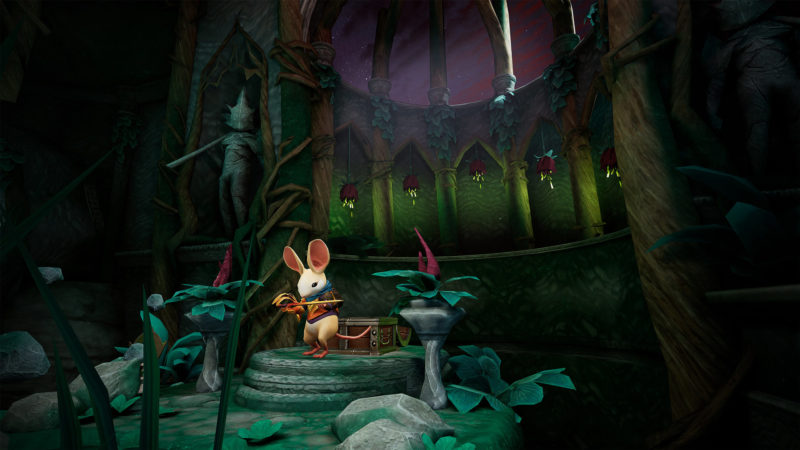 Add to this the in-game interactions with Quill, and it really builds that bond and gives you feeling of the carer, in your position of The Reader. At any point if you hover your orb over Quill and use the grab buttons you can stroke her and she shows the delight on her face. Another one of my favourites is sometimes when solving the puzzles she will gesture for a high-five, you can do this or if you leave her hanging she will show some frustration and high-five herself.

With the jump to the Quest we were really hoping the team dealt with the reduced power we have gotten used to on the other platforms when it comes to the presentation. We are happy to say the Polyarc have worked with this perfectly, with the reductions coming in all the right places. For example; the removal of the water effects if you touch the water with your orbs as the reader, and the reduction in clarity on some of the extra detailing in the environments. Even with the reductions mentioned the world of Moss and over all visuals in the game keep you just as immersed, and do not ruin the experience in anyway.

One more thing that I really liked and that added into the immersion they’ve built through the presentation, is the ability of looking around the world. You can actively lean into and take a closer look at the world and also Quill, with the later reacting to you doing this.

With this being available on the Rift, the team have just ported over the controller settings from that version, which are perfect for the game. Each controller in each hand is going to represent the orbs you will use as the reader to interact with the objects, with the analogues and buttons being used to control Quill. The game is best played in seated position, and leaning into the world to have the look around – this is going to be important for finding some of the aforementioned scrolls in the world. Also the inside out tracking works perfectly for the game and we did not have any tracking issues once while playing the game.

The base game is going to last you around two and half hours, however, the addition of the Twilight Garden DLC adds around an additional hour to the game. The DLC is located about the world of Moss while playing the base game, all you need to do it look out for the places you can open the portals. When in the new puzzles in the Twilight Garden DLC, you will get new costumes and abilities for the new swords that can be used in the base game and not only the new content. Meaning you might find it nice to play through again using the different weapon. But, if you just play through the base game and DLC switching between the equi

Moss has made a seamless port over to the Oculus Quest, and playing through it again on another platform has cemented it either further in our top VR games. The team at Polyarc have put a lot of love into every aspect of the game, and it really builds your bond with Quill, through the connection and interaction you have throughout the game. The only issue being the length and the feeling of wanting more it leaves you with, even with the added Twilight Garden content. However, Moss now becomes a game you must play on another VR platform, so if you have the Quest, don’t miss out on this gem.
Buy Moss
Paul Manton August 15, 2019