Since it’s announcement at E3 (Electronic Entertainment Expo) 2017, Moss has been high on my radar of VR games I was looking forward to – along with plenty of other people also. Well the time has come for people to get their hands on the game, but does it match the hype that has built up to it’s release?

Moss starts in what looks like church setting, and you are placed in front of a large hard-back book. You will then get turn the pages in the book using the controller, as a softly spoken narrator introduces to the world of Moss with the a back story. While doing this the pages are become painted and animated. Soon you are blinded by a bright light and you are in the world, as the piece of glass falls from a tree and Quill is the one to find it, suddenly there is blast from it and you are introduced into the game, as Quill’s guide – named The Reader.

From here you start your adventure together, and become immersed in this storybook fantasy world the team at Polyarc have created. As you adventure through the game the narrator will provide more details about the story as a voice over as you progress, and in some cases you will return to the book setting. I really don’t want to say any more about the story, it really is something you have to experience for yourself.

The game is a really a third person puzzle platformer at heart, but also brings an element of adventure with it. The gameplay really is working as a team with Quill in order to get her through the world in front of you. A lot of the puzzles are similar in how they work, with the main mechanic being moving parts of the world (which highlight in a blue glow) to help create or clear a path for Quill. However, where this all might a bit simple, they do include other elements like weighted switches, levers and poles you will need to hit. Now, doing all these with Quill is not always possible, so it is up to you to figure out how you will manage to do this, while still having full control of Quill. I mean the puzzles are never overly complex and you will work them out after a short time, but at first they can be confusing as the game really doesn’t offer explanations of the puzzles, it is all down to you at first.

They then add some combat in the game, but this is not overly complex and for me gives that hack and slash feeling. You will only ever have a sword and the ability to dash dodge, this is why you will get that feeling. It is all about timing your attacks and then dodging in time. Although when you get a number of enemies on the screen, the different enemy types can damage the others. Where this is not to a great deal it can come in useful if you are getting overwhelmed.

So, what is your job as The Reader, other than assisting with the puzzles? Well you can also help Quill in a number of other ways with your floating orb, and not just the puzzles. If you are struggling at times with the amount of enemies you can grab one of them, which will slow it down. You can also strike it as Quill while you have control of it, but this will release it from the hold, and you instantly need to dodge it’s attack – but it can be useful in moments when the battles get busy.

Now, the game does end with a boss battle, but I am not going to say anything about it other than you really are in for a treat with this set-piece.

Around the game there is two types of collectables the dust you collect by smashing objects like barrels, and then scrolls hidden around the world. There is trophies for collecting all the dust and the scrolls. As you would expect the dust one does not come with much puzzle, as mentioned it is just about smashing all the objects you can. However, the scrolls come with a bit more challenge as these can be hidden well in the world, and it’s not as simple as them being within sight – which I will touch on later.

Through the story and gameplay you really do build a connection to Quill. Which for me was going to be essential for this game and the team have done an outstanding job in other aspects to make sure this happens. This is the overall animation and the way they make you interact with Quill. 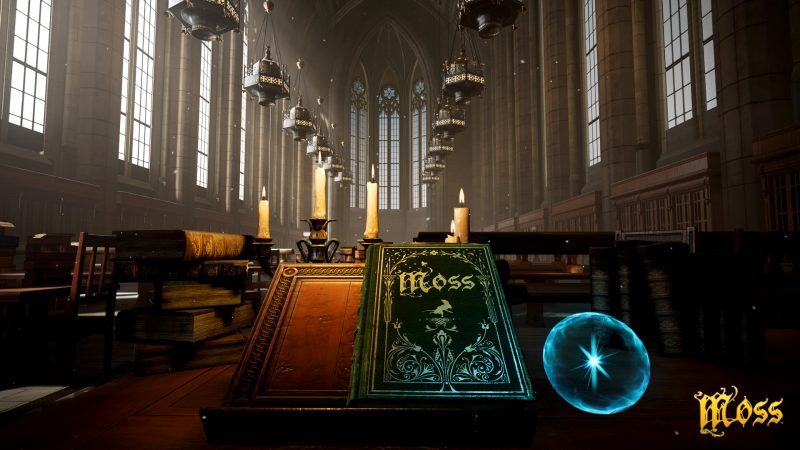 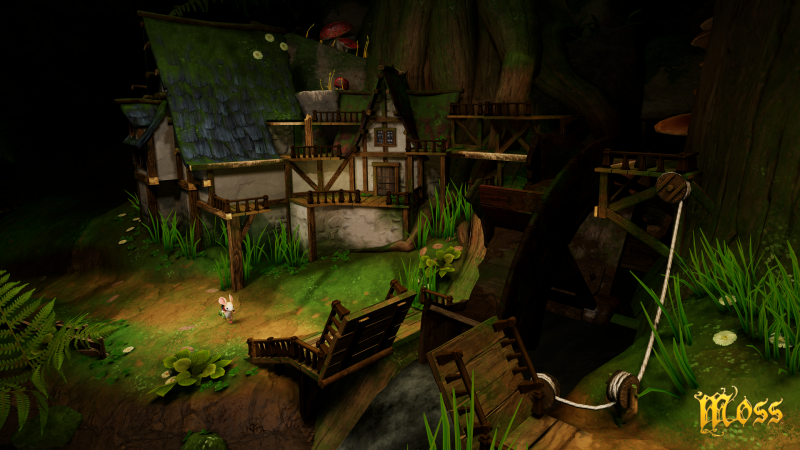 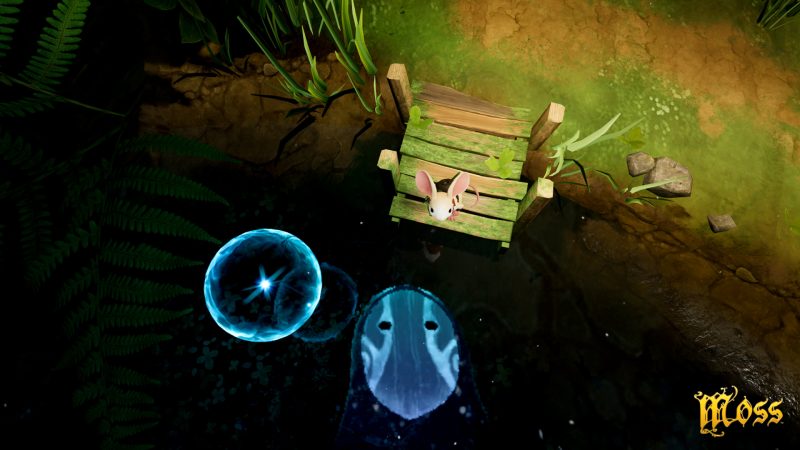 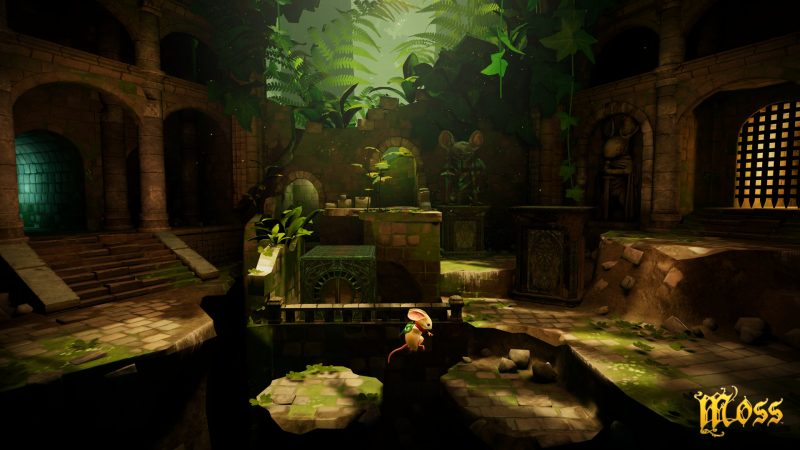 Add to this the in-game interactions with Quill, and it really builds that bond and gives you feeling of the carer, in your position of The Reader. At any point if you hover your orb over Quill and use the grab buttons you can stroke her and she shows the delight on her face. Another one of my favourites is sometimes when solving the puzzles she will gesture for a high-five, you can do this or if you leave her hanging she will show some frustration and high-five herself. Also, that carer feeling comes in because if Quill takes damage in the combat, you will have to grab her to heal her – in turn making you really important to her survival.

Add to the fantastic design and animation of Quill, a world that is rich and lovely looking, and it really makes for near perfect presentation. The game takes you through a number of settings in the world of Moss, and all of them are just as beautiful as the last in their own way, be it the lovely full leafy forest you start in, to the brief stint in a sandy area. There is going to be at least one part in each chapter that will make you stop and take in the beautiful design of this world. Like a deer in the forest, this added to the previously mentioned sense of scale, as the deer was huge compared to Quill. Also another lovely touch was the refection of the The Reader in the water if you looked down, for me The Reader design came straight out of Studio Ghibli.

One more thing that I really liked and that added into the immersion they’ve built through the presentation, is the ability of looking around the world. So, from what was known about the game you may think it’s a puzzle platformer when you sit and play out the game – that is not the case. You can actively lean into and take a closer look at the world and also Quill, with the later reacting to you doing this. The best thing about this is the game looses no clarity in visual quality when you do, making for many ways to take in this outstanding looking world.

The game is only playable with the Dualshock controller, but given the fact the game is a puzzle/platformer and the way you need to control Quill, analogues are required – meaning the team really had no other choice. Your only real actions outside of controlling Quill, is tracked with the motion controls in the controller, and the triggers to grab. The game is best played in seated position, and leaning into the world to have the look around – this is going to be important for finding some of the aforementioned scrolls in the world. Overall everything about the controls came off as very responsive.

The game does recommend at the start that you place the camera in front of the TV, but given my set-up I just angled the camera down to where I was sitting. Now, this did cause some slight issues with the tracking of the orb, but this was very little and really down to my persistence to move my camera.

There is one area the game falls down a little bit and that is the length. The game took me around two and half hours to complete, not missing many of the scrolls or much of the dust. I think giving it more time to locate last scrolls and smash everything  and finding all of these on my first play-through, it would probably have extended it to around the three-hour mark.

But, given it’s sort length I can really imagine myself playing through it again and taking in more of the world. Although a little extra would have been appreciated, because as those credits start you are already itching for more content in the game. But, it is all looking positive on that front as the ending leaves it open for more story, be a second lengthier entry to the series or by DLC, I don’t mind I just want more to explore and continue this bond and adventure with Quill.

Moss brings with it one the best experiences I have had so far in the VR medium, it is clear the team at Polyarc have taken a lot care and paid a lot of attention to the game. I have never felt a bond like I have with Quill on this gaming medium before, be it the scaling making you feel like her overseer or the animation and interaction – they really have made something special. Add to this the rich world and the immersion they have created and it is a near perfect game. The only issue being the length and the feeling of wanting more it leaves you with. For me Playstation VR finally has an exclusive that I would honestly say is a headset seller, and worth buying one for.