Pixel Ripped 1989 is finally in our hands, a game I have been waiting to get my hands on for a while now (over a year to be precise). With the idea of playing a handheld console taking me back to my childhood years of the original Gameboy, the question is did this bring back the fond memories I had or make me think it was best left off in past?

The game comes with a story which is told through the main protagonist called Dot, but played out by Nicola – who is a game obsessed kid. In Dot’s world an evil goblin named Cyblin Lord has stolen a beloved stone and figured out how to cause destruction to the worlds outside of his regular video game. Now Dot has enrolled the help of Nicola and her handheld console Gear Kid to stop Cyblin Lord – but can you stop him?

This opens up the gameplay that is going to take place across three different dimensions that Cyblin Lord has managed to open up. The first and most common one is via the Game Kid, this is where you will play most of the four levels the game comes with. This plays out as your typical old school side-scrolling platfromer, but this is a nostalgia trip I was happy to be a part off. Within these parts Ana Ribeiro has shown her love for some of the classic 80’s titles, for example there is a section that plays out like a level from Alex the Kidd.

It’s not just as simple as looking at the handheld console, because you are playing the this game in school. This brings in a the main threat in Nicola’s world… her teacher. Where the game you are playing within Dot’s world does not give you a set number of lives, this is where Nicola and the teacher come in. In the game you are given three lives, you only lose a life if you are caught playing the Gear Kid in lesson. In order to help stop this happening you can fire spit balls at items in the classroom to cause a number of distractions, giving you chance to continue with your game.

The second dimension is Cyblin Lord attacking your reality. These parts play out by using the Gear Kid to aim and shoot down the enemies that are approaching. Like dragons trying to abduct your friends in the playground, but remove the Gear Kid from face and these dragons are actually the pesky pigeons in your world. In away this is a nod to the classic light gun games started to grace the gaming platforms back in the 80’s.

The third dimension is again Cyblin Lord coming into your reality, but he is followed by Dot. In this case it will build a level in full colour in Nicola’s world, and you will control Dot with the Gear Kid still, but it will all be playing out in front of you – rather than within the handheld.

These changes in dimensions from the handheld are all the Boss Fight elements within the game, and they all play well and give Pixel Ripped that extra fun factor than constantly looking at the Gear Kid. Now, this sort of idea for the gameplay really took me back to playing the handhelds as a kid and also brought the frustrations that came with no saves and only checkpoints throughout the levels. Bringing back that challenge I remember as kid, and also the last boss fight was certainly as difficult as they used to be, and took a good bit of time and patience to get through. Which for me a good thing, as it might show these young gamers the perils of gaming in past. 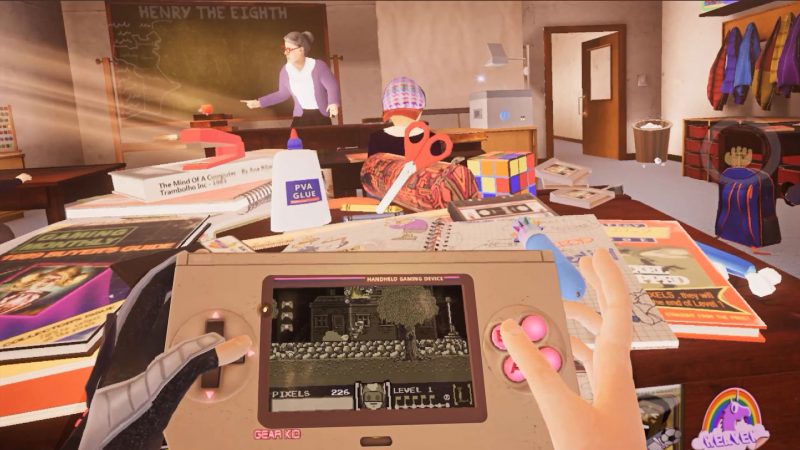 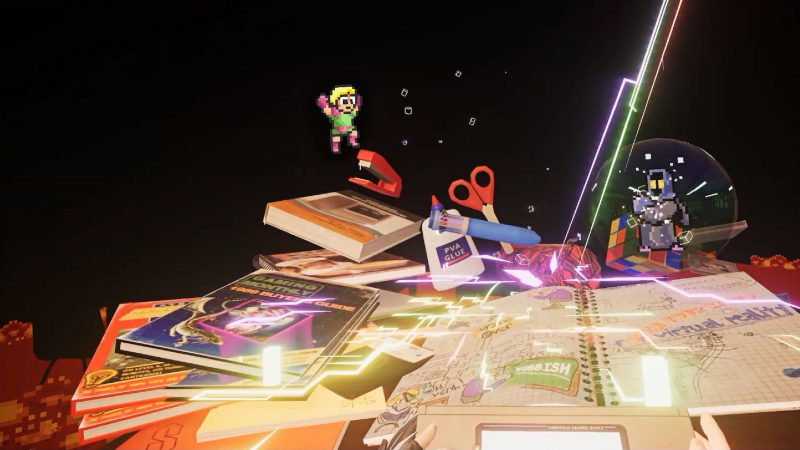 When it comes to the visual side of the game, this also takes place in both Dot’s and Nicola’s world. The story and dialogue are mainly told when you go back to Dot’s world after completing a level, and they have done a great job of bringing the green and black pixel world to life in VR. Then the main part of the game is played in Nicola’s world which all very clear and crisp – which was needed given you have to play the handheld within this world. All the environments you visit from the classroom, playground and headmasters office are all well designed and keep you immersed in the setting.

When it comes to the audio there really is an 8-bit overload in Dot’s universe, with the noises all bringing back those old school feelings. These are then taken into Nicola’s world via the handheld and when Cyblin Lord uses the different dimensions. However, what will make sure that you still feel you are in Nicola’s shoes is the use of the spacial audio when playing the handheld. This really brings all the settings to life, as you can hear the teacher giving the lesson and the other kids in the class all mumbling and talking around you. Making the presentation in general keep the immersion in the game.

Also it was great seeing some familiar faces in one of the levels on the TV in RealityCheckVR and PSVR Frank, although when they first came on the TV I was paying too much attention to that and died within the handheld. Also I then needed to get ‘It’s the Frank show, what? The Frank Show come on’ out of my head.

The game is made to be played in a seated position, giving you that feeling of being sat behind this desk in the classroom. It is played using the DualShock 4 controller, as this is meant to simulate you playing the handheld, so in order to give you that immersion it is required – especially as you see Nicola’s finger pressing the buttons on the handheld and you press them. Your basically only going to be using the analogues to move and the X and Square button, it’s as simple as that. In order to use the spit balls you just need to look at pen and it will will go into your mouth and you just aim at where you want to fire it.

When it comes to the longevity of the game it is going to take you around two to three hours to get through the campaign depending on your skill with plaformers. As I mentioned previously the final boss battle was a challenge, and I found that a good third of my play-through time was this battle at the end. Now, I know you might be thinking… that’s not that much of a playtime, but there is more to it and reasons to go back. First reason the game is worth playing through again and secondly in each level there is five hidden cartridges that can be a challenge to find. Giving you plenty of reasons to revisit 1989.

Pixel Ripped 1989 took me straight back to my childhood and I loved it. You can really tell that Ana Ribeiro has a great passion for video games, and wanted to bring a part of her memories of gaming to life. So, jump between these dimensions in Pixel Ripped and enjoy the truly unique experience it brings. What this games does is bring backs the addictive nature of the those side-scrolling platformers and blends it perfectly with the newer medium of VR. This is a title I don’t think anyone should miss out on.
Shares
Share on Facebook Share on Twitter
Paul Manton July 30, 2018