When Puzzle Bobble VR was first announced, I was not sure if we needed a time-less classic like this in VR. Then I thought, this was how I felt about Tetris, and then loved Tetris Effect. So, it was worth giving the game a go – but, does it work in VR?

Taito put their loved and classic game in the hands of Survios, known for making some great VR titles and working across a number of different genres in their own catalogue. Survios have taken the classic gameplay and put the Virtual Reality twist to it, which in turn makes the game much more difficult – although, keeping it possible to be played by players of any age.

The game comes with a single player story mode, which will see you taking on one-hundred levels, with each level giving you different goals and aims – the better you do the more stars out of three you will score. As mentioned they have taken the classic formula and made it into a three-dimensional challenge using a catapult contraption to fire the bobbles. These of course increase in difficulty as you move through the levels, with new challenges being introduced.

You can also buy three power-ups with the coins you collect through playing the levels, which will give you one to use for free. After this your coins can be used to purchase the extra power-ups for your inventory – and these can become important as you push into the later levels. 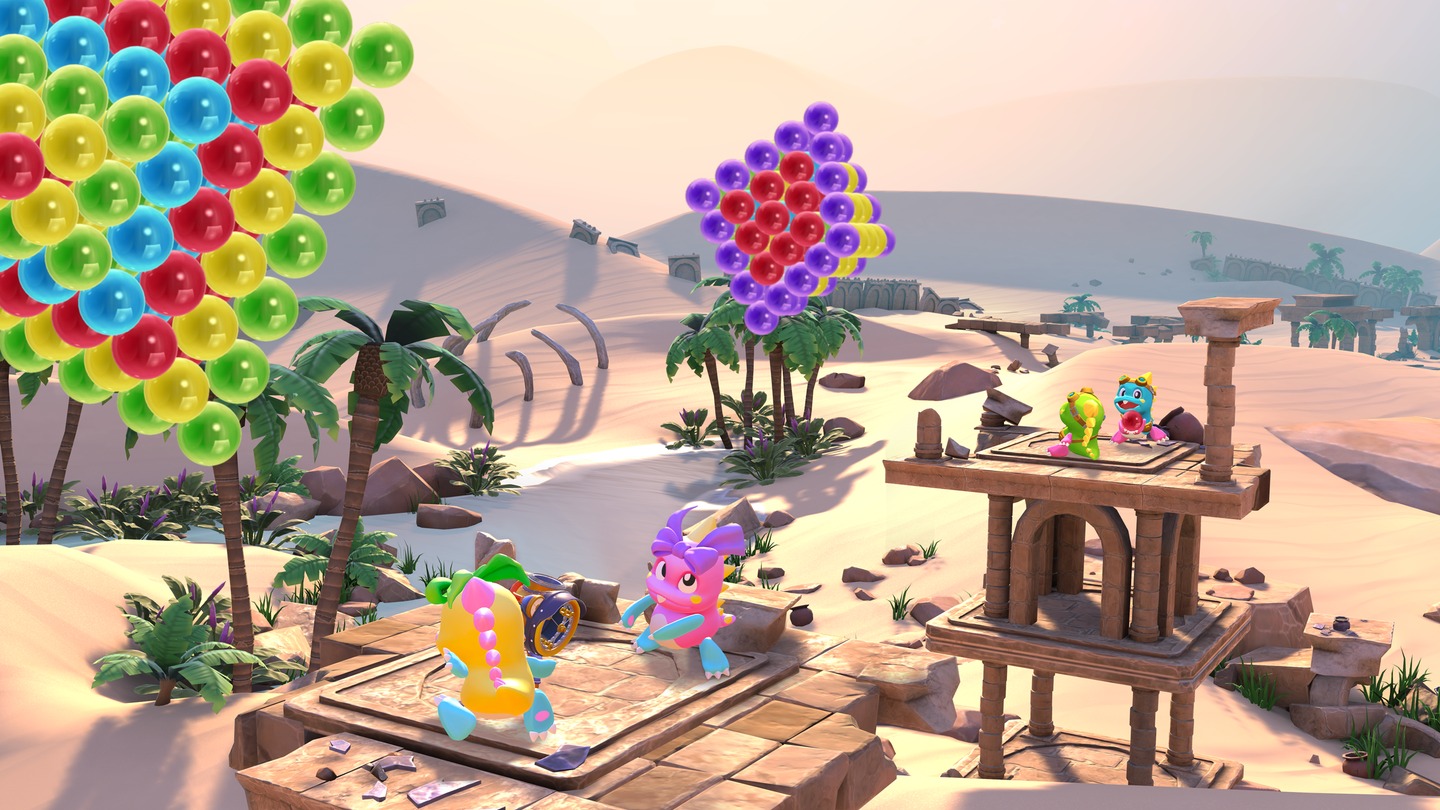 Outside of the huge amount of single player content the game also comes with a 1v1 Battle-mode, but where this is populated at the moment the player base needs to stay for this be a constant option within the game – and unfortunately I do not see people sticking around.

The final option for the game is Infinite mode, where you be taking on waves of levels until you fail, and where this does offer something else to the player, I think many will be trying to get the three-stars on each level – as that is way more rewarding.

Now a few issues that cropped up when playing the game. I found when playing it, is it is not something that I could spend long sessions in – and it was one I went back into for shorter sessions more than anything. Also, you will get some frustrations with the aiming as it can be affected by the slightest movement of your aiming hand – which becomes a real pain on the levels with a small amount of bobbles at your disposal.

The team at Survios have done a fantastic job of bringing the colourful and cartoony world of Puzzle Bobble into VR, and also keeping the game visual charm in place. Everything inside of the world looks very crisp in the Quest with the bright and popping colours. 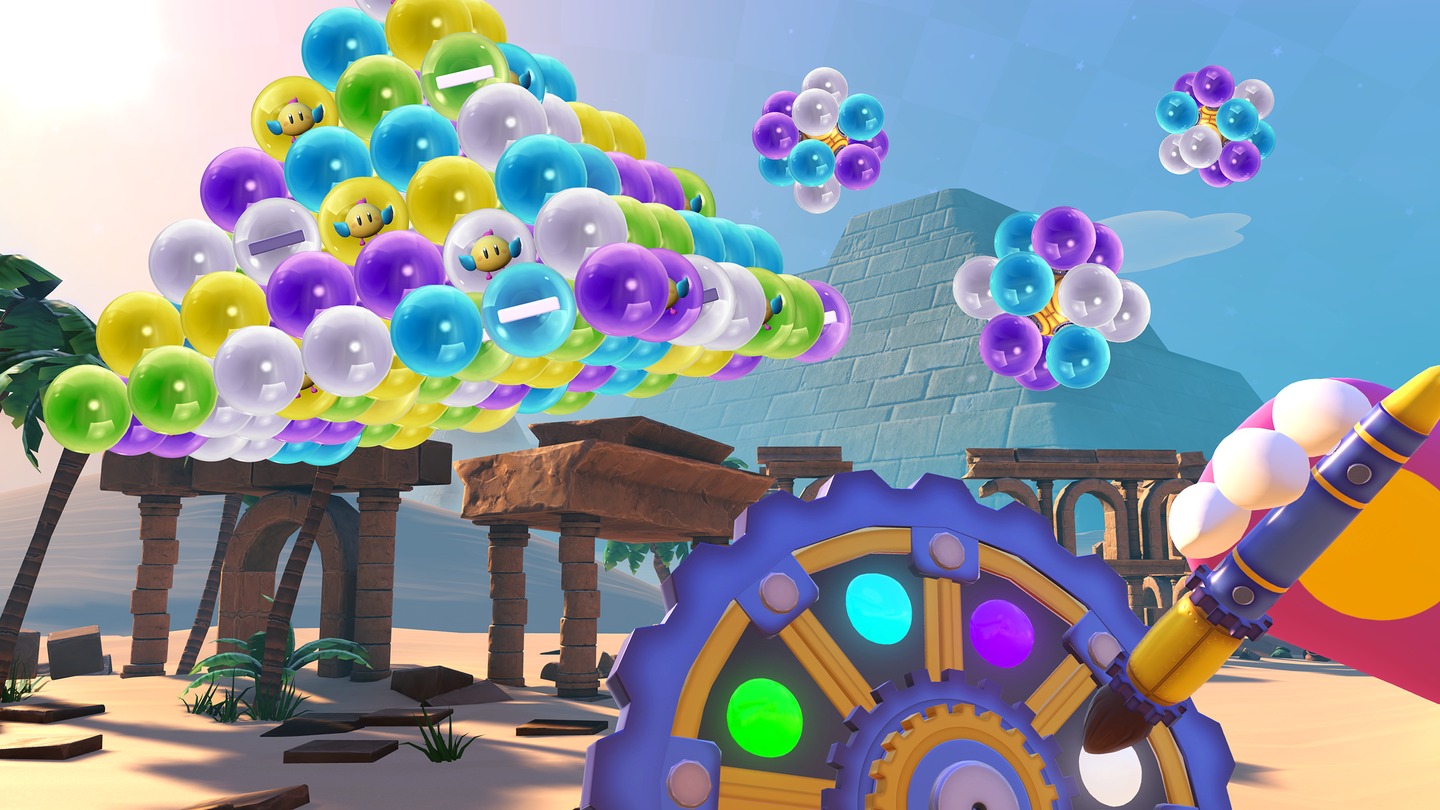 Along with the sound effects from the bobbles popping, you do get treat to some calming background music, which suits with what the game is about. You don’t want over the top music with the calming gameplay the game offers.

When it comes to comfort, there is not a chance anyone with suffer any discomfort with Puzzle Bobble VR, as you can play either seated of standing and you have no motion in the game at all.

Controller wise you are just using the trigger on your dominant hand to place the bobbles into your catapult and pulling back to aim. The only buttons you will need to use in the game is the triggers – again making easily accessible to anyone as with the comfort.

The game comes with one-hundred levels in the single player story mode, which all have a three-star ratings to aim for. Getting through these and aiming to get all three stars in each will give you plenty of single player gaming time. You then get the battle mode, that will suit some as long as the servers can stay populated – however, if not you can take on Infinite mode. Taking all this into account, there is plenty of reasons to jump into those aforementioned short sessions.

The team have done a great job brining Puzzle Bobble in to VR, keeping the charm from the original game thirty-five years after its initial release. Bringing with it gameplay, comfort and controls which make accessible to anyone, and some very clean presentation. However, it does come with downsides to go with the good. Although there is a load of content, it will not keep you in it for long sessions, the aiming can be very frustrating with how twitchy it can be, which can be the difference between completing a level and not. If you are a fan on the original Puzzle Bobble games, you will enjoy the modern take on the classic, but may also be left feeling the VR element was not overly necessary.
Buy Puzzle Bobble VR: Vacation Odyssey
Paul Manton June 16, 2021