When we first saw the trailer for Racoon Lagoon, it left us thinking is this the sort of game the VR is missing? Well we have had time with both the Rift and Quest versions of the game. So, is this what the VR medium has been missing?

The game set’s a very brief story at the start, but this seems more just to set your goal and open up the game – sort of acting as a tutorial. It teaches you about collecting hearts to open up parts of this Island, that you are a spirit of, once you have done this a storm starts and you are asked to try to help a ship in trouble. Unfortunately, your help seems to be in vain as it becomes shipwrecked on your island. However, the crew of cute animals end up taking refuge on your island, so it is now your task to help build this new civilization and fix the islands broken heart.

This opens up the gameplay, which to me takes the feel of Stardew Valley and Animal Crossing mixed – which personally I don’t think is a bad move by Hidden Path Entertainment. The game is all about crafting, collecting and inventory management. The aforementioned tutorial introduces you the basics of the game and gets you started on your crafting, with you then learning more about them from the Nym’s you are helping. Soon you will have all the tools of the trade in the game, and then it’s just your job to work on everything this new civilization will need to prosper.

As mentioned in order to get more of the island unlocked in turn opening more tasks from the Nym’s from that area, you will get rewarded hearts. However, as you progress your tools upgrades might be more important, and you also have to use your hearts and some of your materials to upgrade your tools. So, at points you might have to make the choices of the next area or your tools – all depending on what you think is most important.

In order to get the hearts you will be completed the Nym’s tasks, collecting the materials requested and upgrading the Nym’s shops or giving parts of the island an upgrade. This is where the importance of the tools come into place, for example; you might need a set gem stone to craft an item but your pick-axe might not to strong enough to break the rock – so it would be time to upgrade. After this it’s all just about having the materials needed, be it collecting rocks, wood, shells from the beach, catching fish, watering seeds or feeding animals. All of these makes sure that the game constantly gives you something to do and is a relaxing experience while you do so.

Your only inconvenience is some pesky Racoon’s that will come and steal items from your inventory, in this case you just need to give them a few whacks with your pick-axe and they will drop your item. It is easy to notice when a racoon is about as some music will play, this keeps you on alert and makes sure you don’t get annoyed by not realising some of your goods have been stolen. 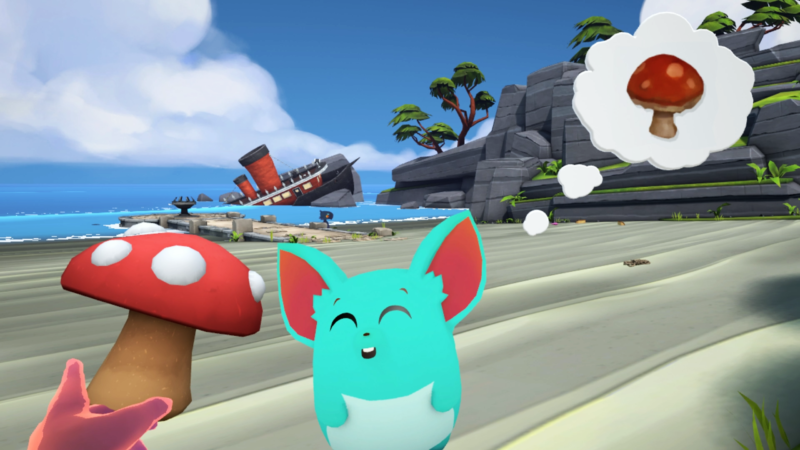 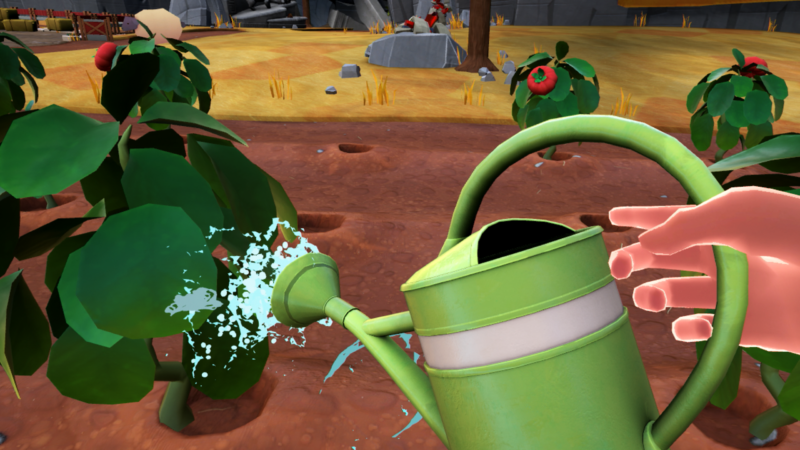 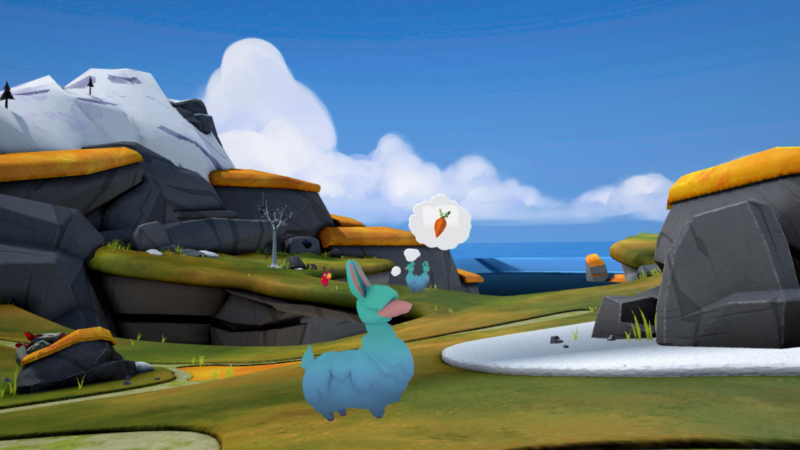 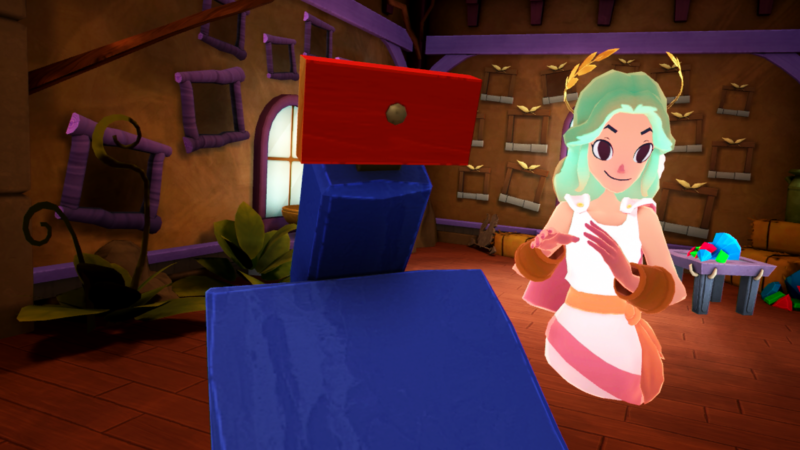 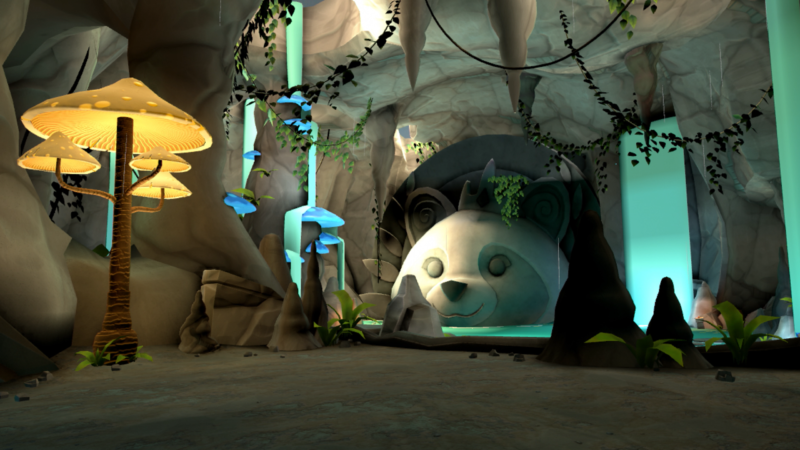 When it comes to your island, you can have others join you and work as a team collecting the materials and upgrading your island. This mode also allows others to come and check out what you have done with your island, as although there is only a set amount of areas you can open as a base, you can personalise your island. This is done within the shops ran by the Nym’s as you can craft items like benches and fences and design your island to be your own. This of course is going to need the crafting materials collecting – making the gameplay loop a continuous one.

With the cute nature of the Nym’s you will be helping, the team took the correct approach with the visual presentation. The game is very bright and colourful which really suits the characters you are interacting with and the feel of game. The island is well design and the game doesn’t only look a great in the Oculus Rift, but it also looks great in the Quest. Every part of the island, the Nym’s and animals on the island are well designed and very clear, making sure you are not taken out of the world of Racoon Lagoon.

I could also find no complaints in the audio design, the narrator that introduces you to the elements of the game has a clear voice. The Nym’s and animal noises give off the cute feeling that matches there look and design, and the environmental noises are done well, especially the sea in the opening part of the island and give you feeling of being in the world. The final element is the relaxing music that for me goes hand-in-hand with these sort of games.

The game is best played standing in my personal opinion but it can be played seated with no issues. You use the touch controllers in the game with free locomotion and the option of smooth and click turning. The rest of the buttons are mapped nicely, to make it easy to open up your inventory and quick store materials or the tool you are using. Keeping that relaxing feeling as you are not really thinking about the controls while playing.

One of the best things about games like Racoon Lagoon is as long as you are a fan of crafting and inventory management the playtime can be endless. You will always been collecting materials to make that next upgrade, well until things are the best they can be, but, also making changes and improvements to your island. So, as long as you are enjoying what you are doing, you will always find a reason to go back for another relaxing session of gaming. However, if you are not a fan of this sort of gameplay mechanic, this is a title that won’t keep you entertained for very long..

Racoon Lagoon brings a fantastic crafting and inventory management style game to VR, which brings the feeling of Animal Crossing meets Stardew Valley with it. You can spend many relaxing hours helping out the Nym’s or just crafting items for this beautifully designed island. If the collecting and crafting sort of gameplay mechanic is your thing, the game will have an endless playtime, but, then if it isn’t this certainly wont be for you. We feel Hidden Path Entertainment could really have a VR gem on their hands here, with both the Rift and Quest versions being a great way to pass some time while having fun.