The VR rhythm game genre is one that is hard to break into the top games of, but this is where indie developers Wanadev Studio decided to go next with Ragnarock. I have now been banging the drums and getting my crew to sail, so have they hit the right notes with the game?

In Ragnarock you will be drumming to the thirty tracks (all with three difficulties) included in the game, with the rock and metal soundtrack being perfect for this being the instrument of choice from Wanadev Studios.

If you think back to the heyday of Rock Band and the drums that came with that game, and you will instantly understand what Ragnarock is bringing to the table, but in VR. You have four drums in front of you in the your Viking boat, and you have the strike the drum with the corresponding runes as they pass over it.

The idea of doing this is to keep your crew rowing to the beat of the drum and getting as far down the river as you can. The more notes you hit and the more accurately you hit them, the further you will go – scoring you out of bronze, silver or gold depending on the distance covered. Also, hitting those runes perfectly will grant you a power up that will give your crew a boost in rowing – which is activated by hitting the shield either side of you. 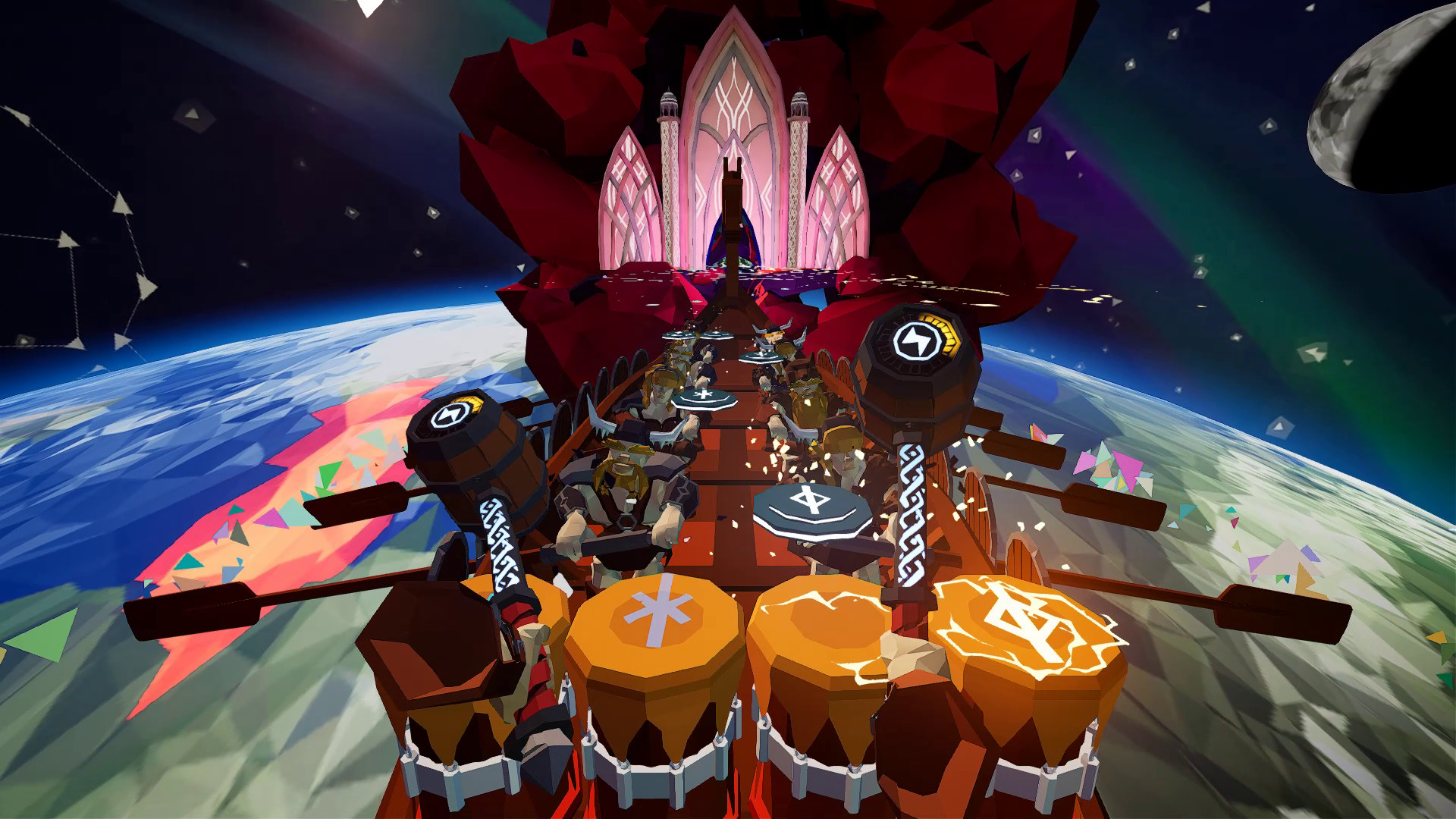 This is pretty much it for the gameplay, but adding the excellent tracks, the one more song feeling, leader boards and the cross platform multiplayer to the enjoyable rhythm gameplay, makes one of the best games in the genre.

The game comes with six stages, all having its own theme, from a plain river to a smelter. Each of the stages are well designed and look nice, although missing some of the extra shine you find on PCVR. The Viking boat and more angular design to your crew make up for what is a very visually clean version of the game, and also makes sure the notes you are trying to hit stand out – a very important aspect of a rhythm game.

Of course the sound is the most important part of any rhythm game, and Ragnarock’s rock and metal soundtrack which has a massive Celtic influence does not let you down, and suits the gameplay perfectly. The audio quality of the songs is perfect, as is the shout of the crew as you activate you power up give them that boost in rowing.

With you being at the drums and only needing to strike these and the shield either side of you, this can be played seated on standing – although nothing feels better than standing at those drums looking over your crew. Also, the team have included many options to change the drums placement and the position, length and angle of your hammers, making it so each player can get it perfect for them. 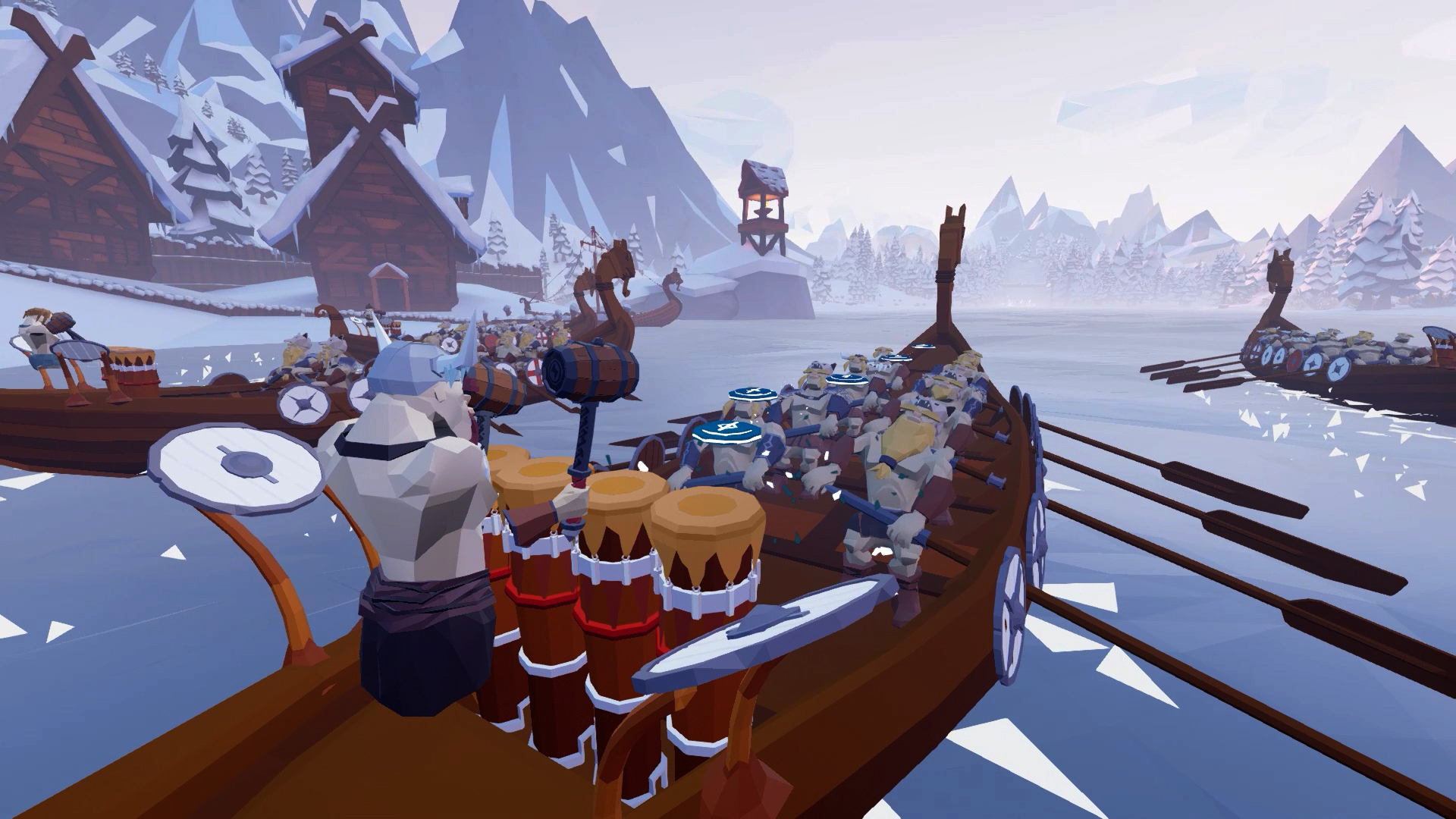 The only time you will be using a button on the controllers is navigating the menus, as once you are in the track it is just a case of hitting those drums and motivating your crew.

As previously mentioned, the gameplay and the tracks really does leave you with that one more song feeling, and you will soon have passed hours in the game without noticing – and you will want to go back for more. Then adding to this the leader boards meaning you can challenge your friends or other players, gives you something to aim for, if this your thing. With the addition of cross platform multiplayer in both quick play and private rooms (at the point of writing this review), you are likely to find many people to play with it not being restricted to that single platform player base – take note Beat Saber.

Meaning adding all of this together, if you enjoy the rock and metal tracks there is endless reasons to go back into Ragnarock

The team at Wanadev Studios have really hit all the right notes with Ragnarock, and make what I would say is a Beat Saber killer. With a great selection of thirty rock and metal tracks, to keep you banging those drums and motivating your trusty crew. Add to this the addictive gameplay that gives you that one more song feeling, while giving yourself a workout at the same time. With the vital inclusion of cross platform multiplayer and leader boards really finishing off everything you want in a rhythm game.
Buy Ragnarock (App Lab)
Paul Manton July 29, 2021