When they first announced the Oculus Quest we were excited to see Superhot was making the jump to the platform. We are massive fans of the PCVR version of the game, with it being the game that introduced the PCVR content to The VR Realm. When we were thinking the game could not get any better, the idea of tether-less Superhot excited us. So, did it improve on a game we thought could not get better?

Story wise Superhot VR does not offer a lot, with a little break between levels with a few lines of dialogue giving you some idea of how it all came together. To be honest when playing the game originally I never really noticed there was an aim to the game until I got told to ‘destroy the pyramid’ near the end. But, this is not a bad thing as Superhot VR is all about the gameplay.

Where Superhot is essentially a wave shooter at heart, which is something the VR medium has become over populated with, the gameplay does something that still makes it stand out to this date after multiple releases on VR platfroms. This difference is that time and the enemies only move when you do, giving you control of the movement of either the enemies and/or their projectiles. Where this may make you think it all sounds a little simple with you having this control it really isn’t, as you really have to think about your movement. Yes, you have that control but does the look over your shoulder give a character or bullet that little time they need to make contact with you? Making you have to plan moves in your head, do you take out the enemy that is close or the one with the guns first… with it always on your mind one move gives them more animation.

When we first got the chance to play the game on the HTC Vive, it came at a time that bullet-time in games was starting to feel a little old. But, doing this in VR at that point gave the gameplay mechanic a whole new feel and made it feel new again, and even though I have played the PCVR version to death, this just doesn’t get old. Now with the tether-less approach on the Quest it brings a new level, as you can dodge bullets Matrix style and not have to worry about the wires – in turn giving the mechanic another new fresh feeling.

What makes this gameplay come to life is the feeling that is was built to be played in VR, and that it really is your choice how to take on each wave in the action sequences. This brings in strategy to the game, outside of the aforementioned need to plan your movements. Do you use guns, throw objects, use your fists or the special ability you get later in the game. Each sequence can be done how you want, but you may want to consider your approach and when you want to use the guns. One thing you can guarantee is you will fail, and then you know whether to plan differently for your next attempt. 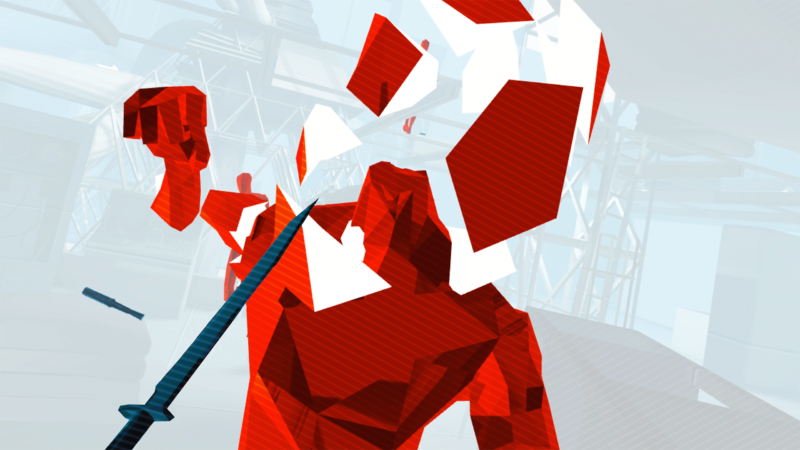 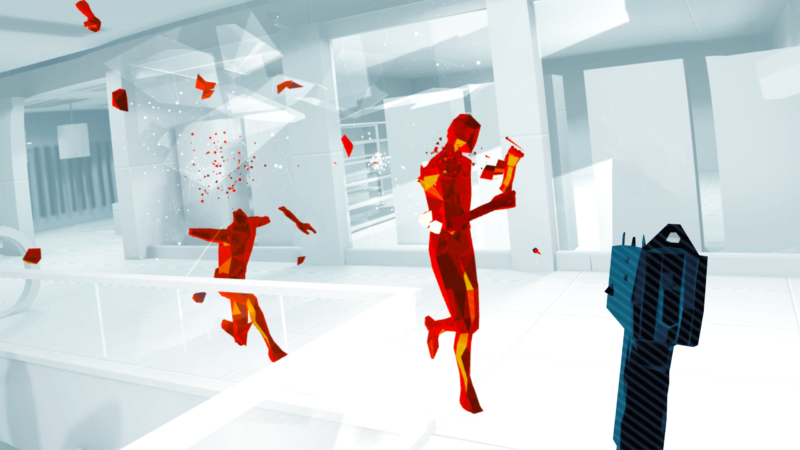 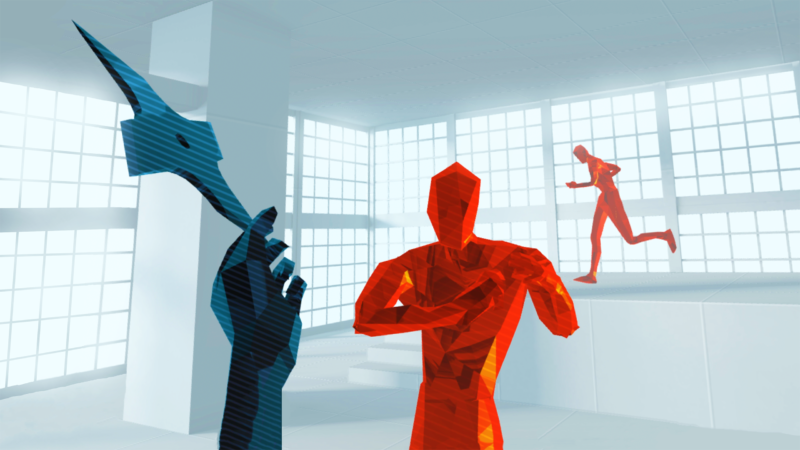 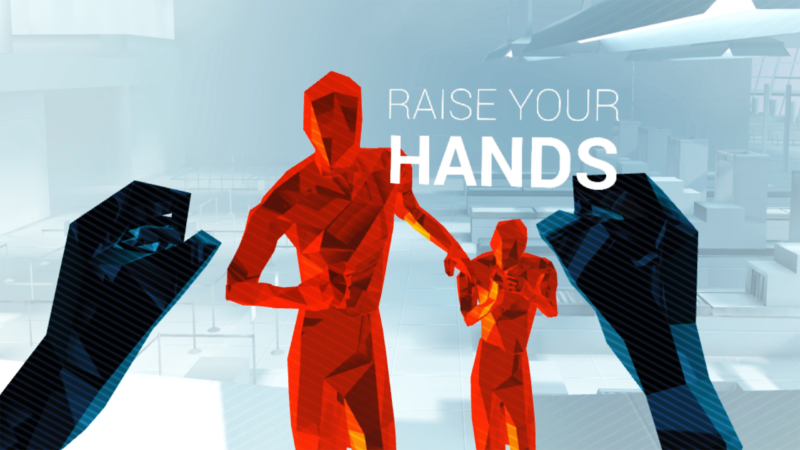 Now, visually you might look at Superhot VR in videos and think it’s nothing that special – but for the hyper-realism used in most shooters just wouldn’t work for this. The simple approach to the visuals really does work, and even though you would think it could take away from the immersion, it surprisingly doesn’t. The three colour system really helps you out in the game and planning your moves in the action sequences. When it comes the Quest port of course there is some shine lost in the presentation, but again the simple three colour design makes it not take away from the experience, with it still looking nice within the HMD – and still suit the game perfectly.

As with the visuals the audio is simplistic also, but again this all the game needs to keep the feeling it is going for. The atmosphere is built using a wind sound, this gives the clear indication of when time is moving and how quickly. Then you have the smash noises when you hit your enemies or they hit you, the sounds of you grabbing objects, the sounds of the objects smashing and of course the weapons when you use them. But, this completely suits the game and does not break from the experience or the immersion.

I have only played the game standing on both the PCVR and Quest versions, and really feel this is the way the game was made to played. I have not tried to play seated although I can not see why it wouldn’t work, I think the dodging and ducking would be a major frustration and obstacle if playing that way. The game is played using the touch controllers that will represent each hand in the game, and the only buttons you will use are the grips to grab objects and the triggers to fire the weapons, this keeps that immersion with the controls, and makes sure you can concentrate on the task at hand.

Even with my experience on the PCVR version of the game, it still took me around an hour to get through all of the stages in the base game. With my original PCVR play through taking around two hours – if you have not played it before. The fun does not stop there though, the game beings an endless wave mode, so you can see how many kills you can get before being hit to bring some extra longevity. However, I found the main expansion to the longevity is taking on the stages again and setting yourself challenges, like not using guns (when not needed for parts), only using throw-able objects or your fists – you really can have fun with these sort of challenges.

Just when we thought that Superhot VR could not get any better, the Quest port proves us wrong. This is the ultimate way to experience the game, with the tether-less design just allowing you that freedom the game needs to reach maximum level. With very little differences in the games looks given it’s simple but effective three colour design, you really aren’t missing much from the PCVR version of the game. With it’s only really downfall being the length of the actual campaign mode, but there is many reason to jump back in. If you own a Quest this is must have in your library.
Buy Superhot VR
Paul Manton August 28, 2019