We are still a big fan of the PlayStation VR version of the The Persistence, but now it has made it’s way to other platforms as a standard game – but of course the PC version has the VR mode included. From the day this was announced we were looking forward to jumping into The Persistence again and checking it out on PC. We have now experienced the PCVR version, so, what did we make of it?

In the game you are placed into the shoes of a security officer known by the name of Zimri Eder, well not her directly but a clone of this once living person. You are aboard a colony ship called The Persistence that suffered a spark gap event while jumping, unfortunately this has placed the ship right near a black hole that impossible to stop. To make things worse this black hole is really making the clone printer within The Persistence play up, and it is printing mutated versions of your previous shipmates. You are the last survivor on the ship, but the question is can you restore it and find your way back to earth?

The team at Firesprite have described their game perfectly as a rouge-like/stealth/horror title. With this is mind it means one thing permadeath, but do not worry as the ship will just print another clone for you try that deck again. Meaning you have to be careful and aware of the fact a death mid-deck and you are starting that deck again.

The way you are going to survive The Persistence is with the games combat, and this is where the stealth element is going to come into play. The games enemies can be unforgiving, so you can try and take them out as stealthy as possible, which is something we would recommend – because if you alert a number of them at once, there is a high probability of death. But, if you are the care free gun-ho sort of person this will become an option, as the game will allow you to become the hunter and not the hunted. This is due to points around the ship allowing for weapon fabrications, which will offer you a number of different weapons in the form of firearms, melee and some secret-prototypes. Although, before you think lets take this room on in a blaze of bullets, remember you will loose them if you die.

As well as these points around each deck, you will also get an upgrade system in the game. This offers you the chance to update you core stats, create new suits, upgrade items and any of the weapons and clone a copy of of dead crew mates using the DNA collected. This adds a bit more depth to game, as these upgrades will be essential depending on your style of play – the good news is these upgrades are permanent, meaning each death and upgrade will help you get closer to that goal.

As mentioned previously you can expect to die in The Persistence, and there is another nice touch that keeps the game feeling fresh, never mind how often you die. This is done by the game having procedurally generated decks, meaning the layout will change when you die, which stops the feeling you are moving through the same corridors and rooms each death. Making it a challenge each time as you also have no idea where the enemies are and the paths they take, with you not repeating the same steps.

This is where that horror element comes in game, with the look and feel of being on The Persistence. At first the game does give a creep unnerving feeling as you set out of your objective on the first deck. But by the end of the this first deck you are soon feeling the horror element to the game, as you start getting jump scares from doors malfunctioning, pipes bursting and more agile enemies scurrying past corridors and the noises around you.

To add to the feeling of horror from what you are seeing, the team have also used the looks of the game and the sound to build up tension and atmosphere very well. The ship itself sets that sci-fi feeling, and the textures used are cleaned and well polished with reflections that look great in the ships interior. Of course you are carrying out the objectives requested due to the bad condition of the ship and with the game offering that horror feeling, it meant the lighting was going to play a huge part. I am happy to say I feel the team got this spot on. Not only does the lighting suit the condition of the ship, but in the areas you need a flash light, this does not overly light up the environments. All these touches start to build that atmosphere and really give you that feeling of being alone.

Adding to the visuals is the correct use of audio in the game. Again as with the design and textures, the team have used the correct sounds and ambience to match the state of the ship. Be it the general noise like the hum of electricity from exposed wires, and the background music used to set the tension as you explore the decks. With the grunts and groans for your ex-shipmates finishing off the audio and atmosphere, that really keep you immersed in The Persistence.

The game can be played either seated or standing, it’s all down the person preference, however, as with the PSVR version I found myself playing the game seated. Within the options there is a plethora of comfort options from different locomotion settings and vignettes – meaning it can be changed to suit the user and their level of VR legs.

Now one area this might fail to connect with the PCVR audience is the controls. As with the PSVR version the only way you can play The Persistence is with a gamepad, which is more accepted on PSVR than it is PC. The game does play well with the gamepad, so it’s not like it is a bad thing overall, but with the PCVR controllers offering a lot more functionality that the Move controllers, you just feel these could have been utilised fully on PC. 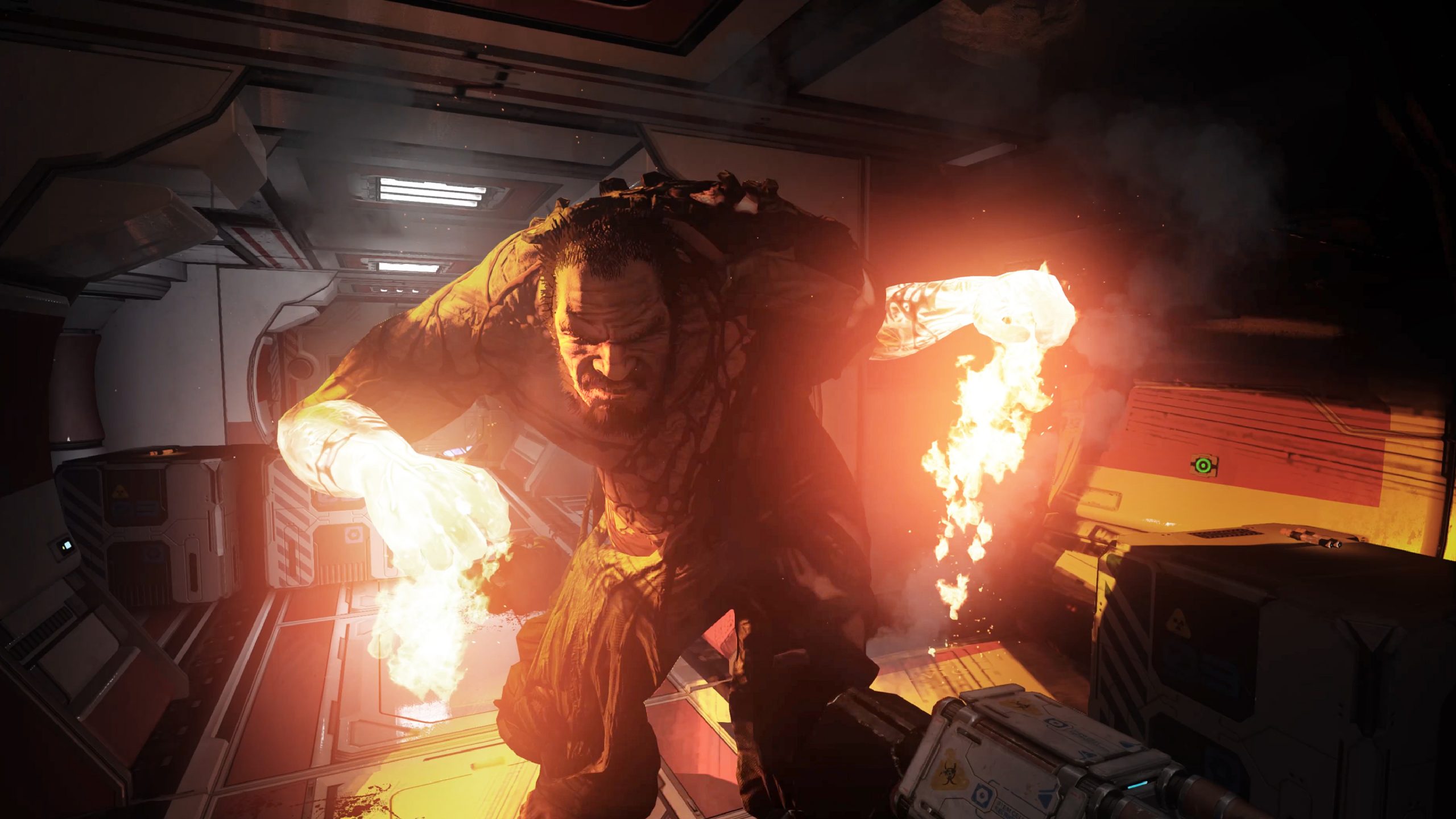 When it comes how much playtime you will get from The Persistence it really boils down to how well you are going to pick up and handle all of the elements of the game. The campaign mode we found lasted around eight-hours when we first played it, but it does offer reasons to return.

Firstly, your campaign completion time is recorded, meaning you can go back in and try to beat this time. Also on the completion of the campaign you will unlock a survival mode, where you get the old school approach. You are essentially playing the camping again, however you are restricted to ten clones – making this one for the hardcore players to take on.

Then with this being released around two years after it’s PSVR counterpart it means Glass Cannon and First Blood challenge modes are already available. In Glass Cannon mode you have one hit point and a powerful weapon to make it to an escape pod, and First Blood mode sees you trying to get to an escape pod with a knife and no shield – both modes offering a good challenge for players.

As aforementioned the games now comes with a standard/flat screen mode included. We have not really spent much time in this mode, given were reviewing the VR version of the game. But, if you want some downtime from the VR mode, you can always visit the game on your monitor.

Nearly two years after The Persistence was released on PlayStation VR users on other platforms are getting to see what they have been missing out on. The game offers everything it describes itself as through great gameplay, the setting and the fantastic atmosphere the team have built. With the only element that may deter PCVR users is the gamepad only option. However, we would recommend still diving in The Persistence and giving it a chance, we are sure you wont be let down.
Buy The Persistence
Shares
Share on Facebook Share on Twitter
Paul Manton May 20, 2020