When Skydance Interactive announced The Walking Dead: Saints & Sinners, the first thing that came to our mind was a cash grab on a popular TV Show. More because this is how most TV show and movie games feel, however, previously we have been surprised how well these can be handled in VR. We were glad when we found out this was not a simple cash grab, when playing it on PCVR. Now it’s available on the stand-alone device we had to check it out – but, does it hold up?

In the game you are placed into the position of a character known only as ‘The Tourist’, who has befriended an old-timer named Henri. As you make your way through a flooded New Orleans, searching for a hidden military stash of food, meds and military grade weapons – so you can take your half. However, in your way are not only hordes of walkers, but two warring factions in the city, who are very wary of you and can be found in shoot-outs in the streets. The question is can you complete your mission of finding this stash, taking your half and getting out of New Orleans?

With how the game plays out and inline with the TV Show, the main element of the gameplay is going to be about survival. With this in the mind the team at Skydance Interactive have brought in the Crafting system that is now ever-present in survival games, meaning you are going to be collecting materials as you go about your daily tasks while searching New Orleans. These materials need to placed into the bin within the bus you are using as your home, and then you can use the crafting tables outside to make food, meds, weapons and ammo. You also have to keep in mind your crafting tables also need upgrading to unlock what you can craft, and also provides you with some upgrades on the way.

Then the second most important element in the need to survive is, combat to defend yourself and stay alive. This is by-far our favourite part about The Walking Dead: Saints & Sinners, the team really have managed to get this perfect and feeling so visceral – as you would expect in The Walking Dead universe. From sticking the first handmade shiv into a walkers head and having the struggle to pull it out, to shooting the guns in the game it all feels so weighty and well done- and does not start to feel old through-out the whole game. As you start to find or craft more weighty weapons these will require two hands to use, and they have also done a great job of simulating the difference in weight in the game, with the struggle you will have holding them in one hand really adding to the immersion.

The final elements that pulls the gameplay together is your inventory, health and stamina management, and quests – three other much needed staples from survival games. For inventory management you have a backpack with so many slots, meaning in some cases you might find yourself needed to sort items if something more important is located on your way around New Orleans. The majority of the quests you will receive throughout the game come from The Resistance, but you will get the chance and become involved with quests with the factions, which can lead to killing members of the opposing faction, so your choice does become final in this matter.

The game will start with a minimal amount of walkers in the streets during the day, however, as it gets later you will find more. But, one important thing is you must listen out of the bell-toll as it gets later, as this will attract the horde and you will be over-run and struggle to survive. To get past that elements you need to get back to your bus and sleep, however, doing this will increase the amount of the undead found during the day and supplies will also dwindle – adding a little more to the survival elements. But, this is where our main issue came in with the game, you can only save by travelling or sleeping. Travelling passes time and brings you closer to night time and sleeping has the aforementioned effects – we just feel they should have used a more manual saving system.

Visually we were blown away by what the team at Skydance Interactive have done on the stand-alone device with their port of Saints & Sinners. This is one area we were concerned about, as after playing it on PCVR first the style of the game and visuals played a big part in the experience. But, as soon as you enter the world on the Quest, you will likely question how is this possible on the stand-alone device.

The presentation of the visuals really give us the feeling of the Telltale games design aesthetic, while also making them feel like their own. Where there is not much foliage and most of these textures being more flat, this does not take away from the immersion or appeal of the visuals – and it’s what the team have needed to do to get it running and looking great on the Quest. The walkers and NPC’s look great as do the main textures of the environments, making for one of the best visual experiences we have had with the Quest.

In the sound department you are going to get what you would expect in The Walking Dead universe, environmental sounds mixed with the groans of the undead and the noise of the arguing factions as they fight it out over the area. This is rounded off with very strong voice acting for the characters you will be interacting with through-out the game. All really rounding off the experience provided by the visuals. 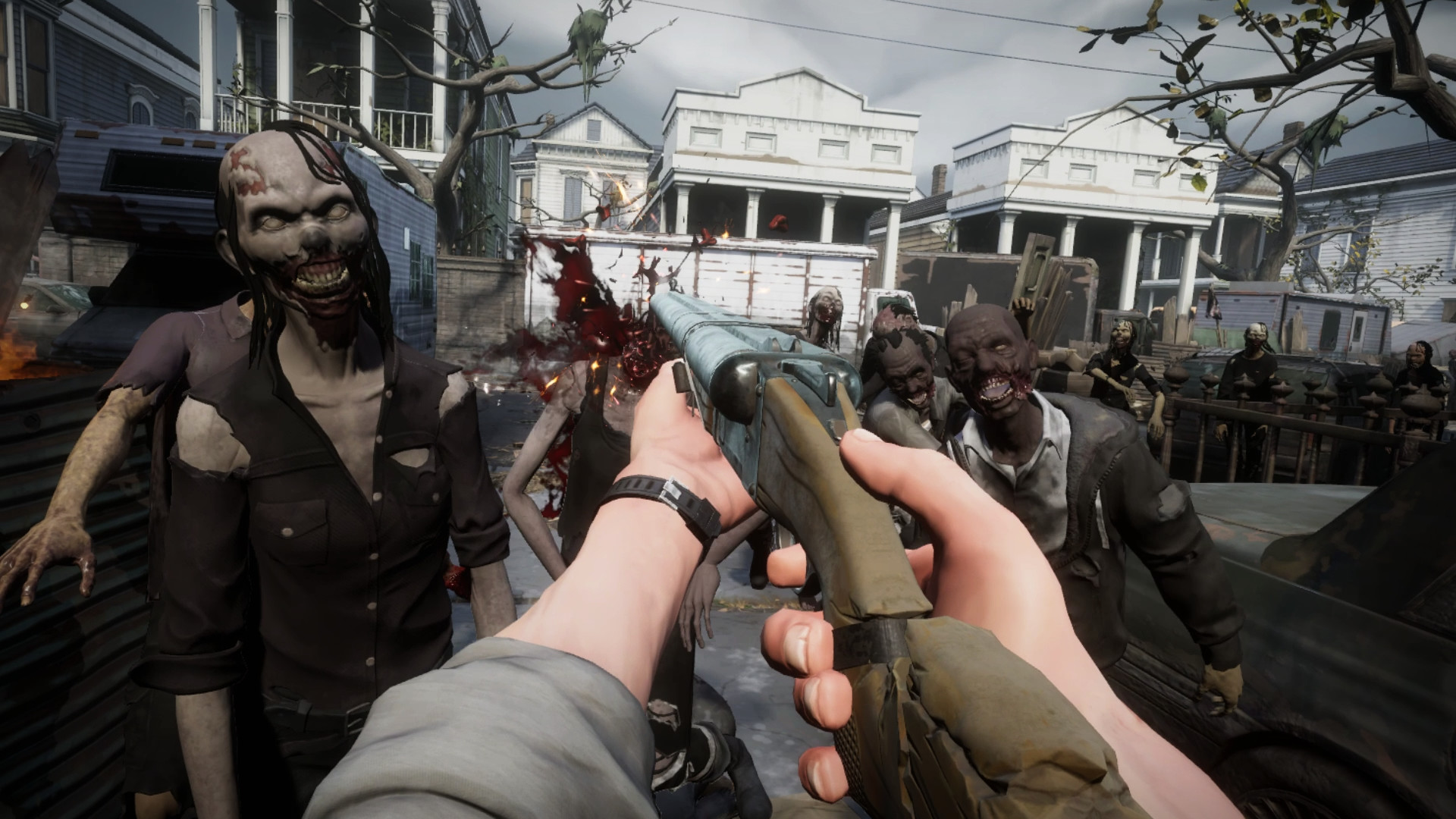 You can play the game seated or standing, as pressing the right-analogue stick in will set your height in the game, and the team have included comfort options like snap turning and blinders to try negate the motion-sickness that people can suffer from. Meaning the game can be played by many users – however, if you can play standing, we found this is the best way to play the game.

When it comes to the controls the main buttons you will be using are your grips and triggers, with the only other buttons being used are the Y button to engage in conversations with NPC’s and B to crouch, making sure its all kept simple and works well with what the game offers.

Overall Saints & Sinners has a huge playtime of around twelve-hours for the campaign mode, but even more if you are a completionist – which could increase it to around sixteen-hours. Then with The Trial mode coming further down the line to the Quest version, it’s going to add more playtime for people, as you try to survive as longs as you can against the hordes of walkers. Overall giving you an experience you would expect for the £29.99 price tag.

The Walking Dead: Saints & Sinners, has ported across to the Quest platform really well, to the point it has us questioning how is this even possible on the stand-alone device. The game brings together The Walking Dead universe and the staples of the survival game genre together perfectly, with some of the most satisfying and visceral combat we have experienced in VR – with our only gripe being the saving system. The game is something you really need to experience if you have the Quest 2. Even if you are not a fan of The Walking Dead TV show, don’t miss out on this excellent game.
Buy The Walking Dead: Saints & Sinners on Quest
Shares
Share on Facebook Share on Twitter
Paul Manton October 22, 2020