As soon as Trover Saves The Universe was announced, I knew I needed to play this game. Down to it being the next release from Squanch Games and Justin Roiland – the team behind Accounting and the mind behind Rick and Morty. The wait is finally over, so what did I think of my adventure with Trover?

The game starts with your pet dogs being dogknapped and stuck into the eye-holes of the games main enemy Glorkon; who is planning to use their life essence to destroy the universe. You are then teamed up with Trover, as he comes looking for you in your house to get you to go with him. Trover is a purple eye-hold monster who is not to chuffed being teamed with a Chairorpian and being given the job of saving the universe. The question is can you both work together to not only save the universe but your doggies too?

As a Chairorpian you are stuck in the chair, and this is where Trover and the gameplay comes into the game. You are going to be controlling Trover from the comfort of your chair and then using points in the map to teleport to Trover in order to move forwards yourself. These parts for your movement stand out with beams of light, so you can never lose them, but Trover can only go so far away from you – meaning you have to be staggered in your progression.

The gameplay with Trover is like an action platformer, with your fighting Glorkon clones and the worlds being built up by plaforms to scale. Trover will learn more moves as your go through the levels as characters around the worlds with give you eye-baby upgrades, that Trover places in his eye-holes. As well as the combat upgrades your chair will also receive a number of upgrades through the game, which will allow to move up and down to get a better view of the world, pick itemes up and throw items. With these chair upgrades it brings the final element to the gameplay of puzzles, all that need resolving to move forward in the game.

When it comes to the combat you have a number of different types of Glorkon clones, with some of them needing a set approach to beat – like dodging or you throwing items at them. As well as these most of the worlds have their own species that are pretty feral and not happy that your on their planet. This mix means the combat is kept fresh throughout the game, as you learn more moves and meet more enemy types.

That is one thing they have done right with Trover Saves The Unvirese, they have managed to get the correct mix of platforming, the combat and puzzles. This makes the game and each world feel fresh throughout your full play-through.

Given the game is made by the brain of Justin Roiland, as you would expect the presentation is just as crazy as the characters and story. There was only really going to be one way to approach the visuals, bright, colourful, cartoony and of course a touch of odd-ball character designs – we are happy to report that this is exactly what Trover Saves The Universe brings. With each world you visit being different in visuals design and it’s own theme (our favourite being Fleshworld), the whole game stays feeling unique and you feel just as immersed in this game as you did Astro Bot: Rescue Mission… but just expect it to have a lot darker tones. 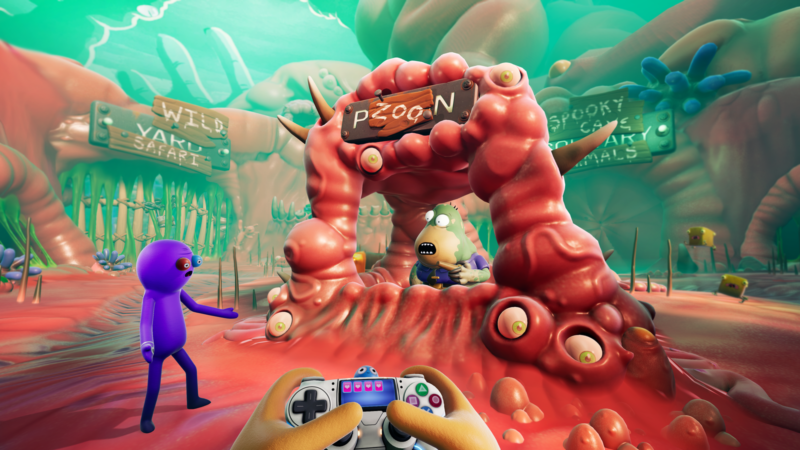 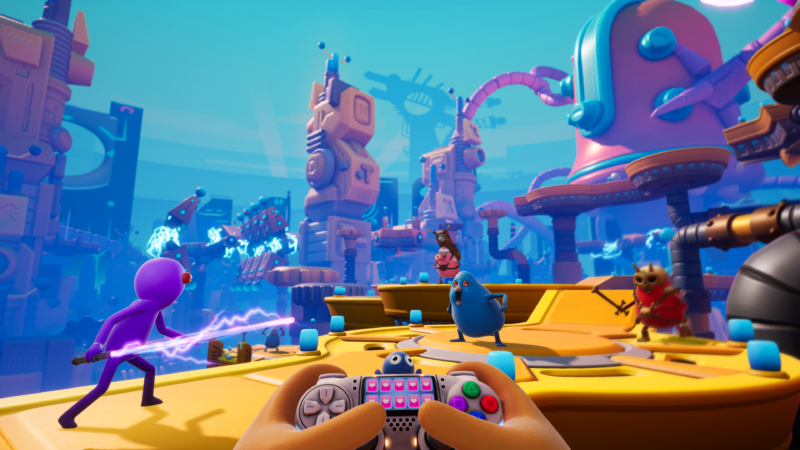 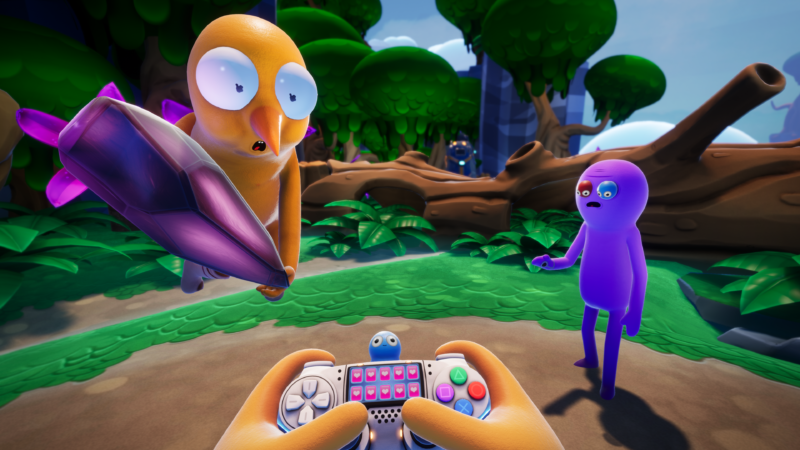 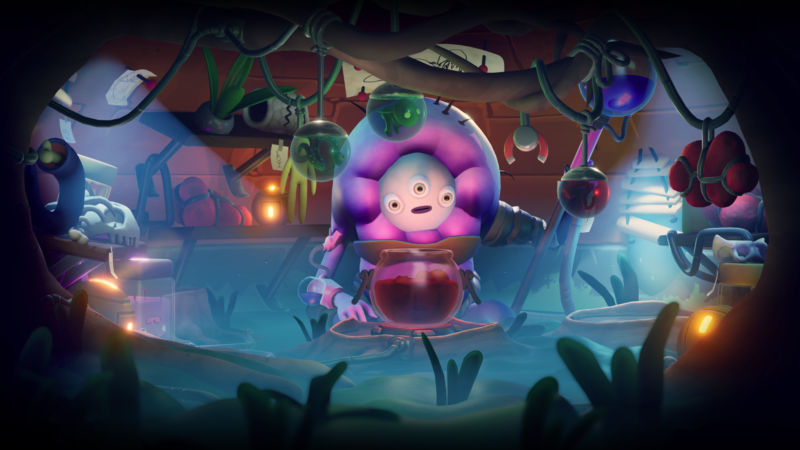 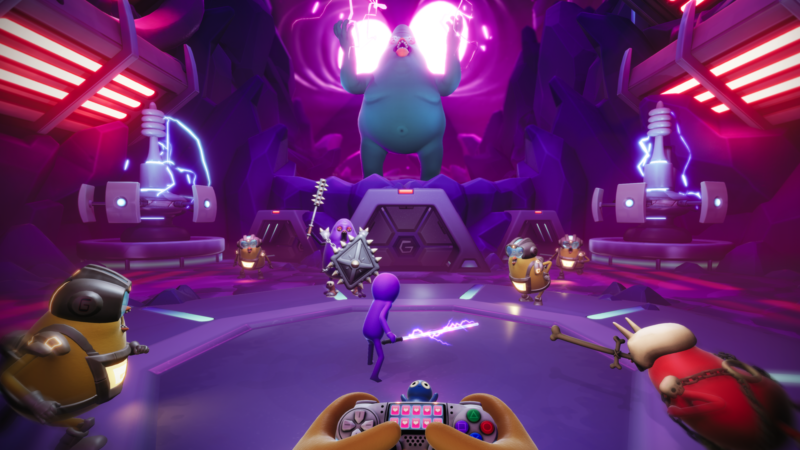 As with the visuals there are set things you expect when if comes to audio when Justin Roiland is involved and that is voices similar to those in Rick and Morty and crazy and dark humour. We seen this in Accounting and we see it again in this game – although this is not a bad thing at all. One thing the game does will is gives each of the characters you meet their own personalities through the awesome voice acting, and the delivery of the lines. In turn making all the unique and zany characters you meet in the worlds different. One last thing that really impressed with the audio is the amount of lines in the game. Even the generic filler lines were not repeated that often throughout the full game, I only really heard repeated lines a couple of times.

Also the team give you an option to use uncensored or censored audio, making it accessible to people with different tolerance for swearing.

The game is made to be played seated… at the end of the day you are a Chairorpian. Given the games combat, platform and puzzle elements you will be using the DualShock 4 to play the game, with it being mapped as you would expect for a platformer when it comes to the main gameplay elements. The only other real uses outside of your standard gameplay elements is you will use one analogue to turn your chair and the other to move Trover. The final buttons are you triggers to grab and the bumper buttons to move up and down in your chair.

I know some people might think using a DualShock breaks some immersion, but the team have made you have a controller in your characters hands. This allows for the immersion not be broken and is a really nice touch in my opinion.

If you are just looking to get through the levels and the story and not fully exploring the worlds, when you have multiple paths, you will likely get through the game in around four to five hours. However, your given a reason to explore when you can from all the paths and heights, as around each world are hidden Green Eye-baby’s that Trover is very passionate about collecting. He says to give him something from the game by saving them… but, I’m sure there is another reason from what he says when you find them.

I played through the game keeping an eye out and collecting them when I could, and I only missed a few in some of worlds, but in most I found them all. Now, these can be hidden for you collect by picking them up using your chairs power or in crystal orbs for Trover to get to and break. If you are going to be completionist and want to find all of these Green eye-baby’s you will likely find it was last you between five to six hours.

When it comes to replay value outside of collecting the ones you missed, I would say if you are a big fan of the humour in the game, you could certainly play it again at a later date.

Trover Saves The Universe gets all the core elements of the gameplay perfect and mixes them enough to keep the game feeling fresh throughout the whole play-through. Bringing with the zany characters and dark humour you come to expect from Justin Roiland. But, with that in mind that could be your deciding factor on if you will be able to play the game. If you are fan of his brand of humour this is a must buy, if not you will struggle.