After really enjoying my time with my first look at Unplugged, I was stoked for the full release of the game – as it gave me those Guitar Hero vibes. I have now had an opportunity to get my hands on the final release of the game, but, has it left me equally impressed?

With this in mind, in order to play the songs you are given a virtual guitar, which you can reposition until you are comfortable, start playing a song and find it’s not comfortable and you can pause the game and make changes in the pause menu.

The songs are made up of four-types of notes, these are;

These are the main notes, but the game does also throw some extras in, for example if a note it flaming, hit it and will give you a bonus, but miss it and your guitar will need re-tuning, and hitting the notes will harder for some time. 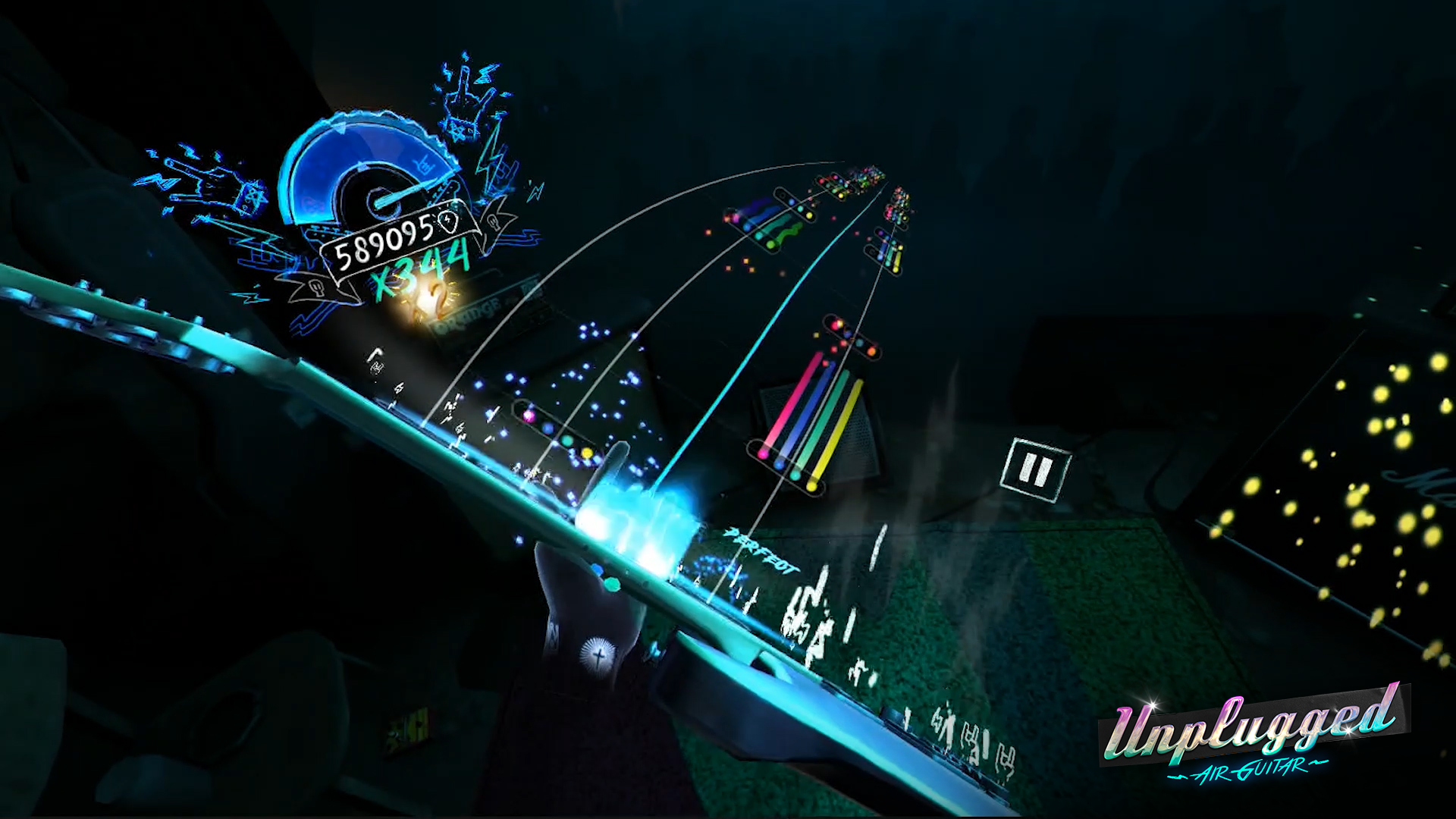 Hitting these notes will require you do the correct hand-gesture while pulling them off, these will have you removing and keeping the correct fingers on the neck of the guitar. With the gestures having you throwing the horns and the gnarly gesture – which is a great touch for a game with such a rocking soundtrack. As with Guitar Hero hitting streaks will boost a meter, let that meter empty and the song will fail and the fans will turn on you. But, hit streaks and the fans will love you and you will unlock star powers – which can be activated by touching them between strumming or hitting them with the neck of your guitar.

All of the tracks come with easy, medium and hard mode, with the only difference between the difficulties being the amount of note and gesture changes. So, I started off with easy to learn more about the mechanics and then moved up.

Now, the difficulty is where I where I found my main issue with the game, not that the difficulties increase is a bad thing, but, they have taken the decision to lock songs behind challenges. Where this issue comes in, is by the fourth venue, they are expecting you to be getting diamond records on hard difficulty as the songs complexity is also increasing. For this review I still haven’t unlocked every track, because some of the challenges are going to be too difficult for people to get through them without hours and hours practice on that difficulty alone.

Where I don’t think the challenges are a bad part of the game, l feel putting the progression of unlocking songs behind them was not the best use. These could have been used to unlock things like new guitars or guitar skins, rather than stunt the player progression.

Visually the game does what it can to give you that rock star journey, with each venue getting bigger and bigger with more silhouettes in the audience, and giving you that stage presence. The guitar model looks great and the notes are kept very clear with the bright colours used to represent them. Then there is some nice little touches on the hand models, with them having some tattoos, and also the fingers you have on the neck of the guitar also lighting up in line with the colour linked to that finger on the notes. This gives you a visual representation on what fingers are active, and helps with determining the right gesture is being held for the upcoming notes. 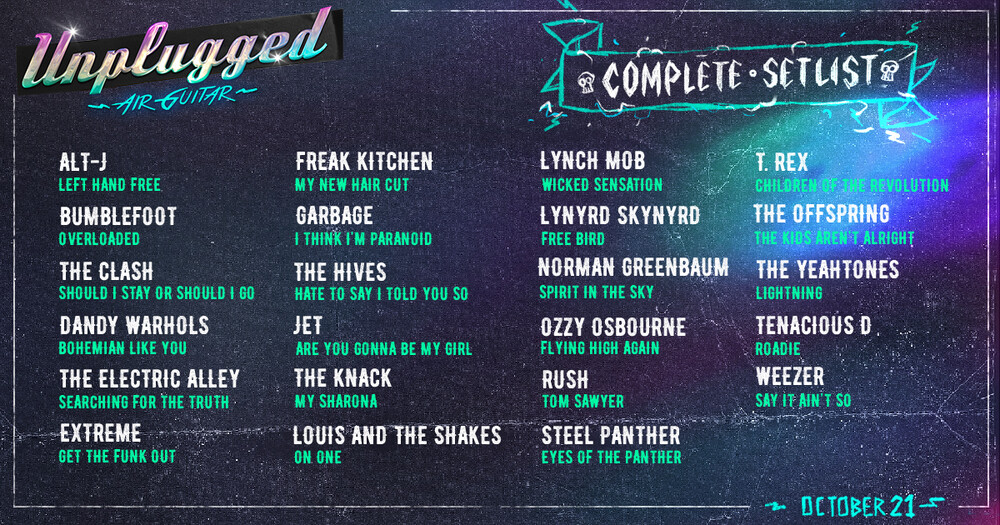 Of course with a game like this, the team needed to make sure they have licenced tracks that suits the game, and also covers different styles in these genres. I am happy to say they have managed this with the twenty-three tracks included at launch, mixing old and new bands a like. Add to this the crowd interaction and noise, and it really brings that rock star feeling.

The final nice little touch being the inclusion of Satchel from Steel Panther being your teacher – be it from within a poster. With his humour and rock and roll attitude taking you through the tutorial and praising you for great performances.

As aforementioned, the game is played not using any controllers, but using the Quest’s hand-tracking capabilities. When going in for my first look, I was concerned with this, as my experience with the hand-tracking on the Quest being very mixed. This concern was, as anyone who has played Guitar Hero will know hitting those notes with timing is essential, and any loss of tracking could really effect not only the experience playing the game, but, your scoring as well.

Thankfully, any of my concerns on the implementation of the hand-tracking were eradicated during my first look. This really showed how well the team had this working, all while being given those lessons for Satchel from Steel Panther.

The positioning of the guitar is going to be essential, this is done by holding the neck of the guitar and the whammy bar and moving it around. I personally found my most comfortable position was playing it seated. The reason for this I found when playing the songs standing I moved physically to much – as the guitar position will not follow you if you take any steps.

As previously mentioned, over my time playing to review game, which has been many hours I still have not unlocked all the tracks. But, as a fan of the game, I want to keep continuing and get all the tracks unlocked – as will others. But, some players might get sick of playing songs over and over again to try and move on to the next venue and set of tracks – for these players unfortunately the game could become stale quickly.

Unplugged really brings back the memories of the time spent in my teens playing Guitar Hero, and this is not a bad thing – it really does hit all the correct spots for me. With the best use and implementation of hand-tracking I have seen to date, and the overall gameplay experience leaving me massively impressed. With a good selection of bands and licenced tracks over the twenty-three songs available at launch, it will keep players of all generations happy. But, perseverance is certainly going to be key for unlocking all the songs with quick difficulty spike in the challenges, and this is something that some might have and some might not. Either way it is worth getting that air-guitar out of the retirement, and giving Unplugged the opportunity to make you feel like a rock star.
Buy Unplugged
Paul Manton October 21, 2021