As soon as I saw the Kickstarter for VR Ears a peripheral looking to bring Index quality audio to other Head Mounted Displays (HMD) I backed them straight away. At that time the Index was my daily driver and one thing it had over all the rest was that sweet, sweet audio. The product has now arrived, so I have been putting them through their paces on as many HMD’s as I could or put simply the ones I own. The question is, do they bring the audio I desire?

The ease of set-up really depends on what HMD you are going to using it on, with all of them apart from the Vive Pro Eye being very simple, with the Vive taking some work. For the Quest, Rift S and PSVR it was just swapping out the pads inside of the clamps, loosening them and then tightening them to the strap. Once these are on you loosen the screw on the clip and attach them to clamp, get the angles correct so they are over your ears, un-clip it from the clamp and tighten the screw to keep them in that position. Slip them back into the clamp and there you go.

If you are going to using them on Vive Pro you are going to need to remove the current speakers and then place in the caps to block those holes. Next up is removing the cable tidy rubber from around the left side of the strap. Once these are removed, complete the steps above for the other HMD’s.

I expected with the product coming from Rebuff Reality, who have experience in making other VR peripherals, it would be a good build quality. I was not let down in this area, with all the plastic used being of high quality and seems strong. The cable attaching the two earphones together is thick and strong, and wont be easy to dislodge. It’s all well held together and over all feels like a quality build. Over the time testing on the HMD’s the battery lasted around five to six hours before needing to be charged, so they come with a decent battery life, and take around two-hours to charge in full.

Before we go into how they fared, I did not try them with my Index, as I thought the time and effort to swap them out, when they are trying to bring the same experience was pretty much pointless. Also I was unable to test them with the Pimax 5KXR, as I only have the fabric strap for that and the is nothing solid to try and clamp them to.

My first initial reason for backing the product on Kickstarter was to being much improved audio to the Quest, as aforementioned at the time the Index was my daily driver – so the main use case was for the Quest. With this in mind I decided to start the test on this device, and wanted to test them across a range of different styles of games.

With them being for audio purposes I decided to start with Ragnarock, a rhythm game I love, and the prefect use case for testing audio. I then played some of I Expect You To Die an old game but still a favourite, with dialogue playing a big part in the game. Then I couldn’t help but finish off with one of favourite VR title Moss, bringing with it great storytelling, cute noises and great use of environmental sounds.

Starting with the Quest gave me the feeling on how well these were going to improve the audio on the other devices. I found the music was clear and also able to go loud with out distortion of any sort, and the dialogue that is one of the charms of both I Expect You To Die and Moss being really clear. It really showcased what the product was going to be capable of.

Although I expected it to be similar to the Quest, as both of the HMD’s use the same strap audio, I still wanted to put the Rift S through its paces with the VR Ears. This was for two reasons, one the additional quality of PCVR, and secondly I have not connected it up for ages.

For this part of the testing, I went with Vader Immortal, although I am not a fan of Star Wars, this has some iconic sounds everyone knows. Followed by The Lost Bear, a side scrolling platformer with a theatre environment that uses 3D audio really well, and then some shooting action in Medal of Honor.

As previously mentioned the Rift S uses the similar strap audio of the Quest, but I still needed to do some testing on the PC side. The audio clarity added to the visuals in both Star Wars and Medal of Honor, with audio clarity I have not seen achieved on the Rift S really taking these games to another level. Then the biggest test of the 3D audio capabilities in The Lost Bear also passed with flying colours.

I was really interested to see how they would go with the PlayStation VR, as even the official PlayStation headphones for the PS4, really don’t give a better performance than the basic ones supplied with the HMD. The first thing I seemed to notice was when connecting them to the PSVR, when in menus and not in the games, they had a little fuzzy humming noise – and I was really happy this did not continue to in-game.

While testing them out, I chose to try Synth Riders as it is my favourite VR rhythm game, and one I have available on all platforms. For the testing I jumped into the new Muse track pack, as it is one of my favourite bands and one that really suits great audio quality, meaning it was no-brainer. Next up was the Astro Bot: Rescue Mission, something a little different with a platformer made up of very happy upbeat music and kid like charm. For the final test I went into Blood & Truth, but this was not into a level full of shooting action, but instead the mission in the art gallery. I chose this one, because what you are seeing is really made up by the audio that goes with it. The mix of music, things breaking and smashing really sounded great in the headphones provided with the PSVR.

Over my testing with the PlayStation VR, I found this was the first time a pair of headphones has provided an on par if not better experience than the default ones received with the HMD. However, when on the PlayStation menu or in the game with low or no menu sound, it does give off that fuzzy humming noise, but not often you have to put up with this. 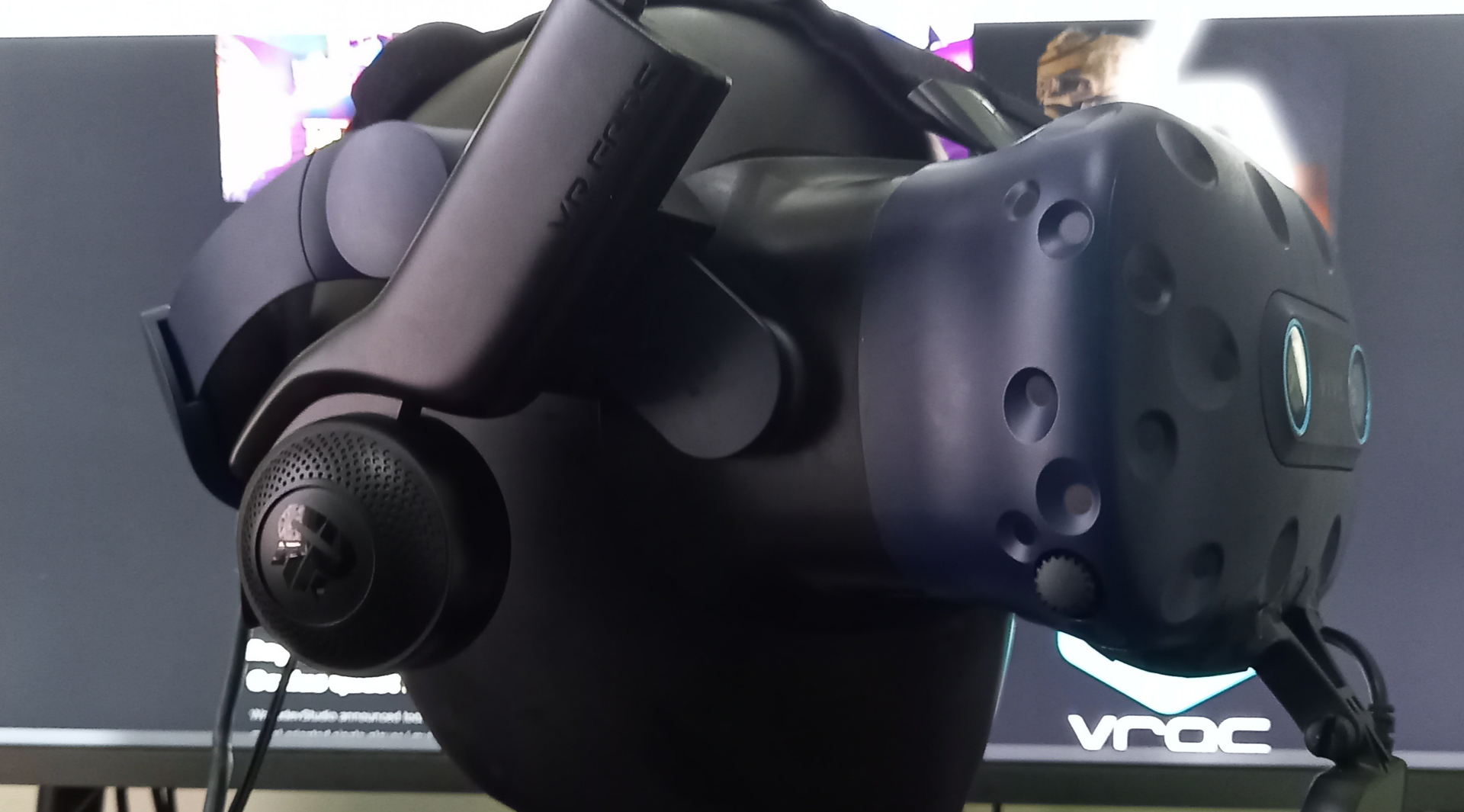 I thought I would leave my new daily driver to last, at the time of backing the VR Ears I did not have the Vive Pro Eye, but over the time to them being delivered this became my go to HMD – and to be honest I was excited to have Index style audio on my daily driver again.

This is where I hit one glaring problem, as unlike all the others in the list, the Vive Pro Eye does not have a 3.5mm audio jack to plug them into. In order to get them working as per the instructions, you need to have a USB-C to 3.5mm jack adaptor. Where this might not be an issue for some, for others (like me) it might be, as that may already be in use – in my case for the Vive Facial Tracker. In order to negate this issue, I used a Turtle Beach USB to 3.5mm jack extension cable I already had and ran this from the PC directly.

For testing the Vive, I decided to go into Against, although this was again another rhythm based game, its a bit more gritty, and I wanted to test if the use of the adapter caused any issues. I then moved on to my favourite social VR application Neos VR, and although Solojourner Island was made for bHaptics, as they offer a number of different tactile options they also have to match the audio to them, so it gave me chance to check out the different sounds and also the clarity of other users speaking. With the final test coming in the form of Half-Life: Alyx, to get in some more action with a more modern weapon – for this test I decided to use the Gunman: Contracts mod as well, as its non-stop shooting and has near constant dialogue.

With my testing for what is now my daily driver for VR, it really made me notice how much I have been missing that Index style audio on PCVR. From the nice and chunky gun shots in Half-life, the gritty music in Against and the very clear social VR aspect in Neos, these are an essential upgrade to the Vive HMD’s – and where mine will be staying (until the universal head strap arrives at least).

For the purposes of transparency, this review was created using a product I backed on Kickstarter. The use of a purchased product does not affect my judgement of the product.

VR Ears main attraction was getting that Index style audio but on other HMD’s, and the product does a fantastic job doing that, with very close to full Index clarity. One thing that comes as a massive benefit is the off-ear comfort the product provides, while supplying a better audio solution. Now, where the assembly is easy in the most cases, Vive products do take some de-assembly to get them attached. Also, if you want to use them across multiple HMD’s, you really do want the universal headband they offer at an extra cost, as switching them between different headsets isn’t simple – the reason being, different HMD’s are going to need them on different angles. Even with that in mind if you want the best audio for your non-Index headsets, you should not hesitate getting VR Ears.
Buy VR Ears
Paul Manton October 7, 2021