Carbon Studio have continued the trend of bring their games over to the Meta Quest with Warhammer Age of Sigmar: Tempestfall. One thing the studio have continued to do very well with their previous ports is make good use of the hardware limitations, the question is…. Have they done it again?

Set in the Age of Sigmar universe, the game sees you investigating a new threat in the Mortal Realms of Shyish, following a devastating event known as the Necroquake. This event has caused the Nighthaunt forces to rise up, and its been left to Sigmar’s Stormcast Eternals to try and remove these evil forces. Taking the role of Lord-Arcanum Castor Stormscryer, you have to ask yourself can you lead this team and complete this dangerous task?

The main gameplay loop is based around a fantastically built VR combat system, which takes the form of both melee combat and spell-casting. The game gives you three melee weapons, a sword, a long and short staff. These can be used as general weapons, but are also where the spells come into play – all the stormcasting spells are done by the weapons. Meaning you can mix your melee attacks and spells easily to become the ultimate foe for the Nighthaunt.

Outside of your attacks, the game also brings in a block and parry system, which you will need to get used to the further you get into the game. This system is handled very similar to how it was done in Until You Fall, with an indicator coming up one the screen to where the attack is coming from, and you need to time getting your weapon in that position – this is where the dual-weapon combo becomes very important.

In order to get this all running smoothly they have had to reduce the amount of enemies you take on at once, but even with this reduction there is still times where you can be overwhelmed with the amount you are taking on at a time. 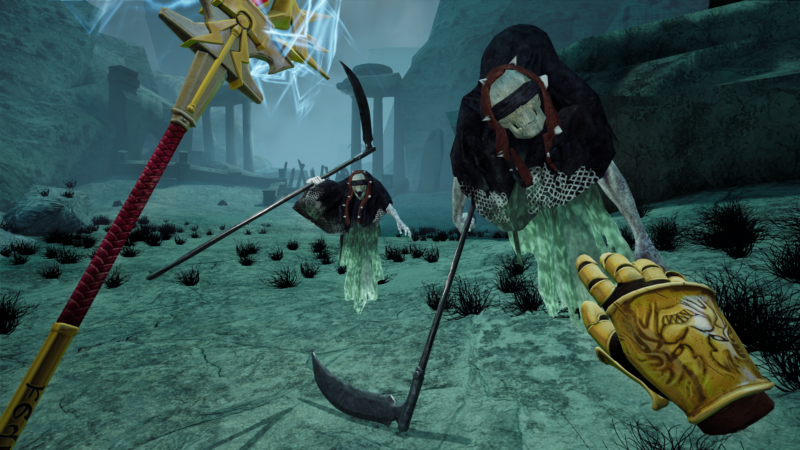 Apart from the combat systems for the weapons, you will also get a grenade that will stun the enemies, when getting over-run (but this will harm you if it hits you), and can also fire small storm bolts from your gloves.

Carbon Studio’s have also mixed in some small puzzle elements, but these are never overly difficult to figure out – but with what Tempestfall is doing as a game, these do not need to be overly complex. These will see you moving blocks to clear another path, breaking through walls or exploring to find different ways around or ways to levers and chains to open doors.

The final part of the gamplay is the upgrading of your weapons and spells. This is done with finding pieces of Sigmarite and ancient scrolls, then using these to upgrade you weapon and spells at the camp. The materials are littered around the world, in hidden areas and also rewarded in Quests that are placed around the world – which play out like dungeons.

With the gameplay porting over perfectly as expected, what have the team done to make it run smoothly on the standalone HMD? I don’t think you will be surprised to see quite a big difference in the visuals, as this game looked stunning on PC. But, they have continued to use their understanding of porting to make sure it still looks nice and immerses you enough with the look of the game. The fine detailing in everything is missing and the lighting has been reduced, but this not distract you from feeling like you are in the Warhammer universe.

They continue to bring the Universe to life, with a strong use of audio. Mixing great sound effects from the combat and spell-casting, the moans from the Nighthaunts and environmental sounds to keep you immersed. However, I did find the 3D audio when it battles was sometimes incorrect, and at times I thought enemies were behind me, but turning in that direction there was nothing, where this can be distracting at times, it doesn’t ruin the overall experience. 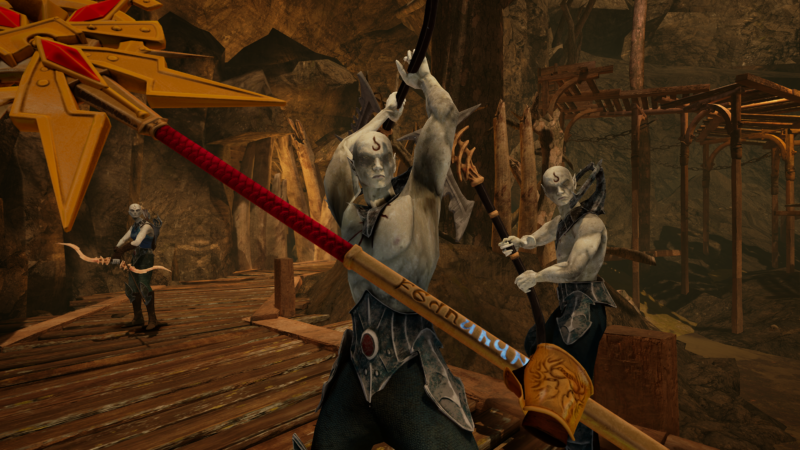 As the game is coming from an experienced VR studio, the game offers plenty of comfort options, making it accessible to anyone never mind the strength of their VR legs.

When it comes to the controls, they have created a system that is perfect for VR, but does have some slight issues. The overall control system of gripping the controller to spawn your weapons in your hand and grabbing items in the world works great, as does mixing it with the trigger being pressed to cast the spells, the issue came with the switching of weapons.

To do this you have to hold a button on the controller on the hand you want to switch the weapon on, this will open a weapon wheel for you select the weapon or item by moving your hand to it. Where this has had quality of life updates since the release on the PC, it is still quite easy to select the wrong one, especially if wanting to switch in battle, as this does not stop the enemies attacking – which can lead to annoying deaths.

Overall the game took around seven-hours to get through, and I missed some of the Quests placed around the world, and never managed to fully upgrade any of my weapons in this time. Now, the question I had to ask myself was, would I play this again to find those Quests and get every weapon upgraded… the answer is unfortunately not. But, with the seven-hour campaign I was really pleased with what the game offered, and believe this a solid length for the game.

The team at Carbon Studios have done it again, and ported another of their title to the Quest successfully, bringing the Warhammer game that finally left me satisfied at the end to the platfrom. With a combat system that allows the mix of melee and spells and works great in VR, giving you the feeling of being of bad-ass in the Warhammer world. Even with the downgraded visuals and the enemy amounts needing to be reduced to allow for a smooth experience on the standalone device, I was still entertained from start to finish. If you are looking for a game that will leave you fulfilled and the true feeling you have experienced the Warhammer universe on the Meta Quest, this should be the title you choose.
Buy Warhammer Age of Sigmar: Tempestfall
Paul Manton May 19, 2022