I really enjoyed Windlands when playing it a few months after the release of the PlayStation VR. Now Windlands 2 has finally swung onto the platform, so I have donned my Guardian shoes again, and took to the trees in the next instalment. So, what did I think of the PSVR version?

One thing that sort of took a back seat in the original was the story in the game, but this time they have brought a fully fledged story to the sequel. In the story you are again placed into the role of a guardian, as you return to the ruins with your hooks and this time a trusty bow. The world is now under threat of the blood guardian being resurrected, the question is can you stops this?

The core mechanic of the gameplay carries over from the original, with you needing to traverse the ruins with your hooks, swinging from the greenery placed around the levels. The reason this is important is because most of the level is missing a floor, so this is the main way you are going to be getting around the Windlands. At points in the game you are also going to need to rely on your parkour skills, as you jump from platform to platform – and I would recommend practice when you can. The reason I recommend this is the low gravity on your jumps can be tricky to when landing.

They have then added the new addition to Windlands 2 in enemies. With the game including two standard enemies types that appear in objectives and also later in game just around points when traversing. Then you will have to take on huge titan bosses and these can become quite intense, as you have to hit weak points – which are sometimes big and sometimes smaller and more hidden. You have to aim for these while trying to avoid their incoming fire or sometimes take on the additional standard enemies between boss damage rounds. 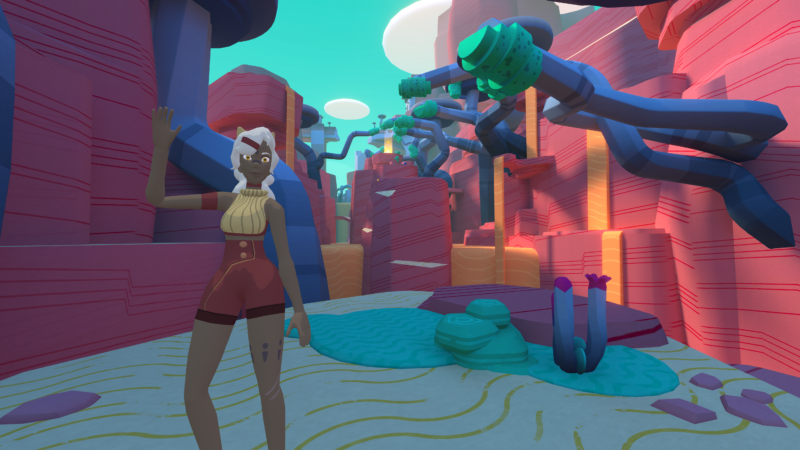 One of the things I loved most about the boss fights, is they all take place in very different areas, all that make a unique approach on taking them on. This gives each battle that feeling of being different, although the goal is ultimately the same take out the targeted weak spots.

The way you are going to take on these enemies and bosses is with the aforementioned bow, and this is responsive and accurate, but faces some issues which I will discuss later. With the bow you are going to need to judge the trajectory of the shot for enemies in the distance or that might be flying around the area.

However, the biggest addition to the sequel is the four player co-op for the campaign. This really is the best way to play the game, having fun with friends while swinging through the Windlands and working together to take down those bosses. But, do not worry if you want to take it on as a lone Guardian you can, so you can play the game the way you like.

When it comes the to presentation style, it has kept the similar cartoon style cell-shaded look, but everything is so much more refined. With the inclusion of NPC’s appearing around the world in the campaign, you really do get a lot more visual stimulation just from that one thing alone. The environments seem a lot more populated with the increased amount of greenery, that has been so instrumental in giving you that badass feeling while traversing through the levels.

With the game bringing a fully fledged story and NPC’s it was important the audio was done correctly. I am happy to say all the voice acting is strongly done and you can see the team have really made sure they got the correct voice to match the characters design. Some of the NPC lines as you walk around had me cracking up – because of the perfect delivery of the lines. They then add to this sounds of the enemies, your hooks, your bow and the environmental sounds, and it makes sure you are kept immersed in the universe the team at Psytec Games have so lovingly put together over the game’s development. 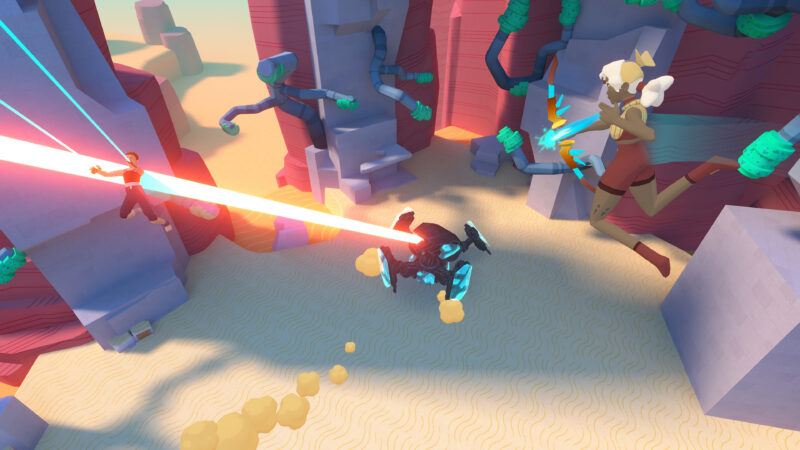 One thing you need to take into account with Windlands 2 is there games locomotion could be quite intense for some players. The team have tried to negate this by including every possible comfort option and allowing for seated or standing play – however, I found I played mostly seated.

The reason for this, was because of the older hardware for the PlayStation VR making tracking a big issue – which is where my issues with the bow came in. Of course this is outside of Psytec Games control and they have done the best they could with the Move Controllers. I found there was quite a bit a drift and lose of tracking when using the bow, and at times found I would physically turn if I missed a swing – resulting in loss of tracking and a good number of unnecessary deaths. Outside of this the buttons have been mapped to use the Move Controllers well, but again getting the quick turns in with not being able to turn physically can be a pain at times.

Now, I am not sure if this is because I have played through the game multiple times on PCVR with full room tracking on Steam VR and analogues on the controllers. Maybe people who get their VR fix solely from PSVR, might not face this issue – as these sort of controls and tracking are second nature to them.

The campaign takes around six-hours, and that was just going from objective to objective, without exploring the full areas. But, there is much more included to make completionists want to return, in each of the three areas in the game you can find 20 hidden plates to collect, like the ones hidden in first instalment. They also have other challenges, speed mode and many Easter eggs hidden in the game.

Windlands 2 has taken the excellent locomotion systems and challenges that were in the first instalment, and added extra to take it to that next level. Bringing in combat, intense boss battles and fully fledge story and campaign – which can also be played in co-op. However, the older hardware brings with it the frustrations of unnecessary deaths, mainly down the issues faced with the front on tracking being required, with Windlands 2 being the sort of game which you will want to and will find yourself rotaing physically. But, even with these frustrations, I would recommend the game, and if you can playing it with friends – as the game really excels in co-op.
Paul Manton November 26, 2021