For many years Dirt Rally has held the crown for the rally simulator for fans of the sport. However over the last few instalments WRC has been closing the gap between the franchises. The question is can Kylotonn close the close the gap even further with their new entry?

When it comes to racing simulators, nothing brings more thrills and excitement more than the rally genre. With the races bringing different terrains, narrowing tracks and a huge variety in turns – all made that more intense with the chance of hitting trees or even going off the edge of mountain. It makes sure you are monitoring your speed at the correct times, to allow the best run and setting the best time as possible.

As you would expect the racing is where the games main attraction will come from, and the game is going to throw you straight in with little explanation. As soon as you get into the game, you are there in a rally car without your co-driver to announce what is coming up in the track. However, don’t let this put you off, where it is a tricky start this is to evaluate your ability, and the game does a solid of job of taking this to recommend your starting difficulty level and driver assists on this performance.

A big improvement in WRC 8 is the handling of the car, with it being more realistic than ever for the racing series. Given this is a simulator this goes a great way towards hitting the expectations that racing sim fans set, but, taking this into account the game is going be difficult. Which may leave some players frustrated as this means a little mistake like an early turn could be very unforgiving on your performance – although it does give the games awesome physics system chance to show.

This latest instalment has seen a revamped career mode, which seems to have taken some pointers of Codemasters F1 series – which certainly is not in any way negative. This is where players a likely to spend the majority of their time, as they start out with the game.

In career mode you will be taking your driver through the rally championships, as you advance from the junior racing series to the full WRC – well if you perform well enough. However, it’s not only your performance you have to worry about, as you will also have to manage your whole team. This will see you having to decide if improving your car or investing in your team is most important, and can lead to some difficult choices and decisions during your championship push. There is so many options on the skill tree, it’s sometimes hard to decide which is going to benefit you the most in the long run.

The final element of the mode is managing your own staff roster, which can in turn affect your own performance on the track. For example you might think of saving money by having a smaller team of mechanics working for you, but, exhaustion can kick in. Meaning you will have to make sure you have the staff you need to perform – but also that you have the money coming in to pay them. Adding this little touch really gives you a larger involvement, and in whole gives you a large sense of achievement when everything is going right, and then in disappointment as it all goes wrong.

Outside of the massively improved career mode, you are going to get the standard modes you come to expect in racing games. There is your quick race mode, free drive and weekly challenges to offer more for those who want to keep going back to set new times and enter leaderboards. However, the multiplayer is where the games main push is once you are done with the career mode. You will have several modes to play online, and it’s great to see the team bringing a local multiplayer mode. Meaning you can race against your friends locally and see the anguish on their face when something goes wrong.

But, one thing that is clear instantly just looking through the quick race option is there is a load of content from the officially licensed tracks and cars in the game. Then they add to this all the customisation and options around the conditions you are racing in. Meaning for those invested in WRC and have a general interest in rally, this is going to fulfil all your needs. 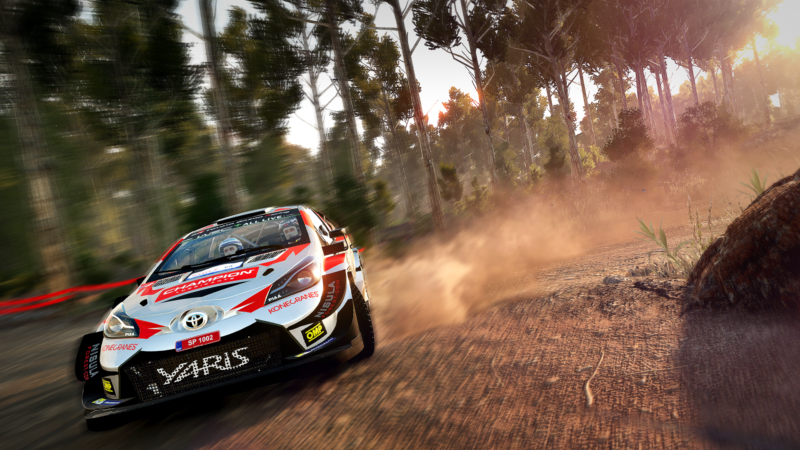 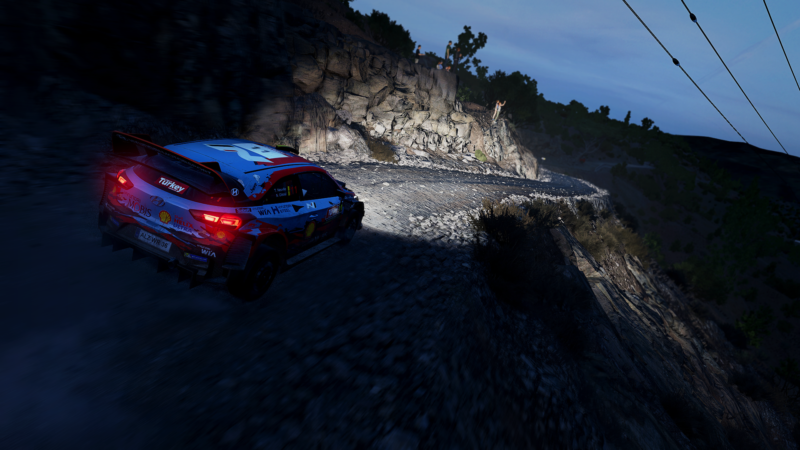 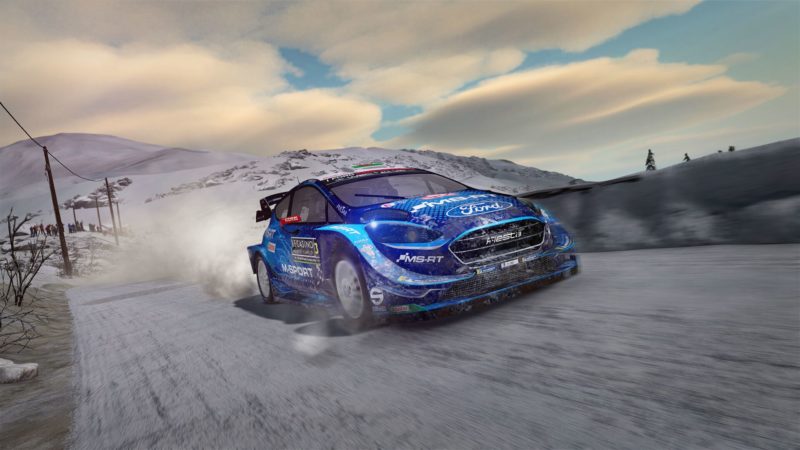 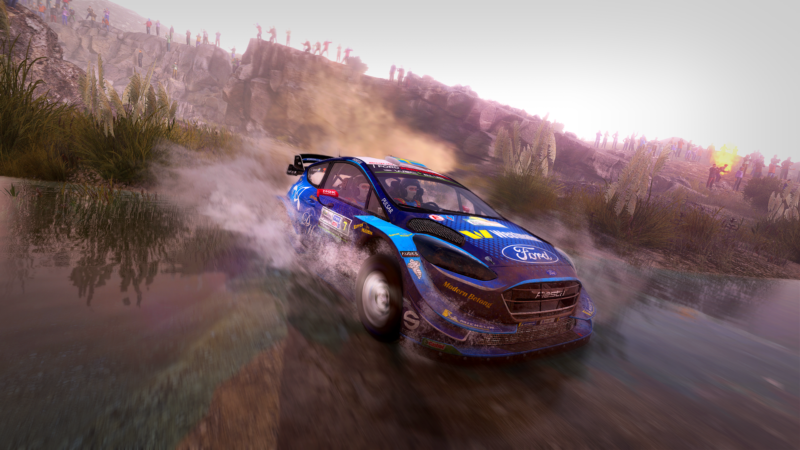 As soon as you get into the races, you will notice how nice the game looks and the improvement the team has made to not only bring the more realistic handling to the cars but to bring the environments to life. Never mind what camera angle you use from the cockpit to the full car view, you will be taken in by the stunning looks of each location.

The environments are brought to life more by the impressive dynamic weather system that has been introduced in the game. This allows for the not only the tracks to be torn up as they are battered by rain or become a lot more slippy as snow starts to fall, but also means, your handling of corners and turns need amending as the weather takes it toll on your race. The last little touch brought to life by the dynamic weather system is the lighting which is used excellently in the game. Meaning as the clouds clear or build the lighting on the track may change, and elements like god-rays coming through the trees or over the top of the hills could blind you a little.

As well as the weather system the lighting in the game can be altered by what time of the day your race is happening in. With the piercing light from your headlights really making for a great effect in the night races, adding this to the storm makes for some really difficult racing.

When it comes to the audio personally if it’s an option I would recommend playing this with headphones on. The reason for this is where the sound is great from the cars, the instructions being clear from your co-driver, and the gravel hitting your cars bodywork, it all adds up for immersive use of sound. Now, the reason for the headphones it all sounds so much more clear and immersive coming through them directly into your ears.

With this being a simulation game, many players will want to play the game using a wheel and of course this is the best and most immersive way to play the game. However, where some racers especially simulators do not transfer well to game pads, I was shocked at how well WRC 8 has. Meaning this will be open to those who are not fans of playing with the wheel, but want an excellent rally experience.

When it comes to longevity it really hard to put a time frame on the game, as this really is going to be dependant on your love for rally, racing simulators and if you can handle the difficulty and learning curve. If you can you will find reasons to return be it trying to improve you performance in career mode, the single races and challenges and racing others online. If you do take the game and the realistic simulator elements I can see you wanting to return to the game for the reward of getting better.

The VR side of this review comes through using vorpX, as the game does not offer native support for VR. At the time of writing this review, we have only managed to get WRC 8 working in z-Adaptive within vorpX. Meaning you are not going to have the full geometry 3D experience like you do with native VR games, including Dirt Rally.

What this means is where you can get the feeling you are sat in the cars with a little 3D-depth for the environment – you just won’t get the full 3D immersion of the cockpit. But, as the developers have announced they are not looking into VR support, this is the closest you will get to being able to play the game in VR. Hopefully, in the future we might see a full geometry profile appear on vorpX via the cloud profile system (as WRC 7 did). With this in mind, if you are thinking of getting the game to soley play it vorpX, at this moment in time you might want to hold off.

* Please note vorpX is not directly supported by Kylotonn, and is a separate third-party program you must buy.

The team at Kylotonn took the decision to take a year out on releasing the next instalment of the WRC series, and it’s a decision that has certainly worked in the games favour. Allowing them to bring much more detailed and expansive career mode and a fantastic dynamic weather system. The game brings some fantastic simulation, which then goes hand in hand with the challenging be rewarding learning curve. However, these elements mean it might deter more casual racing sim players and could take players new to rally a while to pick up. But, with the sheer amount of content and all the officially licensed tracks and cars from junior to fully fledged WRC, it is an essential for rally fans, and again sees the series close the gap on its main competitor Dirt Rally.

Also available on PlayStation 4 and Xbox One
VR Support via vorpX
Developer: Kylotonn
Buy on the Epic Store