One thing I used to love before VR was simulator games, with the likes to Theme Park and Theme Hospital getting a lot playtime in my early teens, before getting into the Sim City games. This is something I have been waiting to come to Virtual Reality, and now we have the first of two games in this genre in Cities: VR. I have now been creating my own virtual city, but did it light the spark I was hoping?

As you start your City, you start with the roads coming from the motorway, then need to start off your road and planning the layout for your city. This then brings in the core mechanics form Cities: Skyline, with needing create your cities infrastructure which includes; utilities, city zoning, sewage systems and power-lines. As the population and city grows, you need to keep an eye on the coverage of the utilities, and start adding the new buildings and features you unlock like medical, education and parks – this in turn keeps your residents happy.

You can turn the controller to see what zoning you need to increase in the city, from residential, shopping and industry. All of which helps yours city turnover stay out of the red, as you are covering the general up-keep costs. If up-keep is out of your control, you can look at taking loans or increasing costs like taxes – with the later causing a possible stir with your residents. Keeping an eye on zoning is important, as if you build too much industrial or shopping areas, you might not have enough people to do those jobs, meaning these will go out of business and get shut down.

One thing I was surprised to see was unlimited money and unlock everything being available from the start in game based on management like this. I could understand these becoming available once you have completed the maps, but it is optional if you want the full experience the games offers. 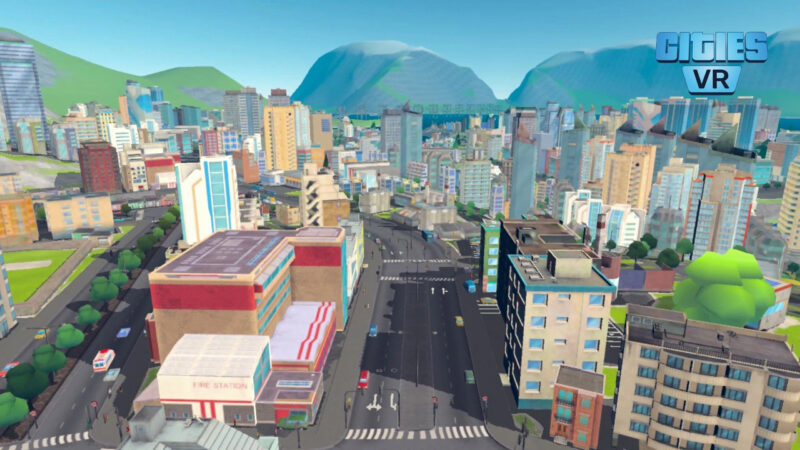 As someone who had not tried the standard version of the game, I think I need to mention the tutorial, and the issues with this. I found the tutorial seemed based more at an experienced Cities: Skyline players to teach them the VR controllers over a new comer, and this nearly put me off the game. However, I found going online and just looking up beginners tutorials and tips on Cities: Skylines really helped me out in this area – but, it would be a lot better if the in game tutorial gave you more information. Although, with this in mind once I had watched the online hints and tips, it did massively increase my enjoyment in the game.

Now, with having to watch some online tutorials and hints, it is clear with this being a port of the game for a standalone HMD, some of the games features have been stripped back from this version, but the core of what makes the game is available.

With this being a game made for the Meta Quest 2, as you would expect the game visuals compared to Cities: Skylines have been reduced significantly and the buildings look quite plain. Even with this in mind, the game really does suffer badly from pop-in when zoomed in on the action. They have then had to reduce the lighting and shadows – but to be fair, it’s not right comparing it to the flat-screen version of the game in this area. If you go into the game expecting this stripped back presentation, you can see they have done the best they can with the power on offer from the Meta Quest 2 – and the cities really do come to life in front of your eyes.

The games is really brought to life by the audio design, as the city comes to life around you so does the hustle and bustle of the city life. Going close into the world and buildings like the hospitals gives you more clear audio to suit that building. I feel this really helps the game, and a more important element that the visuals in this version of the game.

When it comes to comfort the game can be played seated or standing – but, being perfectly honest I do not see any reason to play it any other way than seated. You can then move around the map using teleport of smooth locomotion in like a God mode flying over the city. With the final options being snap turning and vignettes for those who suffer for motion sickness.

The controls is where my main issue came in with the game, the scheme is quite finicky and even after many hours in the game I still find myself pressing incorrect buttons and needing to concentrate to make sure I am selecting the correct items and settings. The next issue I had is I find so easy to pause time by accident, as this is done pressing in the analogue stick, and at times I was wondering why some icons weren’t going like rubbish being collected or the new residents taking the jobs on offer.

It’s really shame as this control system can take away from the experience a little, but you can see this was the best possible method due to the amount on offer in the game. But, I am sure once you have put many many hours into the game, you will get used to them – it just hasn’t happened for me yet.

The game comes with nine maps, which is a decent amount to keep you busy, especially if you play the game without activating the unlimited money and everything unlocked mode. However, some people might become a little impatient with playing it this way, as at times you will be sitting just waiting for days to pass to gain the money needed to continue expanding your city. But, if you really get into the games core mechanics there is plenty of playtime on offer – is it worth the £22.99? I am not really sure when you get the desktop version which has a lot more to it for the same price.

Cities: VR has brought Cities: Skylines to the Meta Quest 2 the best it could, with what is available and possible with the hardware on offer. With it keeping the core mechanics of what makes games like these popular, and stripping back some of the less important elements of the gameplay. But, the game does suffer in the visual side, and while playing it I was thinking to myself it would be much better suited to using the power provided by PCVR. With nine maps available if you do get into the core of the game, there is plenty on offer in Cities: VR, but you need to persevere with the lack of information in the tutorial and look up hints online if you are new to the Cities series, and you will get a lot more out of the game. Now, has Cities: VR sold me on these sort of games working in VR? Not totally, but it makes a good starting point to build on.
Buy Cities: VR
Paul Manton May 8, 2022