We enjoyed our time playing Paper Beast on the PlayStation VR, so when it came to PC we wanted to jump back in and see how it holds up on the PC platforms. We have now played through the game again, so what did we think?

I thought I would investigate and see what the games store page says the story is, and this is described with the following;

Somewhere deep down in the vast memory of a data server, an ecosystem has emerged. Decades of lost code and forgotten algorithms have accumulated in the eddies and flows of the internet. A small bubble of life has blossomed. Paper Beast is born.

Where we think some explanation would be useful in the game this does not take from what the game is doing, but at times we just felt like our attention drifted as we did not know what we were doing in the world.

The whole element of the gameplay in Paper Beast is exploration and solving puzzles. But it is how Paper Beast does this that makes the game so special. In each area of the game you are going to be joined by wildlife that as the title suggests is going to be made out off paper. The aim of each area is to either to aid these animals to get them to point needed to continue your story and of course this means navigating objects, predators and environmental elements to help them out.

All of these puzzles are based around either physics, altering the terrain or a bit of both. In order to get through these puzzles you might need to explore to find something to help with the puzzles, for example; a fire block to melt some ice. Then where you are trying to help out the paper animals in each area, these are also needed to do the aforementioned terrain editing for the puzzles – be it worms helping you move dirt or turtles that shake out sand.

One thing we found and liked with Paper Beast is each puzzle felt unique. However, these are not going to be complex and I found I was only stumped a couple of the puzzles. Meaning you will find it quite easy to keep moving through the scenes, but, this is good for the experience of what the game is offering as each scene is not overly vast – so not being stuck in the one area for a long time is a good thing.

What grabbed my interest the most in the first reveal of Paper Beast was the visual style shown off in the trailer, and getting into the world in person did not let me down. Even the opening scene had me in awe, as you start in what looks like a tent, remove the fabric from around you and see this big Paper Beast above you. Then from there on it’s hard not to stop and take in both the designs of the creatures and the beauty of the settings in each scene – even though there all very vast and open the world and the paper animals just come together perfectly. There’s many parts of the world design I could speak about, but it really is something you need to experience for yourself.

Then there are some beautiful touches you see and just think wow, one thing you get the idea of in the game is this is some sort of simulation you are in. Then as parts open like a tear in the scenery you will see numbers and letters come pouring out, you will see numbers in the sky made of clouds and even on closer inspection of the turtles, you will see the sand they shake out is all made up numbers. It’s little touches like this that shows the amount of thought the team at Pixel Reef have put into the art and design of their title.

We were really blown away by the visuals in the PlayStation VR, despite seeing some minor issues due to the limitations of the console. But, seeing this game in the Valve Index and using a the extra power the PC offers, the games presentation takes a step up. From the clarity in the world and creatures and allowing for more bloom, your jaw will really drop at points through the game.

When it comes to audio, the team have done a fantastic job of bringing the feeling of scene to life. This is done by using more cheerful background music for the lighter scenes and either just the environmental sounds or more intense music for the darker scene. This is mixed together with each sound for the creatures in this scene, that also sound quite musical – like some of the bugs sounding like maracas. What the team have done is matched the sounds the visuals and this helps bring each scene and the world to life while keeping that artistic design in place. 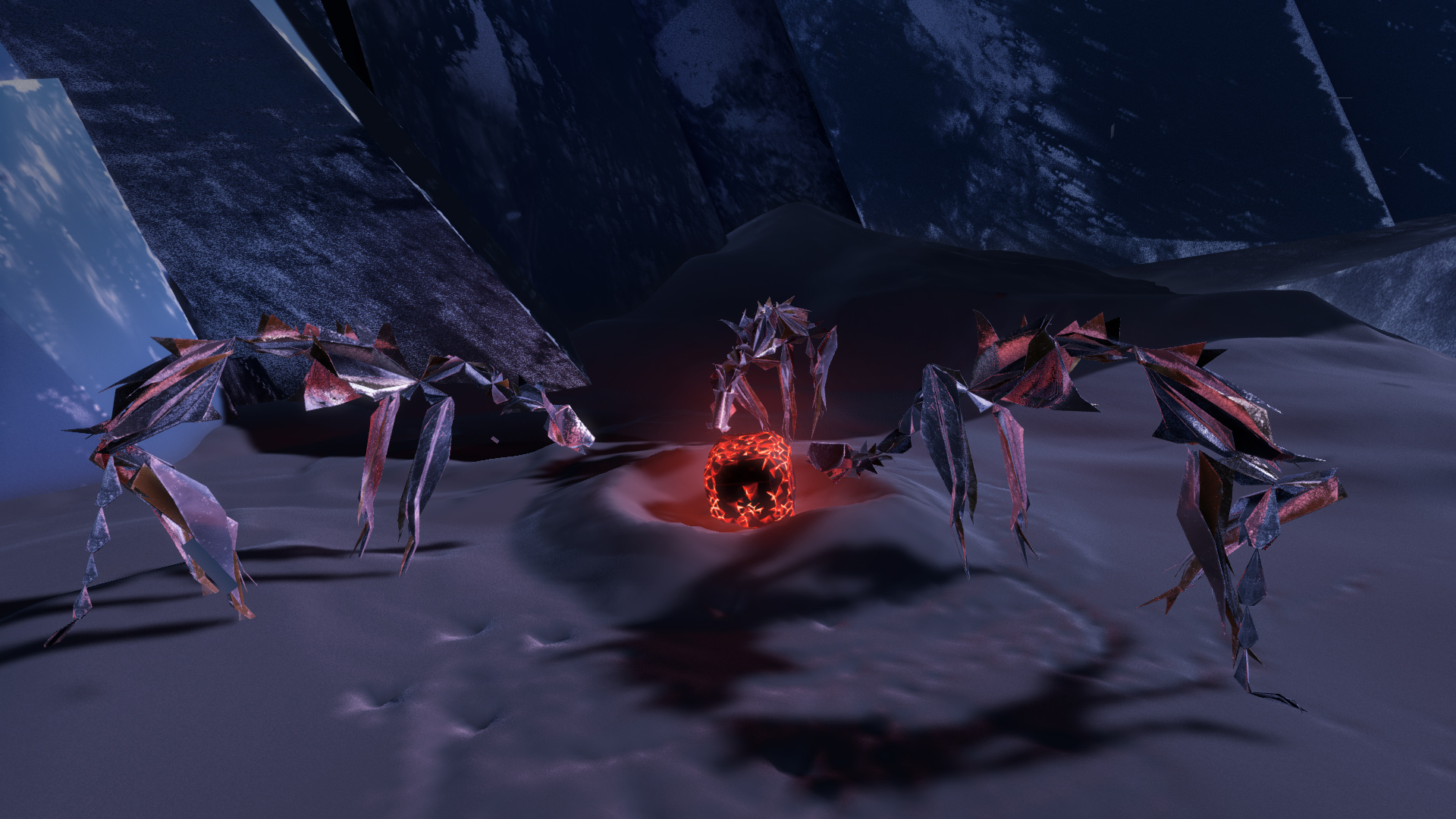 Paper Beast can be played either seated or standing, and can only be played with your HMD’s controllers with the PCVR version not offering Gamepad support and comes with a number of locomotion options including teleport, free locomotion, snap turning and smooth turning. Meaning the player can use their preferred options for comfort.

The controls are really simple, with you only using your analogues for movement and your trigger to grab objects in the game. This keeps it really simple so you can take in the beauty of the world around you.

The story mode in Paper Beast took me around three to four hours to complete, and once it is complete you can choose to replay any of the scenes from the main menu. Upon completion of the story mode, you will get sandbox mode, which will allow you to build your own little worlds in Paper Beast. This also gives you a reason to return to the missions, as finding collectables in the story mode will unlock all the elements in the sandbox. Meaning if you take to Sandbox mode and building you own world in Paper Beast, it will certainly add more time onto the game.

When first going into Paper Beast on PlayStation VR to the end of another playthrough on PC, we are still not sure what the story was trying to do. However, you can soon look over this as you start to go through the unique puzzles that all feel different and see the beauty of the games design. Add to this all the little touches and detailing throughout the world and it really does make for a breathtaking and unique experience in Virtual Reality. As with the PlayStation VR version, we would highly recommend adding Paper Beast to your purchases on PCVR.
Buy Paper Beast
Paul Manton August 20, 2020