When AGAINST was first shown off, I was really interested in seeing what the team at Joyway would do with the rhythm genre, and what new they can bring to it. I have now worked my way through all the levels the game has to offer, so let’s get on with the review.

With AGAINST they have followed suit of Pistol Whip’s latest releases and included a story in-between each stage. Now, where I was really hoping for a film-noir style story with the look of the game, this is not the route the story takes. In the story you are placed into the shoes of Detective John Black, trying to stop Dr. Vice a scientist that has become dangerous – but can you stop his evil plan?

The gameplay in AGAINST follows what you come to expect when it comes to VR Rhythm games, with you taking care of the enemies coming at you and dodging in time with the beat of the music. But, the team at Joyway have taken some unique approaches to make their game feel like a full on action rhythm game.

They have done this by mixing it up in a number of ways, firstly you have four different weapons. These are a Sword, Knuckle dusters, a pistol and tommy guns. These are switched out in the levels at different intervals, making you have a mix on ways you are taking out the enemies coming your way.

In regards to the weapons, you may have noticed previous trailers include throwing Kunai blades and a whip, the developers have confirmed these will be coming in a later update. These have only been removed for release for some final adjustments following feedback from the beta testers – and when released the songs will be remapped to include these weapons.

Outside of taking on the enemies, you will find yourself dodging and squatting to avoid barricades as you do in many of the other games in this genre. However, AGAINST mixes it up again, this is done by including the need to swipe directional arrows, this can see you wall running and jumping in parts of the levels – which also mix in taking on enemies as well. 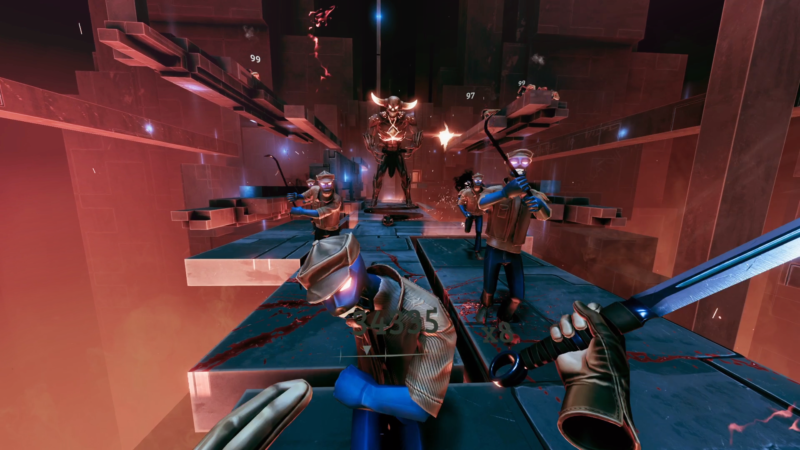 The game also includes a number of enemy types, meaning you might be slicing through enemies, shooting, dodging attacks, deflecting bullets or just straight up punching them if the face. Outside of the normal enemies, you also come up against some larger boss battles in the game. All of which have some great set-pieces in the gameplay loop.

Finally the game has launched with seven-tracks, all coming with three difficulties – easy, normal and hard. From my quick jump from easy to normal, and then finally moving on from normal to hard, I can say the pacing of the difficulties has been handled well, so, where you can see and feel the change it isn’t a totally massive spike in difficulty.

From the first trailer and beta the game has seen a huge turn around in the overall presentation, and I can say it has helped the game massively. The game has kept the cartoon-like design to the characters and set, but instead of looking one-hundred percent film-noir it also gives off the old gangster film aesthetic.

As mentioned there are different character types and all of these have been given a set look, so you can determine from the character design what type of action will be required. But, don’t worry this does not make the game easy, as when you get a string together on the higher difficulties it is simple to miss the attack type coming your way. As well each enemy type being designed differently, the games story takes you to a number of different locations, meaning your surroundings are going to be completely different, and bring with them different challenges to go with the level design.

The seven base tracks all fall within a similar genre of music, but, they come with their own pacing and tempo, so this is not really an issue. The selection of music has been well selected and of course is of a high quality – something that a game in this genre needs.

The voice over work in the story telling segments, which are told in comic book style, does leave a lot to be desired, but, again this something that is currently being addressed ahead of its release. So, this could be resolved before then.

One thing I think comes an important integration into rhythm games on VR is LIV, and I am happy to say that LIV support is available for release – so all the mixed reality content creators can rejoice and get making that awesome content from day one.

With how the game plays the game can only be played standing, due to some of the actions needed as part of the gameplay loop. You will also find yourself travelling along the level while stood static in real-life, so his might cause those with motion sickness an issue while playing the game.

When it comes to controls, as its a rhythm game these are kept very simple, with most of the actions being controlled by physical arm movements – with the only button needed being the trigger when using guns.

With the aforementioned arm movements, dodging and squatting, you might find yourself needing to stay hydrated and taking breaks every now at then to recoup some energy in longer sessions.

Over my time playing the game for reviewing purposes, I played a few levels on Easy and then moved onto Normal, in order to get through my first run on normal of all seven levels it took just over an hour. I have since moved onto hard, but have yet to complete each level on this difficulty. So, stepping up the difficulties on the seven base tracks gives you a good amount of gameplay time.

On top of this you are also given scores on each level, which will of course position you on a scoreboard. So, for those out there who like to set high-scores and challenge themselves, there is that extra incentive to return and play the levels again.

But, two things a VR rhythm game needs to keep its player base is custom map builder and the builders to join the mapping community. I am please to say I can confirm that a custom beatmapper will be available as free DLC on launch, but only time will tell if a mapping community is built.

AGAINST’s first reveal trailer really had my interest in the game, and now I have played it, I can say it really is a great addition to the rhythm game genre. With the mix of weapons and enemy types really making it feel like an action game, as well sticking to what makes rhythm games so popular. With seven enjoyable base tracks and a beatmapper being available on launch the sky is the limit for the game. But, with some of the games needs and choices, it might mean the game is not accessible to everyone, with the need to stand and the player moving along the map possibly causing motion sickness for some. With these possible limitations in mind, if you are looking for a rhythm game that mixes action with the enjoyment of games in this genre, AGAINST will certainly be the game for you.
Buy AGAINST
Paul Manton December 15, 2021