ALVO made it’s first appearance back in 2017, and since then has been through a bit a development nightmare from funding issues, to cancellations and changes within the development team – which normally brings issues in the gaming ecosystem. The game has now been released for PlayStation VR, but, has is it suffered from these issues?

The game is only playable online, and brings with a three modes that all support up to ten-player lobbies. The game modes included are Free For All, Team Deathmatch and Search and Destroy, arcing to game modes found in popular shooters Counter Strike and Call of Duty.

ALVO also mirrors these shooters in the fast paced gun-play and not mirroring the more tactical side you get in VR shooters like Onward and Contractors. This choice seems to work with the team at Mardonpol want from their shooter, and the modes they have included.

Going back to the modes, the Free For All and Team Deathmatch modes are what you expect, the person or team with the most kills wins – so it brings with it fast paced gameplay. With Search and Destroy you will have an attacking and a defending team, with two points being available within the map. The attacking team will need to plant and defend a bomb at one of these points to win, while the defenders will need to hold off or eliminate all of the enemies, in a first to five rounds scenario. This mode does bring with it team work and some tactics, as it’s one death and your out for the rest of that round. However, once you are dead you can still jump to set cameras around the map, and inform your team of enemies positions. 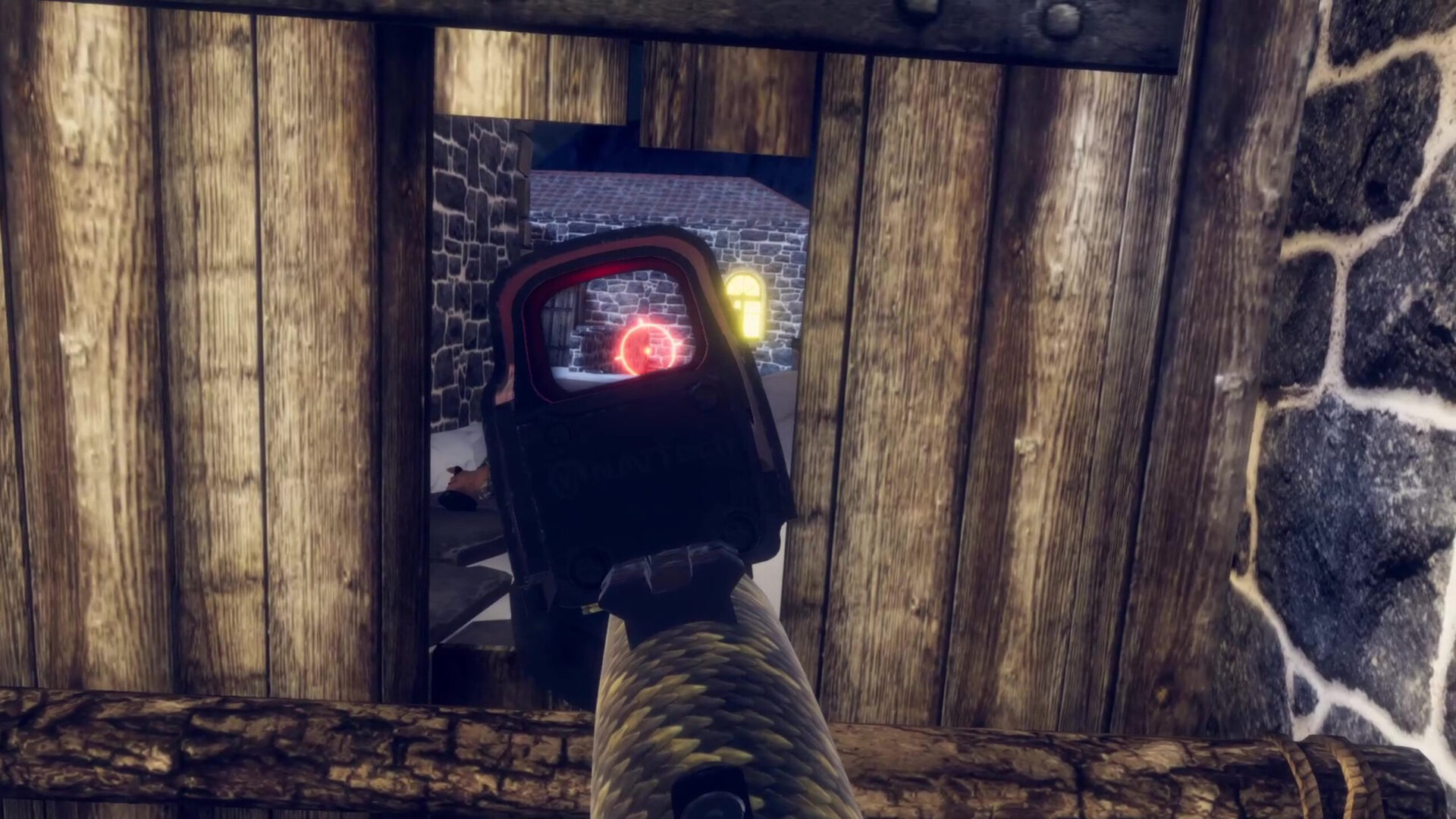 There is a number of weapons available in each of your primary and secondary weapon slots, but you do have to work for these. You will start with one weapon in each slot and all the other weapons are locked behind ALVO Coins, you will generate these by competing in the matches until you have enough to unlock the weapon you want. You will then also need to work on getting your ALVO coins for your attachments for the weapons and skins, giving the game a progression system in order to keep you going back for more.

When it comes to the weapons, the game really needs some work in the area with the stats and effectiveness of the guns. Where I understand the team are going for fast paced gameplay, being able to run around with the sniper and fire from the hip in the close quarter maps and out perform a shotgun is not doing the game any favours. I think a bit more balancing is needed for the weapons and hopefully they will do this in future updates. From what I have played the sniper is the main culprit, down the one shot kill never mind where you shoot someone – be it the head or the foot this will kill you or your opposition instantly.

At the moment you have four maps available in the game, a monastery, a house, an industrial complex and some dessert city streets – with some offering day and night variations. Meaning ALVO does offer a range of different environments to shoot and run around in, however, visuals wise all of these do not look too great, with the night maps looking better as the lighting hides these short-comings a little bit.

The game does have a great draw distance though, which allows for you to see enemies right across the map – and maybe the team opted from this over visual quality with the limitations of the PlayStation 4. One area that really has impressed with ALVO is how the scopes work, and these are up there with some of the best VR shooters on the market.

With the sound you are getting what you would expect from the shooter, sounds that suit the environments you are playing in, guns and sounds of grenades going off. All of these sounds are okay, but the explosions sometimes sound a little too loud, and the 3D audio can be suspect at times. 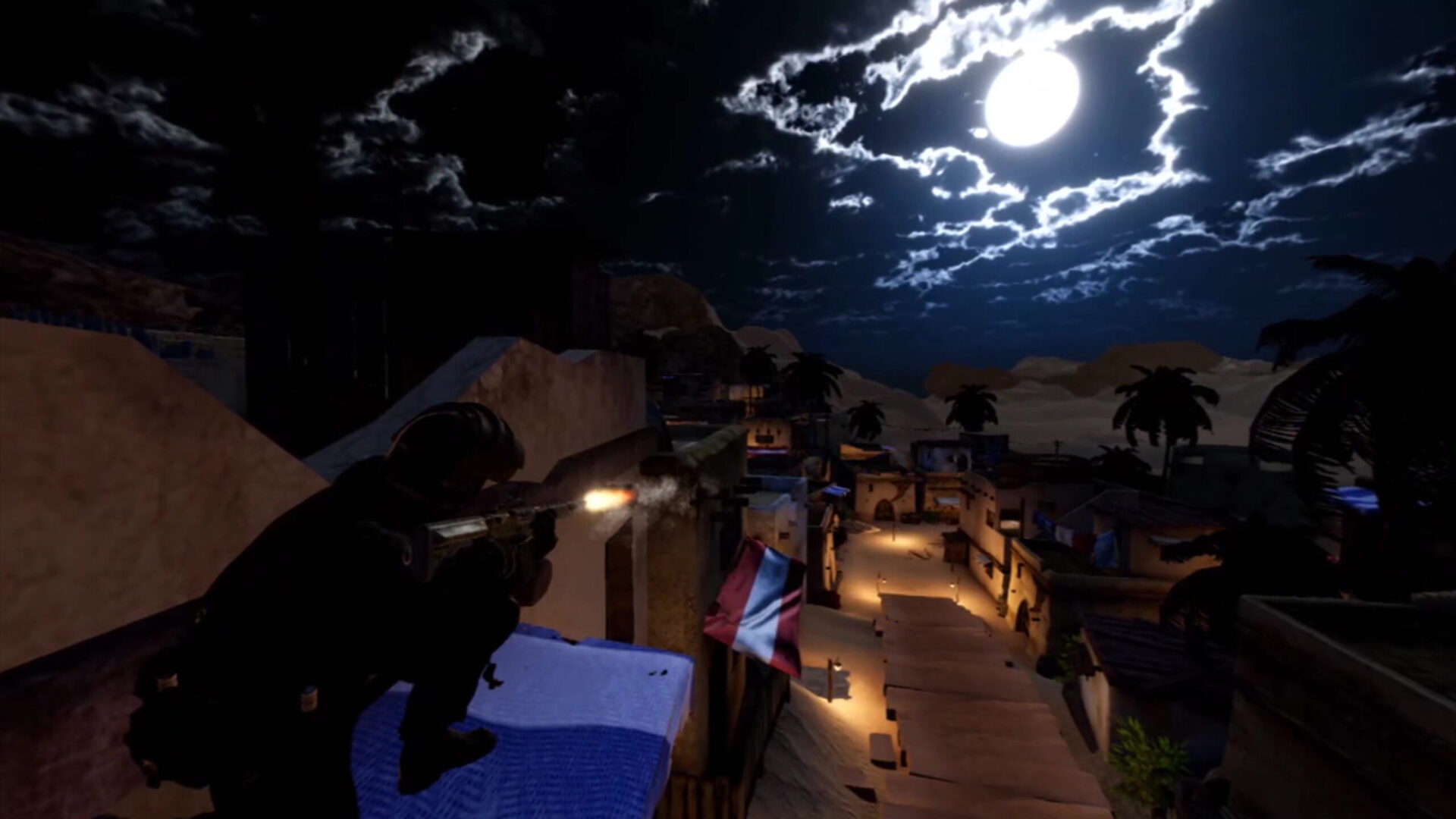 First of all ALVO comes with a good amount of comfort options, which was going to be needed for the fast pace the game is played at, but, some that are susceptible to motion sickness might still feel bad while playing the game. The game can also be played seated or standing with the game only offering a crouch assigned to a button.

You can play ALVO using three-controller options, however, for this review I have only use two of these methods, with not owning the Aim Controller – which, unfortunately seems to be best way to play the game. Also, all I want to say about the Move Controllers is do not use this method, this is just a frustrating mess. The aiming is controlled by one hand and the movement with the other, which is more of a hindrance given the speed of the game.

I did find the game played well with the DualShock controller, with the layout being what you would expect from your everyday first-person shooter, but the aiming is done by the motion tracking in the controller. I have enjoyed playing it this way, but, sometimes the scoping can be a pain – and this is where the aforementioned Aim Controller is going to excel.

When it comes to PlayStation VR, and it not having a market of solid VR shooters, I can imagine the game holding a player base – which is essential for the longevity of the online only shooter. Taking into account the games progression unlocks with ALVO coins, it gives the players something to aim for.

With the team having a road map which includes more game modes, weapons and attachments and tweaks. The game will stay fresh and bring more reasons to be collecting ALVO coins as it progresses – which in turn will bring more longevity to the title.

ALVO brings a fast paced shooter to PlayStation VR, with solid and satisfying gameplay. This is currently spread across three different games modes, so you can mix up the action to suit what you want from the game. With a progression system to unlock all weapons, skins and attachments using ALVO coins, it gives you something to aim for and reason to keep playing. However, outside of the gameplay the game has some issues in the overall presentation in both visuals and audio, however, these do not make it unplayable. With the lack of decent shooters in the PlayStation VR library, and the enjoyable fast paced gameplay means ALVO should keep a solid player-base – something that is needed when making an online only game.
Buy ALVO
Paul Manton April 13, 2021