Even wondered what it would be like to be trained as a FBI agent, Lethal VR is advertised as a FBI recruit assessment center, offered by the power of virtual reality. Originally built for the HTC Vive and ported to the PSVR – which is what I played for this review. But, did it really give the feel of FBI training?

As soon as you enter the game you are placed into a circular room, that gives an idea of what will become your shooting range. Instantly I was shocked to be asked to enter my initials, this is something I haven’t seen for a long time in a game outside of an arcade, which gave the vibe that this was going to be an arcade-type game. After playing the first few missions/levels, in terms of what the game offers in regards to challenges, ratings and scoring it is clear the arcade-type fun was being brought to you in the title – and the initial entering at the beginning made much more sense.

From the start and navigating the menus, looking down at the pistol on my hand, I felt the games visuals were going to be good. There wasn’t much they could add too much detail into outside the weapons offered, and the training facility setting, as you can only do so much with the targets used for the training. But, all the targets are done well and clear and clean in visuals and designs – also in some levels vases and statues come into play, and these are detailed and look good. Three Fields Entertainment have made the game look good from what they could offer given the idea it was a FBI training simulator.

In terms of games modes, Lethal VR is very simple and straight forward – but it works well. The game is split into 30 levels, each with different challenges, targets, and using a varied range of weapons. You are given your weapon(s) and an objective to create your best scores for accuracy and time taken; for example at one point you are given and gun and a throwing knife, and have to take out the corresponding target for each weapon. As the game starts the levels/objectives are quite simple, but as it goes on they get more difficult and can become quite fun. 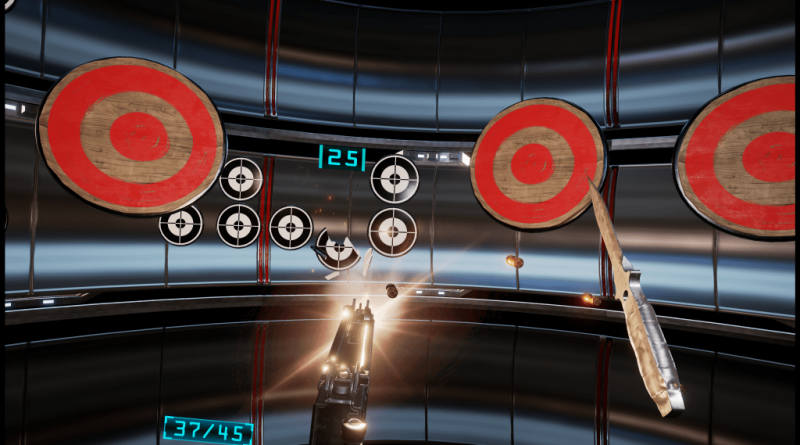 That is about it, as I mentioned previously it’s straight forward, but, this makes it pick up and play for both gamers and non-gamers alike, and they all can have good fun with this game. Meaning gameplay wise Lethal VR is very much an arcade-style shooter, that has taken advantage of the use of virtual reality. You also feel that each level/challenge uses the virtual reality that is offered on the PSVR to full effect, with targets appearing in front, left, right, above and below you – meaning you are looking around rather than just concentrating of what’s in front of you.

Lethal VR brings a lot of replay value into the game, they do this by the rating system. Many gamers will want the Lethal (highest rating) on all missions – where you can pick this up on your first attempts at times, there’s always one to go back to. Also, another use of entering your initials at the beginning, is even if you have the highest rating, old school games will know the importance and feeling of self achievement of seeing your initials at the top of a leaderboard. Again offering more reasons to return to the game, to get that top spot.

Three Fields Entertainment decided that two Playstation Move controllers are required to play their game, but given the arcade-style shooter feel and the dual wielding levels, I can’t see the Dual-Shock working. The control system was simple, the Move Controllers to aim (with the looking direction of your head), the trigger to shoot, and X or Circle to reload. Given the use of the Move controllers, and the arcade feel you would hope the controls were slick and accurate – which I can happily say I thought they were, however, there was one issue I will touch on soon. Again I found that slickness of the controls, added to both the pick up and play never-mind your gaming experience and the old school arcade shooter feel.

Now the one issue I found with the controls was the tracking on the throwing weapons. It always seemed easy to hit the targets in front and just off to the side of you, but if any were to your far side it was difficult to take these out. Meaning It had a steep learning curve to hit these, and the weapons never seemed to get at the right angle and veered off when you were throwing at these targets – this did sometimes cause some frustration, and lessen the experience you were having due to how slick the rest of the game worked. 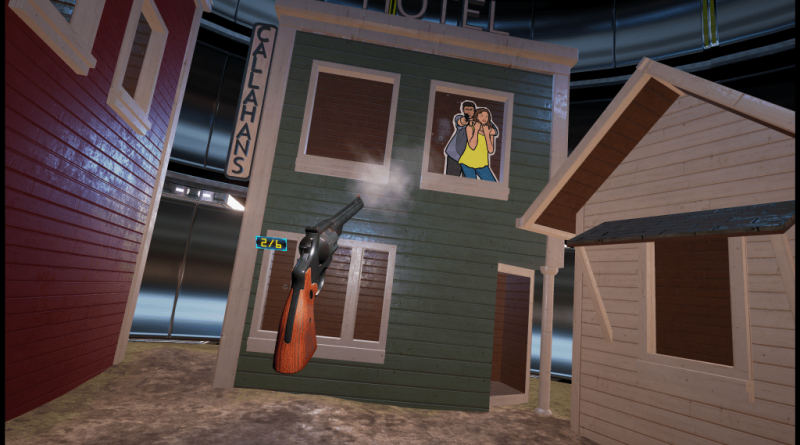 One thing I loved about Lethal VR without giving any spoilers, was near the end it had some great nods for some old movie franchises – which included one that was a big part of my childhood, and I’m sure it would have been other people’s as well.

One issue I found, as aforementioned this was originally for the HTC Vive, which took advantage of the full room experience, where the PSVR restrictions means this version only worked on 180 degrees and not 360 degrees. So, if you go and watch videos online of Lethal VR, you will need to take this into account, as you might be watching the incorrect version.

One thing that impressed me most about Lethal VR, although it is basically a virtual reality arcade shooter, it felt less a tech demo of what it can offer, and more like a game offering. Not only that, it is one of the most fun arcade shooters that I have played in a long time.

Lethal VR on the surface looks like it does not offer much, but the replay value makes the game one you will want to go back to. Mix the score chasing nature of the game with the slick and accurate control system, and it’s easy to see why this is one of the most fun arcade-style shooters that’s been available in a good while