Moss: Book II is now available to Meta Quest 2 users, I really enjoyed my time playing the PlayStation VR version of the game just over three-months ago. I was impressed with work Polyarc had done porting Moss to the original Quest, and I have now been checked out the latest standalone addition, so what are my thoughts?

The story picks up from where the last one left off, will Quill defeating Sarfog. If you didn’t play the first game, you do get a recap at the start of game – but, even with this in mind I would strongly recommend playing the first game. However, with Sarfog out the way, there is still a threat to the land of Moss, which wants the very glass Quill holds and bonds her to the Reader. The question is can you keep your glass and finally rid Moss of all it’s evils?

If you played the first, you will instantly be familiar with the gameplay as you start off. With you as the reader helping Quill get around the world and its hazards. Which brings in the ability to move items in the world to complete paths, get to higher areas and weigh down switches in your role as the Reader. All while controlling Quill in the platforming and combat elements, working together as the team you became in the first instalment

At first I thought it would have been nice to get more elements in the gameplay, as it was feeling all to similar to the first. Then about an hour in you get a new ability for your sword, that brings in new ways to attack and also new puzzle elements. Adding to this getting a new ability as the Reader again making it possible to help Quill in new ways like creating bridges and even being able to use the enemies against each other. You will also get new weapons for Quill like a boomerang and a hammer – all brining new elements and access to areas previously impossible to get to. This is all I will say as I do not want to spoil anything for you. 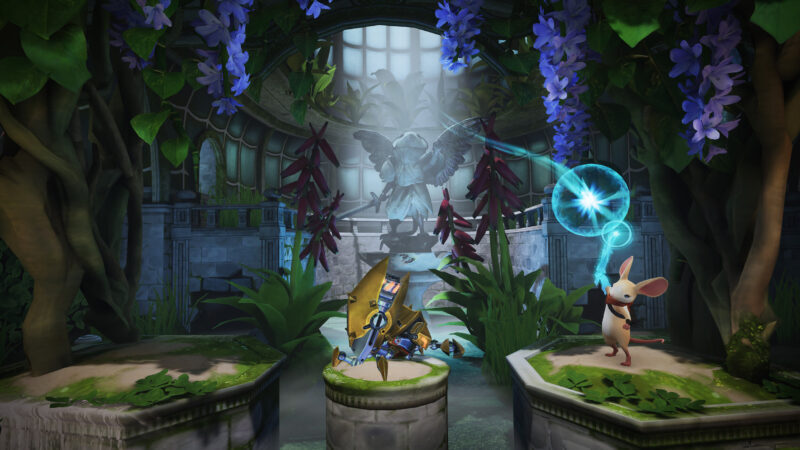 Again around the world you will be collecting dust by smashing things in the area, and collecting scrolls hidden around the levels. However, unlike the first instalment the dust does have a use in Book II. The dust will be used to open closed off areas in the levels, and exploring these will give you a new outfit for Quill, that can be changed on the fly. Then of course there are Acheivements again for collecting all the dust and finding all the scrolls.

As I expected the games presentation is on point again. The world design is so nice as the story takes you through a number settings, from a world full of plant life, caves and snow on your adventures. It seems every part of the levels have been immaculately put together to make sure you are once again taken into the world of Moss. However, you can see the limitations of the standalone device, and although they have kept the world alive and vibrant, you will see the difference if you have played the PlayStation VR version.

Once again the animation on Quill and the people you meet along the way is where the game stands out over any other in VR. This was the one thing that blew my mind in the first and has been carried over perfectly in Book II. This is essential as this builds that bond with Quill as the Reader, and makes you feel every bit connected to her – which is played on so well in this instalment, but, again I am not going to spoil this.

Putting the animation, world design and how the games work really does make for perfect immersion in a third-person platformer. With the ability to look around you as the Reader and see these fantastic environments built around you, and again leaning in and looking around them at the same time – as with the first this could be essential to finding those scrolls.

Between chapters you are greeted again with the story book inside of what looks like an old church building, which allows them to tell the story to the Reader. These pages are again beautifully designed and the narration to go with them is outstanding.

Adding to the fantastic narration in both the book sections and while playing, its the perfect audio design in other areas. Again Jason Graves has made the perfect soundtrack for the game, capturing every emotion in the game perfectly. The environmental sounds makes sure you feel like you are in each worlds setting, and there is even some nice new touches like Quill panting when she moves. All of this completes the full immersive package that Moss: Book II offers. 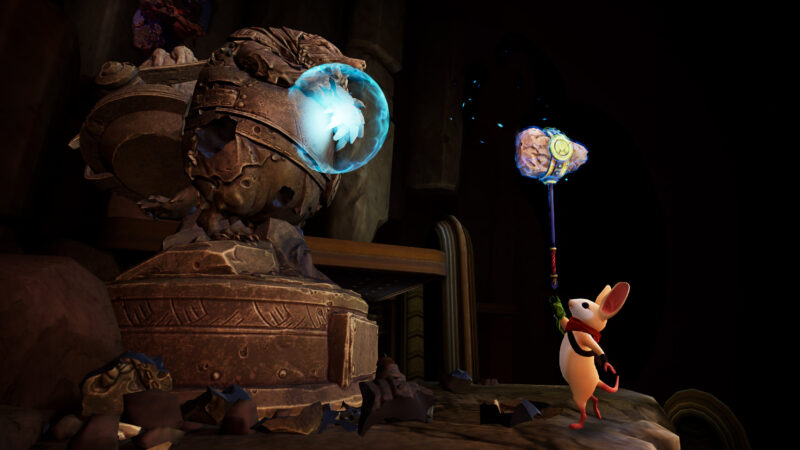 Moss is designed to played seated, and this is the only way I have played it. Other than this given you are static as the Reader in each scene, with the only moving being leaning in and interacting with things when needed – it is accessible to anyone.

As with the gameplay, if you played the first the control scheme is very similar. Again, each of your hands will be represented by an orb of the reader. These will be used to help manipulate the environment to help Quill around the worlds and to areas she can not reach. Outside of this you will use the analogues to move Quill, with the buttons controlling attacks, jumping, opening your inventory and activating new special abilities – with the later two actions requiring input from the reader.

This is one area I felt let down with in Moss, as it seemed over way to quickly clocking in at two and half-hours on my first playthrough. Again Book II has seen an improvement in this area, with my first playthrough taking around five and half hours – in which I missed some scrolls and didn’t collect all of the dust.

After completion it does unlock a chapter select if you do miss these, which will then allow you to go back per chapter and find anything that is missing for the completionists out there. Of course adding more time on the already doubled gameplay time it offers.

Moss: Book II has been four-years in the making, and the wait has been worth it. With the game improving in every area to Book I, making it feel like a true fully fledged sequel. As expected from the first the world design and audio design is on point and truly stunning, however, when it comes to the visual side, you can tell downgrades have been needed. Despite the new weapons being added the combat can still a little repetitive like the first instalment – although, the new abilities granted make for great puzzling elements. Then throw in a few surprises I didn’t want to mention in the review and the double gameplay time, and you can see the team have taken the time to make sure Book II took Moss to even higher levels. In turn cementing it as my favourite VR game and series, and once I think flat-screen games should be jealous of not being to play. Bravo Polyarc!
Buy Moss: Book II
Paul Manton July 21, 2022