In my opinion it’s been a long time since we have had a decent entry into the Resident Evil series. Capcom have stated that the game is returning to its roots, which is something I would definitely like to see, but is this the re-boot the series needed?

The story of game starts with a video message being played on a laptop, from your girlfriend Mia, asking you stay away – you are then in a car going towards a location you received in an email from Mia, and it’s explained that she has been missing for three years.

You are then in control of Ethan, and following the address you’ve been given, you arrive at The Baker plantation and the adventure starts here. You are tasked with finding and freeing Mia, while having to fight off The Baker family members and creatures called the ‘moulded’.

Through out the house there is also video cassettes, including the one you got to play in the beginning hour demo. As in the demo you will need to find the old tv and cassette player in order to play the tape – this just gives you more details of the story of what’s happened in the house prior to your arrival, and can also contain some helpful hints for later in the game. To me this was a nice addition to the game, and was an interesting take on how to cover some history, and assist you in some of the puzzles.

Capcom have taken a twist with the gameplay compared to previous instalments of the Resident Evil franchise, and moved to a first person perspective. Likely taking the inspiration for recent successful horror games like Outlast and Amnesia, which is was a great decision for me – and likely one taken for the VR aspect offered on Playstation VR (which I will touch on later). The game has also returned to its roots with being very much a survival horror game, something that the game needed to do – especially with the resurgence in the genre the series was a pioneer of.

While playing the game, you will often find yourself low on ammo, as this isn’t all over the place. Meaning when you are facing The Bakers and the moulded you have to decide whether to shoot them, or just out run them; at times I decided to try and shoot them, and missed the vital headshots and depleted all of the ammo, which could have been handy at a later time. So, it really is important to consider do you fight or run. They also chuck in a number of boss fights – which reserving ammo can be essential for in order to do the damage required.

Gone are the days of carrying a lot in your inventory, and the return of the limited space inventory, where managing what you are carrying becomes essential. The reason you need to manage what you are carrying is you have a limited number of slots, and where things like your knife, ammo, and health packs take one slot, your shotgun will take two. You will find storage boxes in the safe rooms within the house, so you can dispose of items you do not need at that point, however, when you do need them you will have to make your way back to the safe rooms. In the safe rooms you will also find the save points for the game – in homage to the old type-writer save points, these are now answer machines, although, you don’t need anything in your inventory to save, like the previous ink ribbon system.

Again moving back to the old Resident Evil games, you have elaborate puzzles to solve in order to get the key for the door to continue; okay some of these puzzles and door locks seem quite advanced and bizarre in an old plantation house, but, do not worry this does not take away from the immersion of the game. This is really where inventory management comes into effect, at times I found myself using herbs to just clear the space for the key.

As you will be able to tell from the above information, Capcom have done their best in returning the game to its roots, where taking inspiration from other/more recent greats to grace the genre.

Given the move to first person I felt like the visuals would need to be top quality, in order to support the change – and I am glad to say they’ve done a great job with them. The character models and little details around the plantation are great.

When close up to the Mia, and the Baker family (which happens a lot) the details in the characters, and the motion capture are very strong. The main issue I found with the character models was the hair on the female characters, it seemed more like strips of fabric, then hair at times – I know the hair texture is not the easiest to capture, but other games have done it a lot better. The other creatures you come across in the house (the moulded) look great, although they are essentially just made of some sort of black goo – which is what has infected The Bakers.

The environments used in the game are very well detailed, and this helps with the feel of the game, and the horror element. You will feel the house is old and dilapidated with the mould, wallpaper pealing, and the detail in the wood – which they needed to capture for what they wanted with the game.

Also, going back with the older feeling of the game, is the inclusion of the examination system for the items you find, as they could be essential to puzzles and information. Giving what is possible with the current generation of consoles, you would expect these items to be in detail – and in most cases this is the case, but I thought some of the items lacked details.

I feel that Capcom have captured the detail in what was essential to make the game successfully return to survival horror genre, and make sure you immersed in the world they have created.

There is a lot about the survival elements they’ve got back into the game, but then there is also the horror element. They have captured the right atmosphere with the changes they have made to make you feel nervous while playing the game – add to this the jump scares and not knowing what is coming up around any corner; you are always playing this game on the edge of your seat. 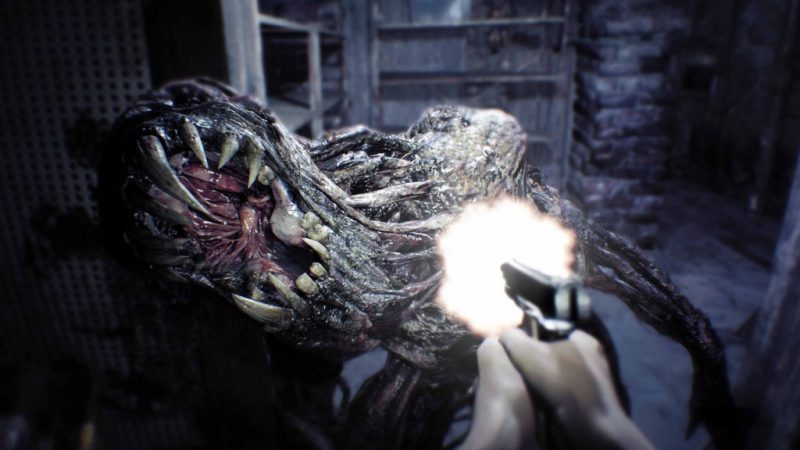 Resident Evil 7 is the first Triple-A game to be available on the Playstation VR – and it seems the game was made with VR in mind, as mentioned the previously this could have contributed to the move to first person. Personally, being able to play the game in VR, this is what the game was made for, the fact they made the whole game available in VR – means you will get the full game in this experience.

I first played the game in VR, and when switching to play it in standard mode, although the atmosphere was still there and still tense, the use of the 360 VR and the 360 VR Surround sound just gave the game that much more. Other than the extra immersion, and the feel of the extra scare factor the game was identical. As just mentioned, there is a total improvement in the scare factor when playing it in VR – the game is scary and jumpy in standard – however, add this into the VR format and it’s gets real intense. I would say I am one who is not easily scared when it comes to horror games (even movies), but there was plenty of times when I thought I want to just stop playing it and switch it off – which is something that never happened in the standard play-through.

But, playing the game in VR did have some downsides. The first one being although the immersion was great giving it was in VR it was hard to put in long sessions, and I found I needed to stop playing after about an hour or so – not down to any sort of discomfort but you just needed a break, as the product warns players. Don’t get me wrong players can manage longer sessions, I’ve seen streams in VR last the full length of the game (around 8-10 hours) with short breaks in the play, but I just don’t think sessions should last that long. The second issue was the downgrade in the visual fidelity – although it still looked amazing and you really wouldn’t expect more when your playing it, when switching to standard mode you can see the difference.

An issue that is brought up every time when it comes to VR gaming is of course motion sickness, and with this game offering freedom of movement this could be an issue. For me, even though some games have effected me this way, I found no issues of motion sickness or discomfort – but, this can effect people in different way’s so please take into account this might not be the same for everyone.

The real shame is the timed exclusivity deal they signed with Sony, as people who are using other means of VR gaming will have to wait to take in this experience.

Numskull Designs released a 4D Candle for use if playing the game in VR; this candle was made to give off the smell of the Baker household to give the game that extra bit immersion. At first I was thinking why would you want this burning your house? as the smells of scented candles hang around the house and this will probably stink. However, after trying the game in VR I thought I needed to try this. For me the candle just smelt of old, damp wood – which did suit the game, as you’re in an old plantation house. Although the smell matched the game and added a little to the immersion, after the first few times of lighting it, the gimmick of the 4D idea wore off and its now more of display item on my game shelf.

For me Capcom have successfully re-booted the Resident Evil series, and back to its rightful place at the top of the survival horror genre ladder. They have worked really hard in making sure the game captured all that is required to get the survival horror feeling back to the series, while also paying attention to those not playing it in VR – so that the experience is edgy and nervous for everyone.

Resident Evil 7 is a massive success in returning the series to it’s roots, and one of the best experiences in the series since Resident Evil 2. With the return of a truly great story, and the gameplay we all loved from the original entries, with a new twist being in first person. It’s a game that offers a lot in both standard mode, and for the Playstation VR – but if you have adopted the Playstation VR, this is the way you want to play it.

Also available on Xbox One and PC
VR mode timed exclusive to Playstation VR – No confirmation of release on other platforms
Developer: Capcom