When you jump into the first track you will feel that the visuals aren’t the best. But, I think if there was too much detail placed into the game it would very off-putting – a prime example of this are the rhyme game greats like Guitar Hero and Rock Band, these games have never gone over the top with the visuals on the fret boards, or your surroundings. Basically what you have with the visuals of Starship Disco is; the spaceship placed in front and center which is your ship, what I would describe as visualisations from media players around the edges (with a space setting background behind these), and then the different type of spaceships that make up the gameplay. So, again these is not a lot going on around the screen, but this makes it less off-putting, and really works for what the game offers.

Gameplay wise it is what you would expect from a rhyme game, the beat/pace of the music controls exactly what you will be doing on the screen. The game comes with seven preloaded tracks, these are not official licensed tracks in any way, but they do vary in style to make them all different. The difference in the tracks also alters the difficulty of each of the levels – on the first track I thought I was going to some sort of Starship Disco god, but the second track soon put me in my place. In order to keep the gameplay fresh the game provides three difficulty levels; Easy which allows ten misses, Normal which allows five misses, and Hard that allows three misses. So, the aim of the game is shoot down the spaceships that are different shapes and sizes and come from different directions, be it in front of you, below you, above you, or from behind you. You are given a cross-hair, and a target appears where the ship is going to fly to, showing where you have to shoot it – you score more by hitting it while it’s in the target. I have always been a fan of rhyme games like the previously mentioned Guitar Hero and Rock Band, so I find the gameplay for the game very satisfying, and entertaining. 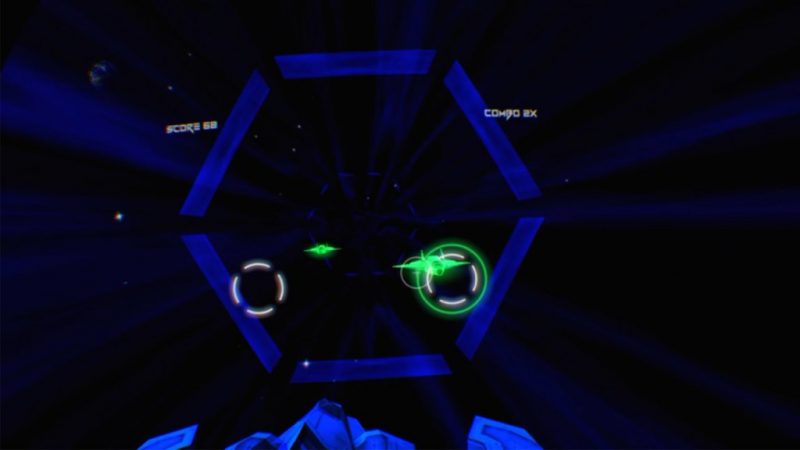 Now I know you are thinking, seven tracks is not enough to warrant purchasing the game, but hold that thought… Starship Disco has the option to import any track into the game. To do this all you will need is to own the track in MP3 format, and a USB Memory Stick with a /Music directory created on it – to me this is a massive selling point for the game. The algorithm that Solus have placed into the game for reading the tracks works so well, and every track really is different in speed and difficulty as I found jumping from David Bowie’s 5 Years to Louis Berry’s 25 Reasons. Really the possibility is endless with the Import A Track option, in order to review the game to its full potential I imported a good number of tracks from all different genres from pop, classic rock, dubstep, indie, and heavy metal to name a few – and even if I wasn’t keen on the track the gameplay at least made them bearable while they were on.

Obviously this option makes the replay value of this game fantastic. I found that even when I had played all the tracks on the game, and the ones I had to the memory stick for the review purposes, I went and added a selection of songs that I liked and played longer. I really can see myself going back to this when I am in the mood to listen to music, and want something extra while listening to it.

Solus have also added multiple control systems to the game, meaning you have a choice depending on the mood you’re in. You can use the Dual-Shock 4 controller, one Move Controller, or two Move Controllers, making for a different style of play each time. If you decide to use the Dual-Shock controller, you control the cross-hair by your head movement, and the X Button to shoot. If you decide one Move Controller you get a small spaceship and it becomes like a shooter, the cross-hair is moved by moving the controller, and using the trigger to shoot. If you go for two Move Controllers you get two small spaceships, one is blue and other one orange, with the same controls as the one controller – the difference being that you have to shoot the ships with the controller with the corresponding coloured ship on it. Again, this adds a bit more a variety to the game, although, I found that I preferred the Dual-Shock and head movement scheme the most. 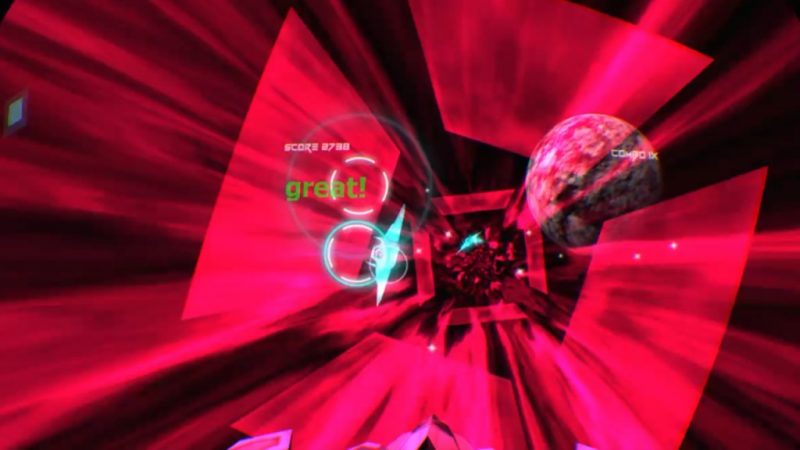 There was a one little issue I came across while playing the game, one or two times while I was playing it the spaceship I was aiming for was the same colour of the visualisation – which made hitting those targets very difficult as they were hard to keep track of, especially as they were usually fast-moving targets.

What really impressed me while playing the game, was the fact this game has been made by a one man development team. Meaning, if you take into account of how smoothly the game runs, how well the import a track works, and the fact it has three control schemes it’s an impressive achievement.

Starship Disco is simple concept that is done will. Making for a great rhyme game which runs smoothly, and has endless possibilities and replay value via an import a track option. Add to this three different control options, you can play it whatever mood you are in.