Ever wondered what it will be like to traverse around a fantasy land of floating ledges, in a Spiderman like fashion? – This is what Psytec Games have given you the ability to do in their game Windlands.

Windlands will just throw you straight into the action with a small tutorial, before you reach the hub, and start to make your way around the first area. Meaning, in no time what-so-ever you are finding yourself flying around the simplistic, but artistically beautiful settings the team at Psytec Games have created. Well not actually flying, but using jumps, leaps and some very trusty grappling hooks to traverse the landscapes in front of you – which is what the game is all about, the freedom of locomotive movement, with no bounds.

Along with the small tutorial, Windlands does not bog you down with a long-winded story, but the overall aim of the game is to get to set points on each area (three points per area in total) which will give a you a brief history of the long gone people of the world, following a disaster. Where this does provide a goal, it’s getting to these that makes the game, as it very much adopts the if you can see, you can go there mantra, and the slick paced movement and freedom makes you want to explore.

The game provides you with three areas a jungle, city and sky – with as mentioned above three points to get to in each area. You will start in the jungle area, which will then unlock the city, and finally ends in the sky area. These areas are unlocked by collecting crystals at each point, each crystal providing a bit more information of the disaster that stuck the people of this world. However, these are short, and while learning this it doesn’t feel as important as trying to get to grips with traversing the worlds. 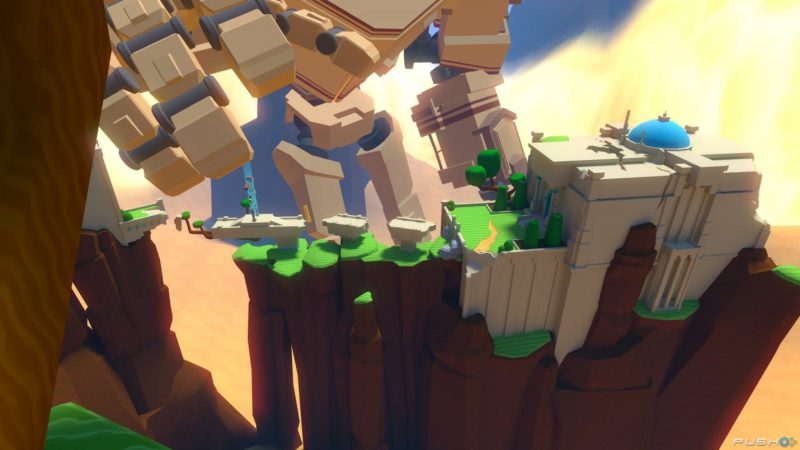 Don’t worry though, although the story is minimal there is more to the game to make you want to explore each area, as across the three areas there is a total of 120 tablets to collect, so these are reason enough to get used to the jumping, and the grappling hooks, and feeling the freedom the game offers. Also collecting the crystals will open up challenge areas in back in the hub, where the aim is to beat your best time, and it will even offer a global leaderboard – but I would not try these until you are used to moving about the environments, and on normal mode.

The reason I recommend not trying them until your used to the game on normal mode is because; the game offers the standard three difficulty levels of Easy, Normal and Hard. The only difference being both Normal and Hard mode only allow you to grapple onto bushes and trees, where on easy you can grapple onto any surface – and the time trails will only allow you to grapple onto the bushes and trees. One thing I found while trying the game on normal this lead to a few deaths and me stopping quite often to decide my next moves and plan my paths, which for me the stop start nature took away from the feeling of constant motion and freedom. Meaning I found myself going back to the easy mode, because to me the strongest point of the game was taken away on anything higher.

The controls on Windlands are very simplistic which again just adds to games tone of freedom and constant motion. You play the game using the Duel-Shock controller, and you control the corresponding sides grappling hook with the triggers, and you jump with the X button. One thing I did change was the sensitivity on the moment controlled by the left analogue, this was because you go from walk to sprinting in no time at all, and although this adds to the fast pace of Windlands it can also lead to some accidental deaths. Finally the right analogue is used to turn, so you can change your direction easily.

However, the grappling hooks will soon become your main focus of movement and momentum, given the layout of the worlds. You will soon be attaching yourself to the environments with one hook and the next part with the other, building up that sometimes important momentum needed to bridge some of the gaps (this is where the Spiderman like fashion comes into play). The way you control where the hooks are going to attach to is by moving your head and the reticule on the screen – this will light up if you are close enough, and can grapple the surface depending on the difficulty level.

Although the control scheme is simple, it will take sometime to get used to the movement and momentum building, so don’t expect to go dive straight into the game, and be an expert of traversing through the areas. It will take practice meaning that a 100% smooth run is highly unlikely on your first play-through of each area.

Visually Windlands has a very simplistic, but artistic style to it. I personally thought the worlds they have created are beautiful the more time I spent with the game. At first when you do the tutorial, and enter the first world you might get the initial feeling that the game is a bit bland. But, you soon realise that they’ve done a great job in creating beautiful and unique worlds, with the bright colours standing out everywhere you look around the areas. With one really impressive part of the game coming when the dormant Titans (and they’re huge in scale) come to life and start to move around upon collecting the crystals – this is a sight to behold, again though this sort of distracts you from what is being said in the story, due to this happening at the same time.

One thing you have to take into account when looking at Windlands is due to the fast and constant motion the game offers, those who don’t have VR legs could find Windlands uncomfortable to play. One thing Psytec games has done well is providing a few options to reduce this discomfort. These come in the form of making the turning with the right analogue more staggered, and the option of a cage, transparent cage, or no cage around you – meaning you don’t feel as free. I found I only needed the turning on staggered to save me from any discomfort, but this will vary per person. My advice is try to ease yourself into Windlands and find what works for you – this is even recommended by Psytec Games at the beginning.

Where Windlands very short story might make it feel there is not a lot of content, this is combated with the 120 tablets to collect for the completionists out there, and the time challenges available offering some replay value if you want to try better yourself, or those on the global leaderboard. My main issue with Windlands is although it’s understandable the higher difficulty levels restrict what you can grapple onto, as this is really the only way to make it more difficult – it makes easy mode the best way to experience what Windlands offers.

Windlands offers a unique world, art style and experience to the other games available on the Playstation VR. The story is made to feel like it is not that important, but the game excels in the movement and the many ways to traverse each area. However, the games fast pace and idea of constant movement and momentum might mean the game is not for everyone.