As you would expect with the name, the main element of the gameplay is going out and catching fish in the games multiple settings. This simulator brings with it a huge level of realism, making for entertainment and also some lessons is fishing in multiple conditions. The realism is brought together as you start out with the basics, but you are soon going to need to use your money to buy new equipment as your starter set-up just won’t hack it. You are going to need the correct set-up from rods to bait for each style of fishing and the fish you can catch.

Once out in the settings and fishing you are going to need to cast your line, hook the fish, get the right tension on the line, tire out and reeling in your catch. Failing to manage the tension, strike to early or give the fish too much line and say bye to some of your bait and some of money, as you need to buy all your bait. So, not only do you need to monitor your cash for upgrades to your equipment, but, you need to make sure you have some for bait.

One thing we really liked was once you have cast out, you have the option to switch view to underwater to monitor the fish and your bait. Meaning you have a good view of the fish and the size of the ones taking an interest to the bait, this can pre-empt the fight you are going to have getting into land. However, if you want the true immersion you can just monitor the float and strike when ready – although this is the most immersive way to play the game, we played a lot monitoring the bait underwater. As you progress you will need to consider items like fishing nets and rod holders – all bringing the true fishing feeling. The detailing in getting your prefect set-up is also taken to a new high level for the VR medium. For example; if you get a new float you have to make sure you add the correct weight of lead onto it to get the optimal use from that float and for it not to sink.

As aforementioned there is different settings to go fishing in, with them bringing a mix of fishing styles. In the base game you get ten stages. These branch across lake, ice, boat and sea fishing, with each level bringing a mix of different fish to catch. We personally were a big fan of the lake settings, you can also choose the time of day you are at the settings, switching the feel of each environment.

Outside of your inventory management, you are also going to level in the game. With each level up you will be able to add a new perk, these come with a range of skills, discounts, XP boosts and other pieces of equipment needed for some of the settings. You will also unlock new equipment to buy from the shop, and you will need to level to unlock the stages. All the stages will be unlocked by rank nine, with the highest unlocks coming at rank twelve.

Your final choice in the gameplay, is to sell the fishes you have caught or release them to live another day. If you choose to release them it will reward you with some extra XP, so you will get some bonus for releasing them. It all depends on what is most important to you at that time. So, far we have been selling most of them, as money is more important at the beginning, as you need to sort out your equipment and inventory and also buy licenses to fish in each settings – with each setting getting more and more expensive for a licence. 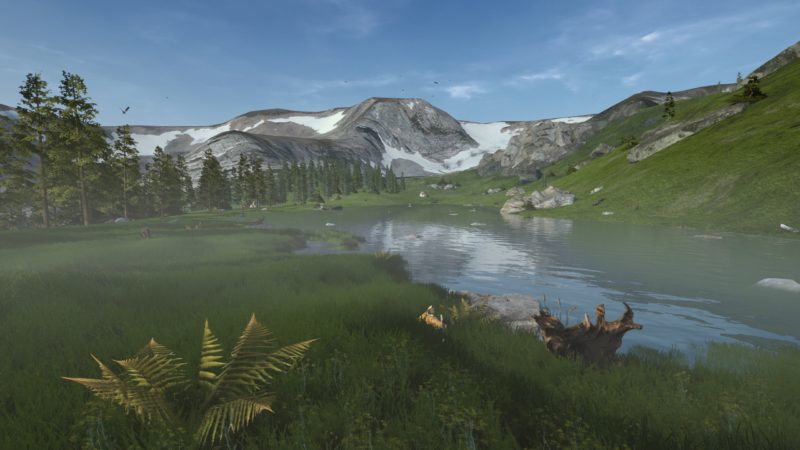 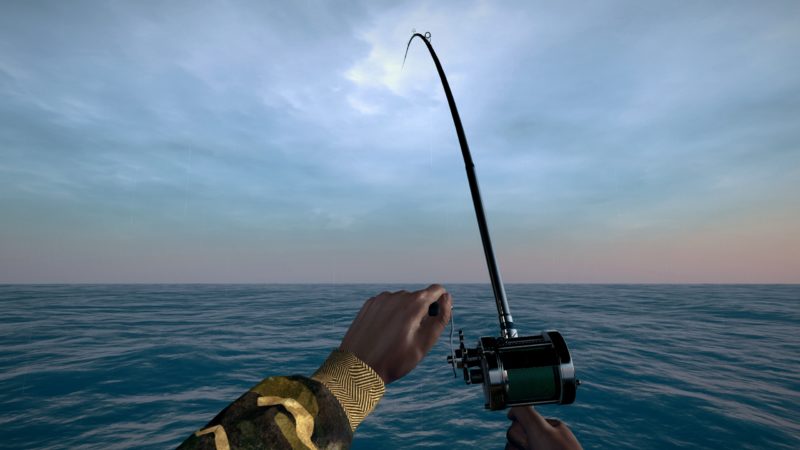 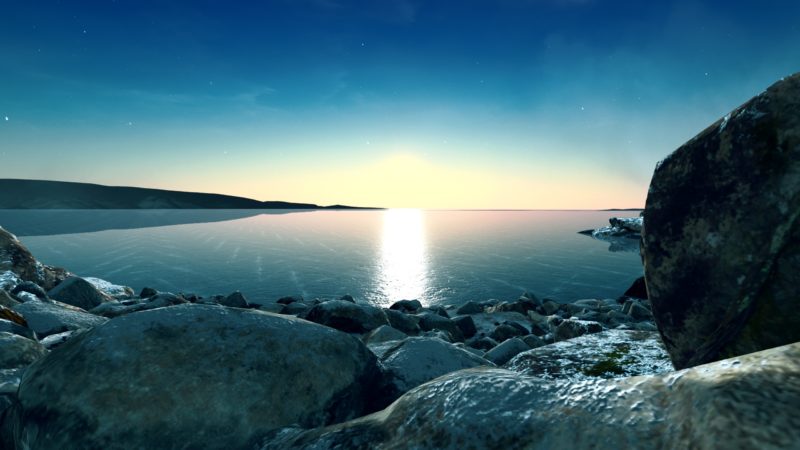 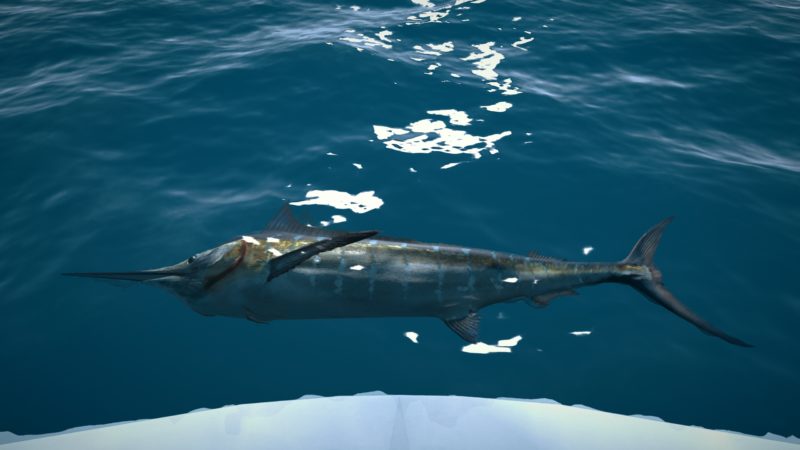 With this coming as an extension from a flat screen version of the game, as you would expect given it is a simulator the visuals take a realistic approach. Each of the games settings we have visited while having this hands-on with the game all look stunning with fantastic water effects, making sure you are immersed in each setting. All the environments have a high level of detail as well, from the surrounding backdrops to each part of the settings you can make your way around, be it by foot or boat.

Of course there is some downgrades compared to the flat screen version of the game, but it still brings a high level of detailing the equipment and the settings when in VR. Although, we have seen some visual glitches in VR, with sometimes the fins on the smaller fish floating away from the body – no doubt this will be sorted while the game is in Early Access.

With this being a realistic simulator you are going to be quiet while fishing, meaning the audio is made up from the noises you would expect. The noises from you casting out and reeling in, the environmental noises that suits each setting you visit, and sometimes the fishes surfacing and jumping in the water. This was essential with what the game is doing, as it keeps the realism you want in a simulator and keeps you immersed in the game.

When it comes to the controls it is very well mapped to the Oculus Touch controllers with you holding the trigger on the hand with the rod and letting it go mid-swing to cast, then lifting you hand to strike the fish, which can also be done with reeling once they have taken your bait. Then of course you will be using trigger on the opposite hand to grab the reel and doing the circle motions to reel in the line. Outside of these controls, the grip on the rod hand with change to the underwater view, A on this hand will reset your cast without the need to reel it in, the analogue with increase and decrease the drag on your reel. Then on your other hand pressing the analogue in with turn on and off the pull, X will open the quick menu and Y will open to main menu.

When not actually fishing the analogues allow you to move around the setting freely, but you can get quick teleport points on each map in the menu. When driving the boats, you will just be using the analogues, which is a shame as this could have been down by gripping the wheel to add that extra immersion.

How much you are going to get out of the game really depends on if you take to the game and it’s realism. The game is launching with all the content from the standard version from day one, meaning there is plenty of content already available to keep you entertained. If you do take the game it is going to have an endless playtime, as you will always find a nice relaxing setting and feeling when jumping into the game – making it perfect if you are in the relaxed mood. Even when everything is unlocked you can aim for catching new record fish to add your stats.

It is also worth mentioning with the VR release of the game, it will give you full access to the flat screen version of the game. Meaning you might even find yourself jumping in to it outside of VR, if you need a break or are just not in that VR mood. With that in mind, if you already own the flat screen version, the VR mode will be available as paid DLC – but, no price has been confirmed yet.

Even as someone who does not fish in real-life, I have found myself becoming hooked on Ultimate Fishing Simulator VR. Not only am I enjoying my time by the lakes or out at sea, but I am also learning a bit about fishing, from what bait and equipment is needed for each style of fishing and all about the management of drag and tension. With it being in Early Access you will find some issues, with the main gripes for us coming from the glitches in visuals on the smaller fish at times and the boat control not being manual. But, with the game still being in Early Access there is a chance that extras can be added while it finishes it’s development. We are interested in seeing what comes to what is already a solid fishing simulator in VR.