One genre that has always been popular and in some cases over populated in VR is Rollercoaster games. But, one element of this genre which is appreciated is games that bring shooting elements with them – with our favourite being Until Dawn: Rush of Blood. The team at CREATIVE VR3D which consists of two brothers have brought Darkness Rollercoaster to this genre, but how does it hold out?

As mentioned the game is a Rollercoaster Shooter to give it a name. Meaning you are getting the joy of the rollercoaster experience, while also shooting enemies, blocking incoming projectiles with a shield and dodging when objects around the tracks are likely to hit you – by moving the cart left and right. Now, this is where the game struggles a bit, as the takes a step back compared to others available on the PlayStation VR, down to some design choices.

The main cause of this being that the in-game hands are sort of floating at the top the Move Controllers. Which the main issue in this being that it makes the aiming accuracy off, and it takes some time to adjust and accommodate for the difference in the distance from your own hands and where they are represented in the game. Then this issue travels over to the bonus mode they have added.

What is this bonus mode?… this is a take on the very popular VR game Beat Saber, which will have you slashing the monsters from the game with Sabers to in-game tracks. Where this makes the game offer a little more from the Rollercoaster Shooter action, it isn’t all that compelling compared to Beat Saber. Again, the sabers will be floating in front of you, not in sync with your hands, which will cause a number of missed slices and takes away from the experience – and honestly becomes more a frustration in your break for shooting.

The final element of game is an Exploration mode, which isn’t what it sounds like. What you will get in this mode is a number a rides, which act just as rollercoasters without the shooting and offers the option to sit back, relax and enjoy the tracks in the game. 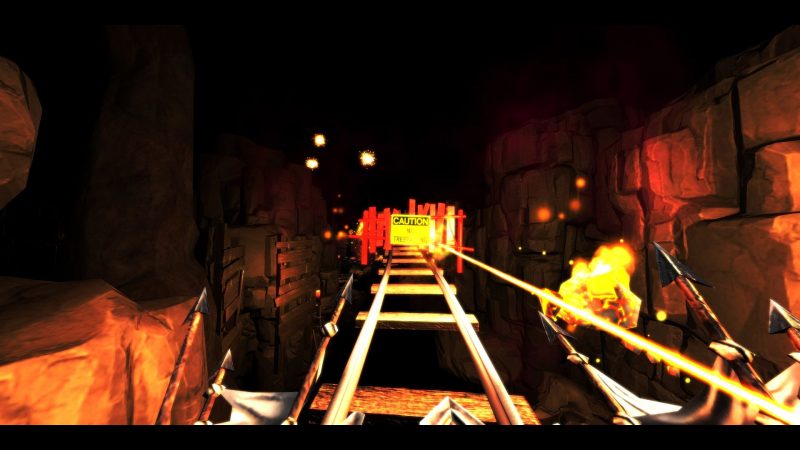 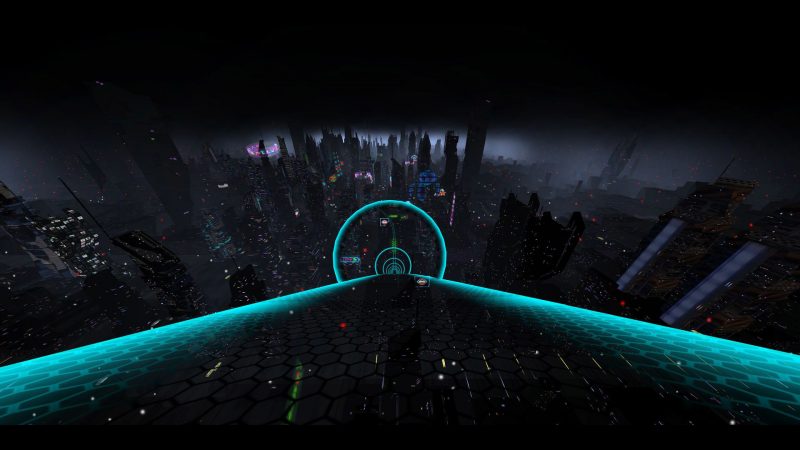 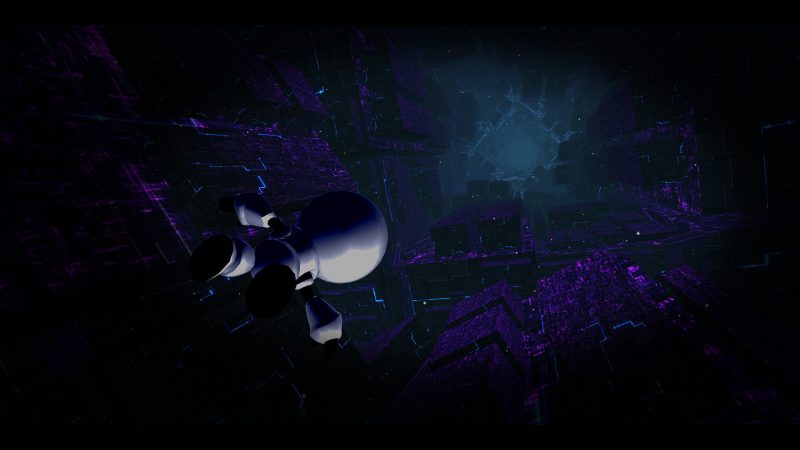 As with the gameplay, the presentation really does come as a bit of the mixed bag. Where visually there is parts you will think look great, these are mixed with underwhelming and sometimes dated looking visuals. This is a recurring theme across all of the four tracks the games offers as it’s main campaign levels with the themes Fantasy, Adventure, Space and digital type world. However, where parts of the worlds look great, especially the aesthetic of the digital world it never ‘wows’ you to the point of looking stunning. Which shows the games and dev teams mobile VR roots – as this is their first game outside of Cardboard and Gear VR.

Again we get a similar story with the sound in the game. The music fits each track, but they throw in some voice over work that sounds like it has been edited to be slower and lower on a low-budget program. These aren’t a constant part of every track, so it does not distract you or take away from the experience. Then the songs used for the few bonus levels are decent enough tracks, but again not ones that fully stand out.

When it comes to comfort, the game is to played seated, given the rollercoaster aspect of the game. Then with this being the rollercoaster experience it is, the final part of the comfort is going to depend on the users tolerance for rollercoaster rides and motion sickness. Where personally I do not suffer from motion sickness in VR, I can see parts of the game that could as the track speeds up or has those more sharp corners – this is down to the game offering no comfort options like blinders for those who need them.

The game allows for the use of a DualShock 4 and Move Controllers – for the purpose of this review we used a pair of Move Controllers. This is because in the game you to use your wand in one hand and the shield in the other. You are going to use the triggers on the move controllers to fire or active the shield, Square to reload and then you can use the Move buttons to slow down time for those more hectic sections and to change the visual style in the game. This is all you need on the controllers, when it comes to dodging the elements in the level that you can hit, all you need to do is tilt your head to the side you want to move towards.

The game does offer support for the 3dRudder peripheral, but given the little you need to do in the game itself it is not a game changer for this title – as it can be others. The ways the foot-controller is used in the game are tilting it left of right will replace the head movement to dodge, and then tilting it back will reload your wand. Personally I found that the reloading with the 3dRudder felt a lot more smooth than pressing a button.

When it comes to the longevity, in order to play the four set tracks and the checkpoints needed in-between the tracks you are going to get about 45 minutes of out the game. This is down to the checkpoints being randomly generated tracks between the four main ones. However, this is where the game could offer some longevity outside of the main tracks, as you can take to some random tracks as well as the bonus Beat Saber style levels. Then you can also move back to the main tracks and try to set scores for the leaderboards if that is your thing. But, I find that this would not be something I would choose do myself, as there is games like Rush of Blood offering more.

Where I would not say Darkness Rollercoaster is a bad game, it is just a mixed bag in every area – it is like it takes one step forward and then takes that step back. However, if you are looking for a fix of Rollercoaster Shooting action the game will scratch that itch while offering a few extras – and for £7.39 (GBP)/$9.99 (USD) it wont break the bank.
Buy Darkness : Ultimate Shooter Editon
Shares
Share on Facebook Share on Twitter
Paul Manton February 12, 2020