We were a little surprised how much we enjoyed Doctor Who: The Edge of Time when we played it on PCVR, so, we were happy in the knowledge it would make its way to Oculus’s stand-alone VR HMD. We have now had the chance to playthrough the Quest version of the game, the question is how does it hold out on this device?

As this story plays out you will visit and number of different locations trying to locate a time shard to help with your mission. Each of these time shards will see you solving puzzles, using the sonic screwdriver, activating the TARDIS and encountering enemies like the Weeping Angels, Darleks and other creatures along the way.

Meaning at heart the game is a puzzle orientated, and in the most cases it won’t take you long to work out the puzzle elements. There was only really once I found myself having a struggle working out what to do, because in most cases you will be given help by the disembodied voice of the Doctor or Emma who you encounter through the game. However we did not find this much of an issue as the puzzles are fun to solve and it means you don’t get stuck waiting to continue the adventure – which is what Doctor Who is all about.

There was one section of the game that really stood out to me, and that was when you get inside of a Darlek shell. Although this shooting part is very generic feeling when it comes to the gameplay, it’s easy to get over just for the fact you are a Darlek. 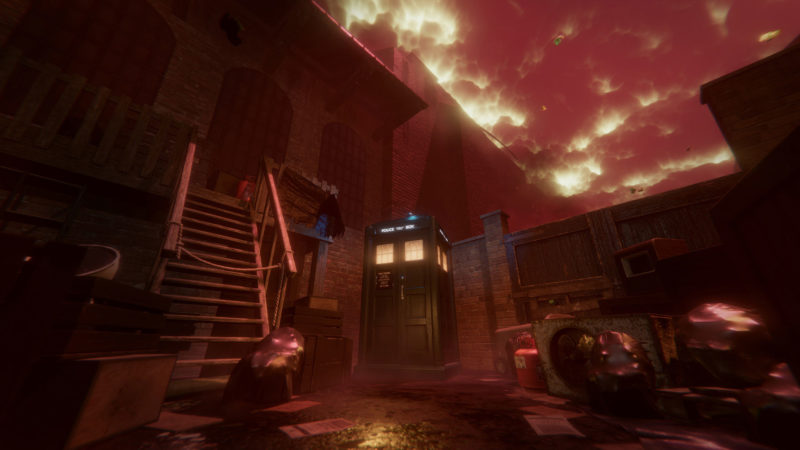 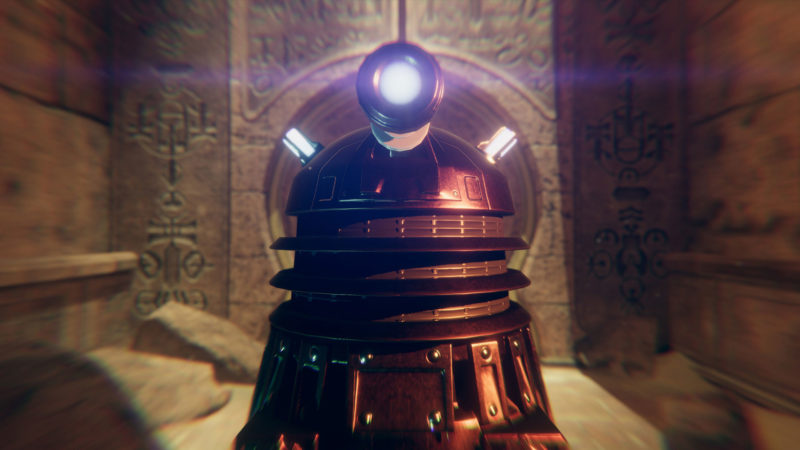 One thing that really impressed me when playing the PCVR version of the game, was the overall polish in the games presentation, which has had to stripped back a bit to get it running on the Quest. However, they have made these alterations to the presentation in the right place, with the likes of the textures on some of the environmental elements being more 2D than 3D. For example; the moss on stones. Despite these being needed to get it running smoothly on that stand-alone device it still looks nice, and still keeps you immersed in the Doctor Who universe. I think we noticed it more as we had seen the polish on the PC version of the title.

When it comes to the audio they have made it feel authentic by using Jodie Whittaker herself as the Doctor, which of course brings very solid voice acting to the game and this is the same with Emma and other characters you hear throughout the adventure. The environments are built up with the sounds you would expect in each location, to make sure you are fully immersed in the world. With the final element of the sounds being the music to set the tone and tension in the more dark scenes and allowing you get the feeling you expect the Doctor does in the TV show.

The game brings with it all the comfort options to make it accessible to everyone. You can play the game seated or standing, and in the options you have the choice of snap or smooth turning, to use blinders for your locomotion and set all your locomotion speeds.

As usual in this sort of game, your hands will be represented in the game by each touch controller. There really isn’t much to the control scheme, with the analogues controlling your movement, the A or X button to teleport, your grip buttons grabbing items and the trigger to use items like the sonic screwdriver.

The game will take you around two to three hours to complete, all depending on how quickly you solve the puzzles. With the story being the main element of the game, but with it giving the feeling of being in your own Doctor Who episode, it means some might return and give it another playthrough, but some might not. Meaning if you fall into the later you will not really getting any replay value from the title.

Doctor Who: The Edge of Time is a must play for any Doctor Who fan, as it has a great story that wouldn’t be out-of-place in the TV series and gives you the feeling of being in your own episode. Despite the need to remove some of the polish showcased on the PC version of the game, the world is still beautifully built. So, the first time you step into the TARDIS you will blown away, and when first seeing the Weeping Angels and the Darleks you will get goosebumps. Despite it’s short gameplay time, we would recommend this game to anyone who wants to know what it would be like in the world of Doctor Who.
Buy Dr Who: The Edge of Time
Paul Manton February 3, 2020