We were left with positive impressions of the Early Access release of In Death on PC, but we never really visited it outside of the Early Access build. So, when Superbright announced they were doing a Quest build of the game, we knew it was time to rise to the challenge again, but, what did we think?

In Death does not really come with any story, in the game you are in purgatory and on your death, you will just be placed in back were you started where you can look at the scoreboards, the achievement’s you’ve unlocked and your progress in these achievements. After this you can move back into purgatory and go again, until your next death – so the game plays out as a rouge-like dungeon crawler.

When it comes to the combat in the game, you only have the option for long distance combat. The game will provide you with a bow and arrow or a cross-bow, with the latter needing to be unlocked with achievement progression. Outside of the weapon of your choice out of the two you will get a shield for blocking, which is going to become important as you take on more aggressive enemies along with the deadly accurate archers. Meaning it will become very important to know when to take your shot and when to be ready to block with your shield.

With your combat being all bow and arrows, the accuracy of this was going to be a main challenge of the gameplay elements. We are glad to say the responsive and accurate bow and arrow gameplay has transferred to the Quest perfectly, and for us is still the best in the medium.

You will start out with a standard arrow each time you respawn, however, enemies might drop different types of arrows that will deal more damage like fire arrows or arrows the split into smaller arrows to name a couple. As you get through each section of purgatory, you will be presented with a tower that will allow you buy arrows or some more heath. As with the arrows, there is also the chance the enemies will drop a heath point for you. The way you will buy your arrows and health is through killing enemies, which will grant you some gold, however, rush through and you won’t have enough gold to buy things – so, keep this in mind.

This leads you the main element and one of our favourite elements of the game, and that is the Dark Souls-esc difficulty level. You will only be able be hit six times before you are dead and back to starting over again. This is where those aforementioned health drops or buys will come in handy, and it really has you weighing up what is best to buy at those points.

You may be thinking the die, spawn, repeat sounds like the game will soon become boring, but purgatory is procedurally generated. Meaning you are never going to play the same dungeon twice, and the enemies will also vary.

In Death is made up of very light colour palette in the most case, but, as purgatory is made up of a Cathedral setting, this colour pallet matches it perfectly. When it comes to the textures in the game, with this being on the standalone device, there has had to be some downgrades to the overall quality of how the game looks. However, even with this in mind the game still looks great inside the HMD and keeps you immersed in the world and setting.

Audio wise there is not a huge amount to the audio, with the majority of it being made up from your bow and arrow noise and the moans, groans and movement of your enemies. Again though given you are in purgatory the eeriness of the silence makes sense and works in the games favour. The only other audio you really hear in the game, comes into parts like the boss fights, where you are going to get a light background noise of Gregorian Chant music – which, of course suites the Cathedral setting of the game.

The game can be played either seated or standing, as the mechanics will work from either of these positions, but we found the best and most immersive way to play the game is standing. For movement the games uses teleport arrows for your bow, meaning you will need to make sure you take out your teleport arrow, which will cause a panic at times when it’s getting hectic. However, another option is the teleport shard for dodging, this can be a really handy thing at these times.

We feel this movement mechanic works well for what the games does. and this will be the only movement option available at launch. However, the developers have listened to feedback from testers and will be implementing free locomotion into the game in a future patch. 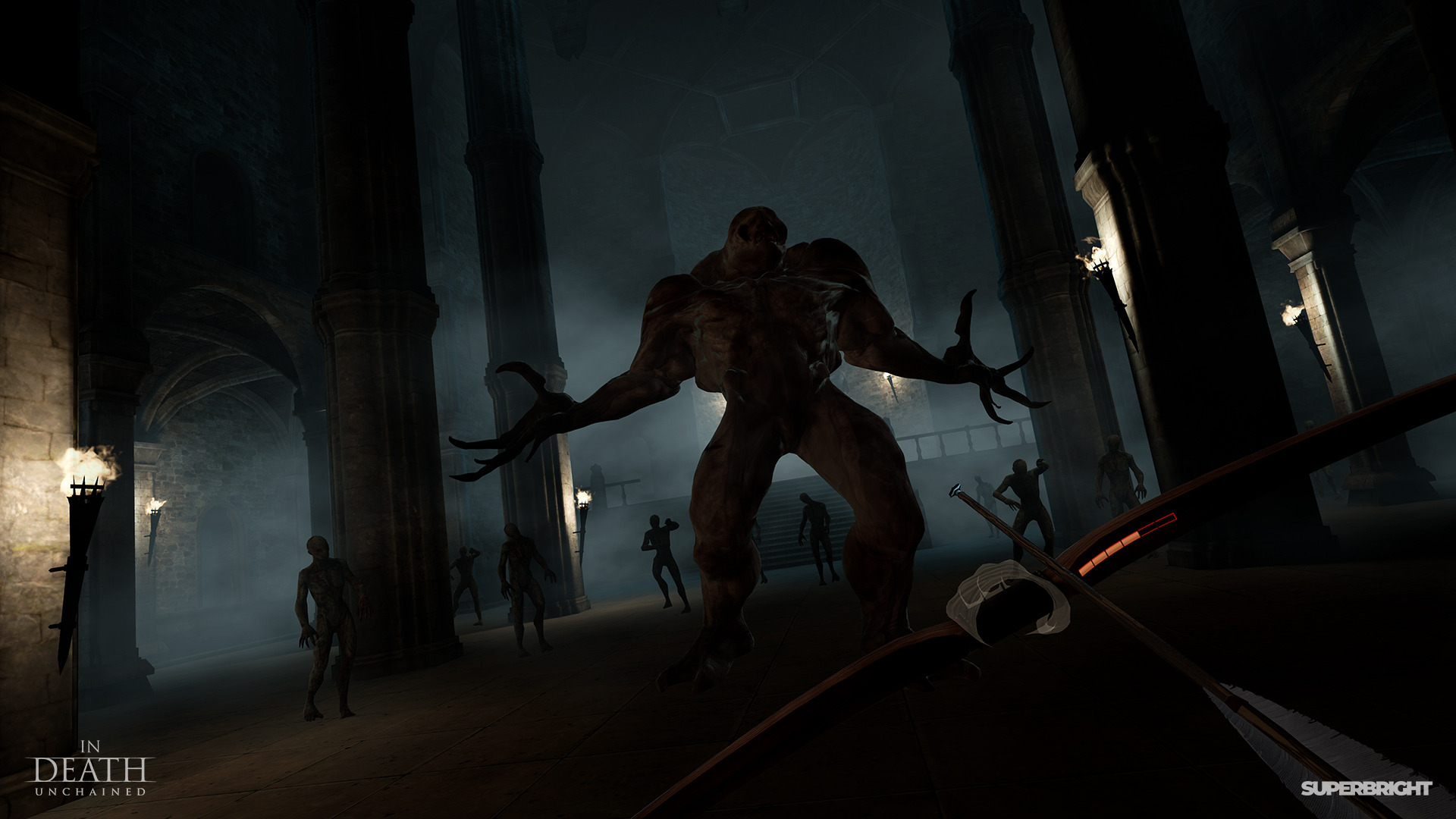 The controls are easy to get used to, with the bow being constantly in your hand, there is no need to remember to grip it. This allows the grip button on that hand to become available to be mapped to the teleportation shard, and the only other use on the bow hand being both buttons pressed together bringing up the an option of three arrows (depending if you have bought or picked any up). In your other hand the trigger will be used to pull back the arrow, the grip will get your shield out and the two button combination will give you your teleport arrow.

When it comes to longevity given the games procedurally generated dungeons, as long as you are enjoying the frustration in brings you can go back to the game whenever you are in mood. The game brings with it leaderboards, meaning if you want to showcase your skills to others you have something to keep aiming for. Also the game brings in achievements, but these aren’t your standard achievements. As aforementioned progressing through these can bring bonuses like the cross-bow and unlocking the Abyss – a new mode on the Quest version of the game.

The team at Superbright have done a great job in bringing In Death over to the Quest. Keeping the excellent accuracy and responsiveness of the bow and arrow gameplay with it. Where the game has faced some visual downgrades given the standalone nature of the Quest it still looks and runs great. With one of our favourite features being the difficulty – however, where some might see this as a selling point it could deter others.
Buy In Death: Unchained
Shares
Share on Facebook Share on Twitter
Paul Manton July 23, 2020