The new and improved Oculus Quest 2 is now upon us, which was quicker than we expected. With this in mind we have been running the Quest 2 over some intensive testing since it was released to try and offer the best review we could. So, now all of our testing is out of the way, what do we think of the device?

Inside of the box you get the Oculus Quest 2, two Touch Controllers, a USB-C to USB-C charging cable, a power adapter and a glasses spacer.

One area that had us worried about the Oculus Quest 2 was the point they were trying to make it even more affordable than the original Quest, which of course was going to mean some cut backs in set areas. The concern that came with this was, would the overall quality of the device take a hit.

To our surprise once we opened the box and took out the HMD we could see that this was not the case for the body of the device. With it being made out of similar hard and sturdy plastic that was seen on the original, with the only real difference being the main body around the faceplate was not covered in the fabric found on the Quest. During testing we managed to catch the HMD with a controller by accident and with quite some force, and to our surprise we found no marks or scuffs on the plastic body – which further eased our belief it would be made of cheaper materials.

For the face gasket they have used the same sort of foam they have continuously used throughout their consumer releases. Meaning you are going to get a face gasket that is going to collect sweat over this time of use, and is this is connected to the plastic frame of the gasket directly it is not easy to wash or replace. As with all of our other VR devices, we can imagine this will eventually be replaced with a VR Cover face gasket.

There is one area they have taken a step back in the quality to reduce price and that was replacing the head-strap with one similar to what they provided on the Oculus Go. For the purpose of this review we did use the base head-strap for around three to four-hours to see how it performed, and to be perfectly honest we thought it did a great job. Our main concern for this strap was, would it be comfortable for longer sessions, as although the device is ten-grams lighter overall, it is still going to be front heavy. However, we used this over a full battery charge; with no breaks and switching between different types of games, and found comfort was not an issue for us at all.

The battery life your are going to get from the HMD is similar to what you get with the original. With it lasting around two-hours if your gaming or three-hours if you are watching media through the device. With a full battery charge once flat taking around two and a half-hours.

If you are hoping for more playtime out of your Quest 2, please check out or review of the NIVRANA battery pack – as we have found similar performance with the Quest 2.

One thing we really enjoyed about the original Quest was the out of the box approach the device offered, and this has of course continued with the Quest 2 – in what we like to call the games console approach to VR.

All you will need to do is download the Oculus Application on your phone, to pair the HMD to the application, do any updates required to your headset, and then run through the instructions and tutorial inside the Quest 2, and you are ready to go. This process takes no time at all and your hand is held throughout the full process with instructions, making it so simple.

The team at Facebook Reality Labs have gone for a single fast-switch LCD display panel, which offers 1832×1920 resolution per eye. As with the original Quest they have kept the native refresh rate at 72Hz, however, they have confirmed 90Hz support will come for developers that would like to implement this.

With the new LCD panel having an increased resolution and the new Qualcomm® Snapdragon™ XR2 Platform chip, it means they have managed to make some great improvements in the visuals department.

The biggest change in the device for visuals is the switch to LCD from OLED in the Quest. This change brings the downside of the black levels offered by the OLED not be achievable on the LED panel. However, this trade of does come with massive benefits, in allowing for more sub-pixels being available – which in will help with the sharpness of the image, and also  makes for very clear readable text in games. This also allows a larger fill-factor, this helps reduce elements like screen door effect. So, the trade off in the panels has more positives over negatives. 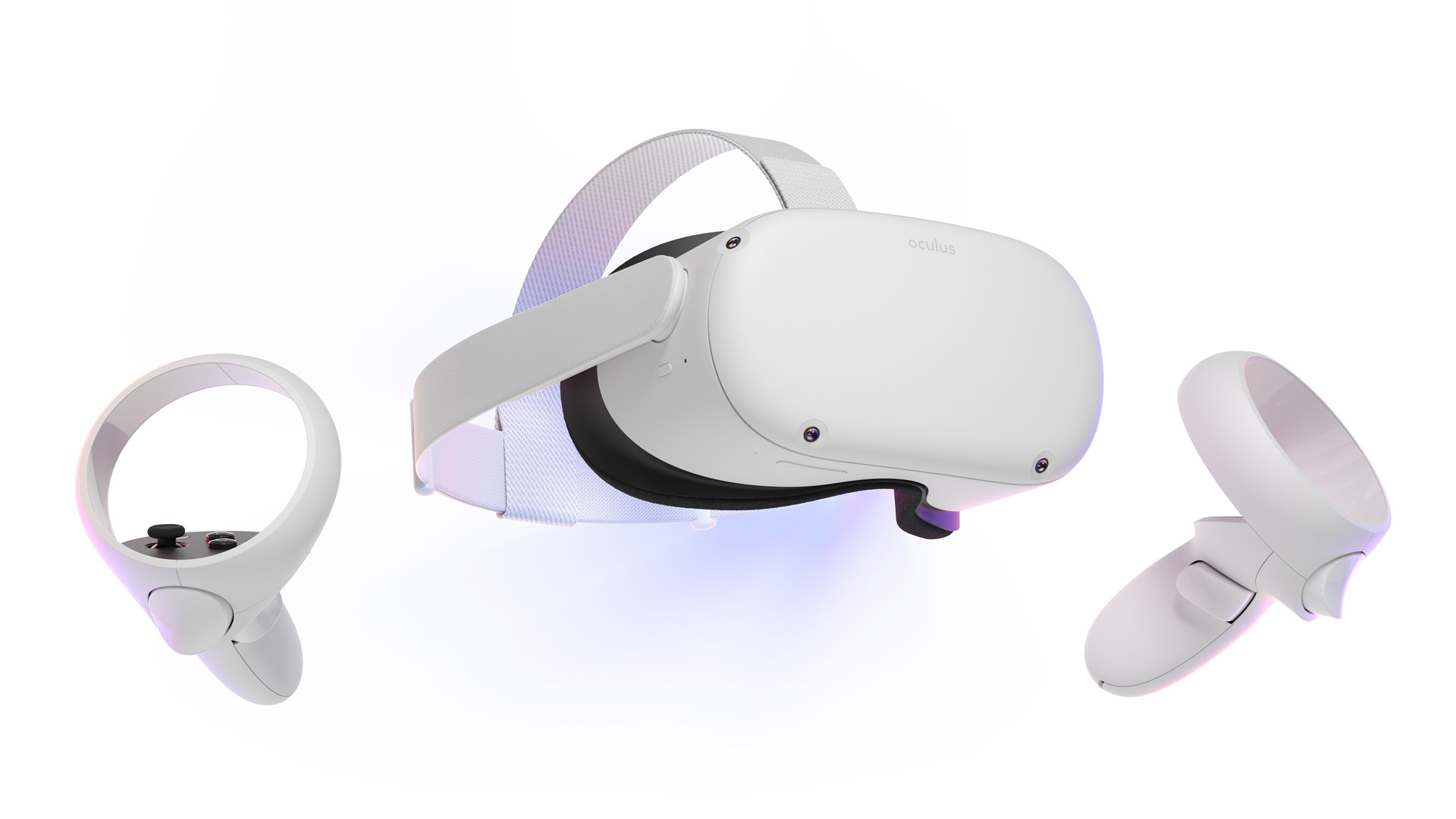 The final element of the visuals is the Field of View (FOV), and the Quest 2 brings an FOV of 92-degrees horizontally, which is slightly smaller than the previous model. However, this will not be noticeable to most users and is still an acceptable FOV for VR.

This is one area we were hoping for an improvement over the Quest and Rift-S, but they have gone for the same audio solution of having it integrated into the head-band of the device. This is an audio solution that works, and the quality of the audio is still clear and also leaves you aware of your surroundings with your eyes being covered – but, this is something we still struggle to get used to as immersive audio solution.

If that is something you struggle with also, the headset still offers a 3.5mm audio jack, meaning you can connect a pair of headphones to the HMD. This is something we found ourselves doing quite often when using the device, although, this is something subjective to each user.

Performance wise, we have been very impressed with the tracking on the new controllers, and found we very rarely lost tracking over testing the product. The quality of the build also seems a lot more sturdy as well, we have hit the controllers together, hit a wall with them a couple of times and as aforementioned hit the HMD with one of them – and despite this we can see no visual marks or breakages on the controller ring.

We are not sure what sort of witchcraft they have done with the battery life for the controller as well. Over all the testing we have done since its release, we have not changed the batteries once in the controllers, which are currently on ten-percent per controller – this is a vast improvement over the Oculus Quest. 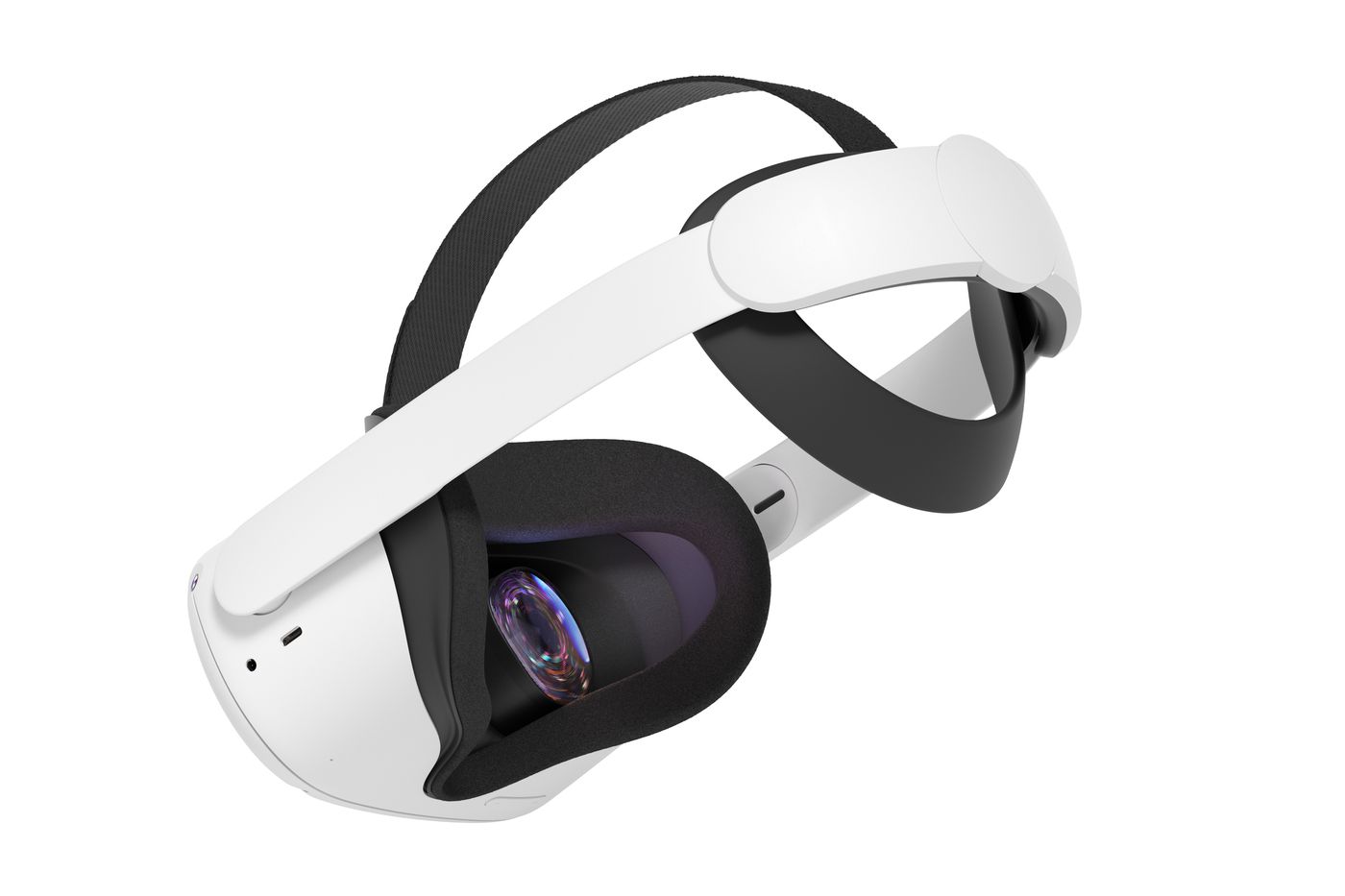 As well as the Quest 2, we ordered the Elite Strap as we were not sure if the original strap would be suitable for long sessions when ordering the device.

The Elite Strap does what you would want it do if offering a solid alternative to the fabric strap with additional support for the back of your head. With this comes the benefit of extra comfort, and it’s something we have enjoyed having in place for the main duration of the testing.

Even with removing the HMD from my head and placing it in the carry-case on nearly a daily basis since the release of the device, we have not faced any issues or deterioration with the head-strap – which is being reported around the internet.

Now, the main question; is the Elite Strap an essential purchase? This is a hard one to say, as again this will be subjective to the user. Where we do prefer the extra comfort of the Elite Strap, we would say with the bit of testing we did with the fabric strap, it is not essential. But, that does not mean that every user will feel the same.

For the purposes of transparency, this review was created using hardware we paid for. The use of purchased hardware does not affect my judgement of the product.

From first opening the box of the Quest 2, to testing out the device over the last month we have been seriously impressed. The improvements they have made over the original have made this standalone device even more stellar. The Qualcomm® Snapdragon™ XR2 Platform and improved memory really makes a huge difference in the load times and offers some great visual improvements when paired with the new resolution and LCD panel. If you are looking to get into VR, this is the headset your should start with. Not only is it at a great entry level price, but if you have a VR capable PC or plan on getting one, you can also use the Oculus Link option to make it a PC VR headset. I think the fitting way to conclude this review is with the question; Is the upgrade worth it? Again this is a resounding yes from us.
By the Oculus Quest 2
Paul Manton November 11, 2020 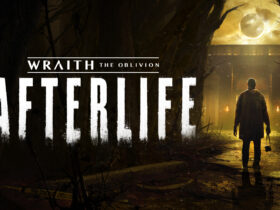