Pixel Ripped 1989 really left a positive impression on us when we played it back July 2018, now nearly two years later its time to visit 1995 in the sequel to the game. Why the jump to 1995? The team at ARVORE ended 1989 with a favourite year selection, and 1995 was selected the most – meaning the players selected the year. So, did we enjoy this trip into 1995 as we did 1989?

Following defeating Cyblin Lord in the original game, he has returned and once again has managed to take a Pixel Stone from a different generation. So it’s time to travel the more colourful and detailed setting of 1995, to try to take down the Cyblin Lord and retrieve the Pixel Stone or the Poly Stone that it becomes as the graphics in that year progress. As with the original game this is going to be down to Dot, and this time a kid called David – who is the best gamer in 1995. The question is can you make a team and retrieve the Stone and save your village again?

In Pixel Ripped 1995, the team have brought back the three dimensions that were popular from the first title – but have refined these elements. The main element of the gameplay will have you playing levels in the 16-bit era of gaming from consoles, arcades and with the 3D expansion for the console, but as the 32-bit era comes in you will jump this for the final parts of the game. This will have you playing takes on classics titles like Castlevania, Streets of Rage to Crash Bandicoot. Which as with the first shows some of the games that Ana Ribeiro loved as she was growing up as a gamer.

The second element is where the refinement have been shown, as this is the element of David’s world and his Mum who is worried about the effects of gaming, his Dad that just wants her to let him do what he wants, and the annoying Kid from next door. This can see you distracting your mum so you can game longer, turning your TV off if she wakes up as you late night game and dealing with the annoying kid. Again these elements are a welcomed addition as it makes use of the VR placing you in the world of David and keeps that immersion… plus these are all things I’m sure every gamer has had to do when they were younger. 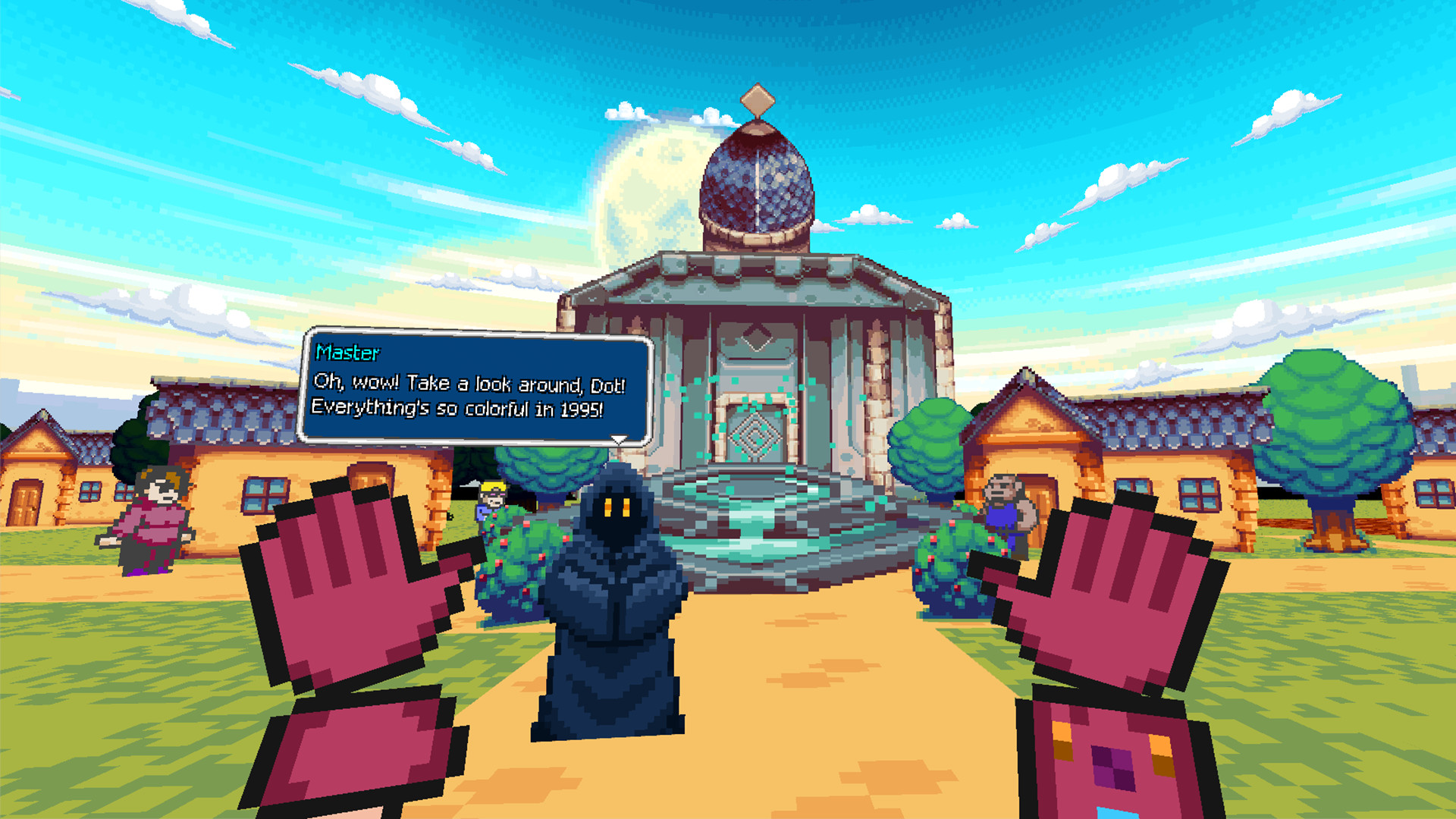 The final element is when Cyblin Lord invades your reality, however with the gaming generations changing this has allowed the team to play with how these work a lot more in 1995. This will see you taking on levels built into the world but with the 1995 generation in mind, and take on bosses he has spawned into your world. In these elements you will see homage to games like Road Rash and Star Fox to name a few.

The mix of these elements really keep you entertained from start to finish in Pixel Ripped 1995, and keep the game feeling really fresh. If you were a gamer in that era, all these gameplay elements and the games it pay homage to are going to give you a great nostalgia trip.

In the game you start in Dot’s world and the classic green and black colour scheme from the previous title, but you are soon taken through a portal to 1995, suddenly you are in a more detailed and colourful setting, more in the ilk of classic RPG’s in the 16-bit generation like Chroro Trigger. Then throughout the game you are going between Dot’s world and David’s world. With David’s world also showing some improvement over Nicola’s world from the 1989.

Also, in 1995 you jump locations in David’s world, from being in his living room and bedroom to a Rental Store and an Arcade. With all the areas being decorated and designed like you can remember from 1995 – which keeps that nostalgia built-in the gameplay. We also get an improvement in the character models detail and animation, with the game keeping the cartoon feel from the of the first instalment.

The final little touches of the visuals are when Cyblin Lord invades your world and these levels and boss fights are all well designed to make use of the real world and still look great. There is also some nice touches that bring this change of dimension to life – for example; when in an underwater part and Dot needs air, the room you’re in will start to fill with pixelated water. 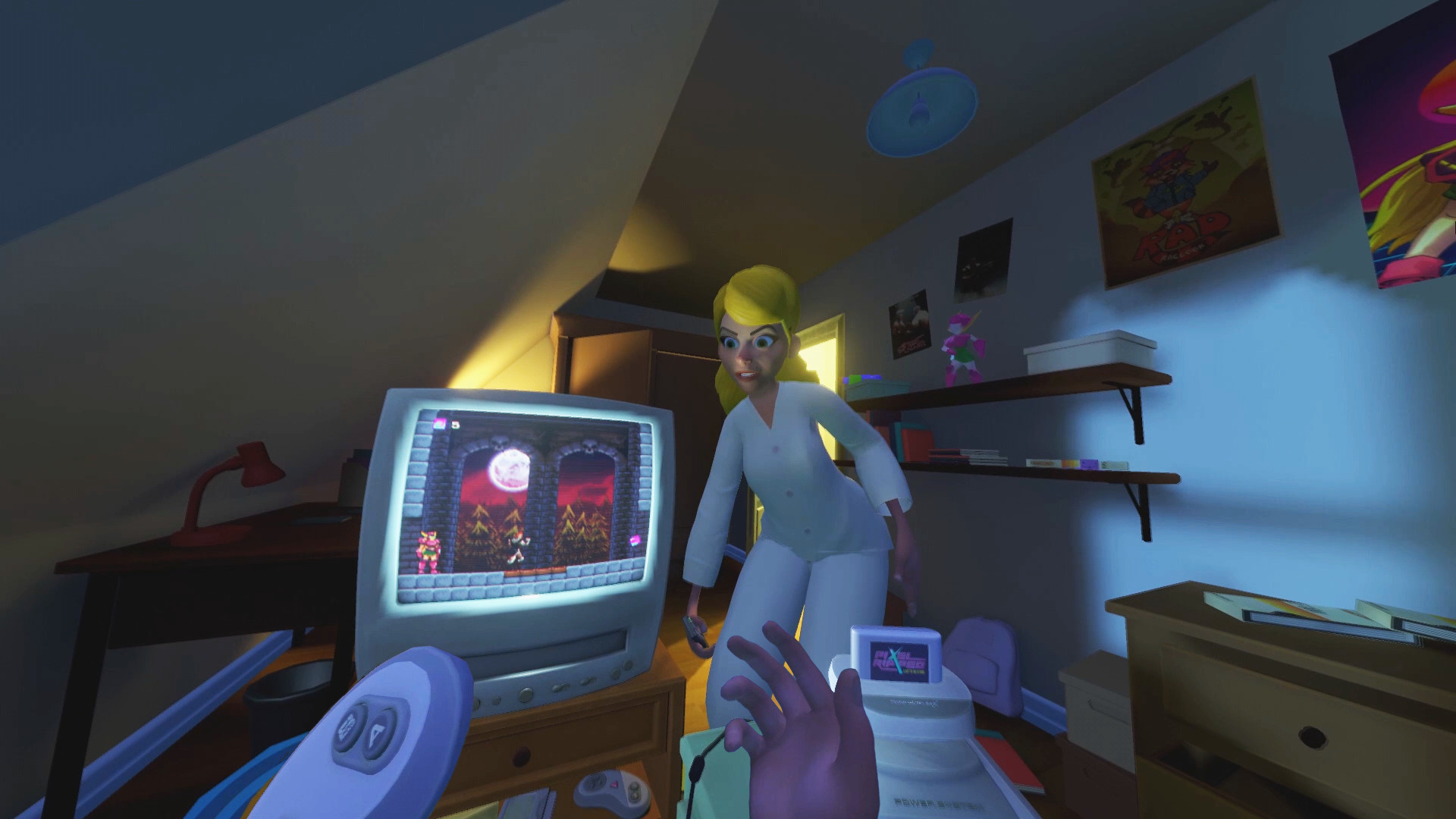 For the audio expect chip-tune to be ever-present in the game, with the generic jumping and shooting sounds of the generation and you will know what you are in for regards to the audio. Then add to this all the areas you visit in David’s world sounding like they would in real life. From general background noise of you parents speaking, the annoying Kid distracting you and of course the hustle and bustle of the rental store and arcade and you are taken into world that ARVORE have created for 1995.

When it comes to the controls, David is going to be using the classic two button gamepad throughout the game and the two button joystick in the arcade. For this reason the only buttons that are used on the Touch controllers are the A and B on the right to carry out the actions and the left-analogue to move – keeping it inline to the controllers David will be using, offering that extra immersion.

The game can be played either seated on standing, it is all down the player preference, as unlike the seated design of 1989, there are some parts where David is seated and some where he is standing, so if you wanted the full immersion you could match this and reset the view by pressing in the analogues. However, the immersion is the only benefit from doing this, and I found I just played the majority of it from the comfort of my office chair.

We managed to get through the game in two and half hours, with very little deaths, so we would say expect around this amount of gameplay time, which left us with the feeling of wanting a bit more due the nostalgia and fun we were having with the game. However, with that feeling of nostalgia and liking every game that Pixel Ripped 1995 paid homage too, we could certainly playthrough it again and revisit our favourite levels – I am sure others will be left with this feeling too.

Pixel Ripped 1995 has once again took me back to my childhood and again I loved it, with the game paying homage to some of favourite titles in the generation. Jumping between the different dimension and gameplay elements keep the game fresh, and these have been refined from 1989. Making the 1995 experience feel new; just like getting that new console. Once again Ana Ribeiro has brought her love of gaming as she has growing up and blended it perfectly with VR in away no other game does. If you played Pixel Ripped 1989 or not, the team at ARVORE have brought another nostalgia trip to VR that no one should miss out on.
Buy Pixel Ripped 1995 (Cross-buy on Oculus)
Shares
Share on Facebook Share on Twitter
Paul Manton April 22, 2020