The Sharknado movies have really built a franchise around the whole so bad it’s good mentality. Well it’s time for the franchise to move into the video game world, and more importantly in virtual reality. Does the game tie in manage to pull off being decent or even the same mentality gained by the movies?

The game gives you a tiny little bit a the story. You start in a bar with the news reporting on the sharks on the area, and it quickly brings in the line of ‘they ain’t turkeys, these are people’ when talking about the poor people they are eating. Soon the storm starts and sharks begin to fly into the bar and eating the patrons, and soon your are in the eye of the tornado and taking on these sharks.

This is where the gameplay comes in, as you take on waves of these sharks, in what is essentially a wave based shooter. It will tell you how many you have to kill to move one to the next wave. Basically it is just mindless shooting at these sharks flying at you in the storm.

Each level in the game will grant you a new gun or weapon for taking out these waves, and in most cases they are better than the last gun provided. However, I found I didn’t use the rocket launcher much apart from the final large boss fight, mainly I just kept to using the automatic rifle. As well as these new weapons you might unlock some new ammo types depending on your performance from what I could tell while playing it, but these might just automatically become available.

The levels also throw in the little extras of needing to dodge objects that are flying about in the storms like surf boards for an example, and also protecting civilians that for some reason decided to go out in this storm. This is where the whole ridiculousness from the movies come into play, as you have to protect a woman with a baby stroller to the President in these scenarios.

This makes up all the elements of the gameplay, outside of the ability to fail by running out of lives – although the game does provide a steady flow of these throughout the waves, the same for health. Really bringing the idea and feeling of this mindless shooter. 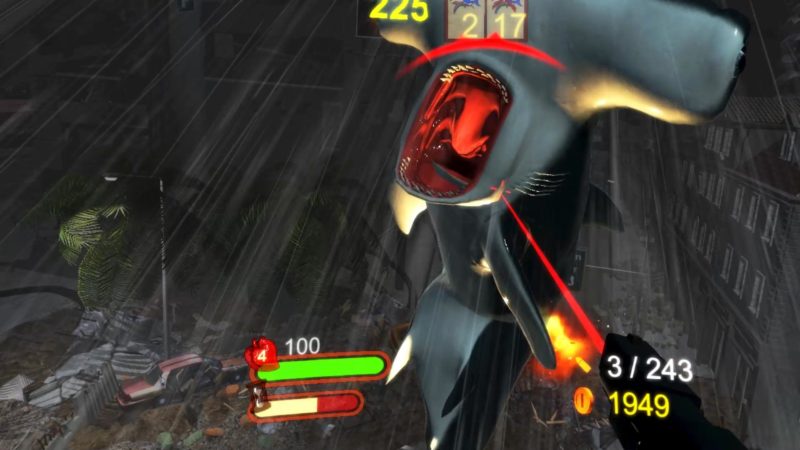 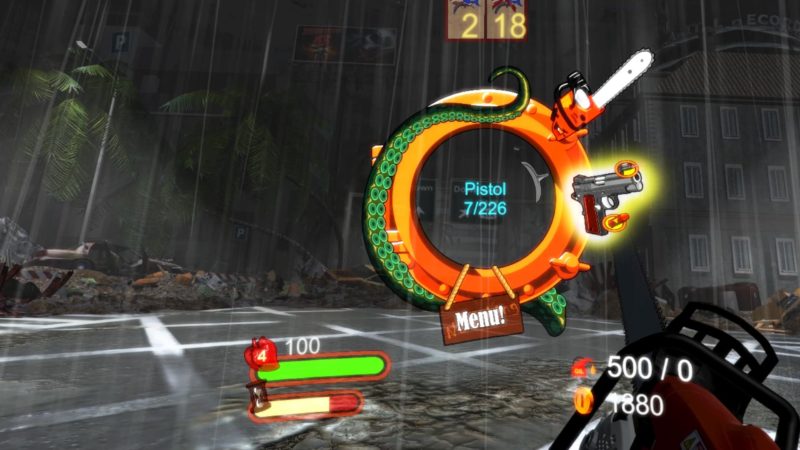 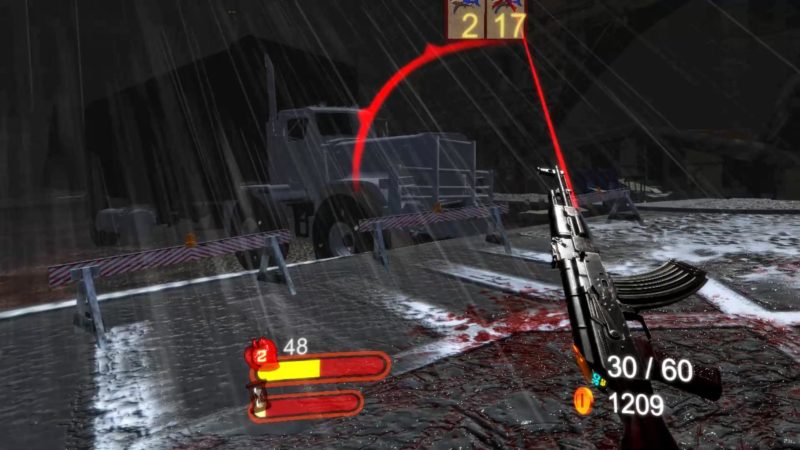 To say that Sharknado VR looked good visually would be an overstatement. With it offering the sort of visuals you came to expect close to the launch of the PS3 generation of consoles. The levels will trap you in the area using some debris, with the environments not looking overly entertaining. The only part of the visuals I thought had some clarity were the sharks. But, given the games base material and what they were working with, you wouldn’t come to expect anything fantastic in the presentation department.

When it comes to audio this does what it can with the idea of the franchise, you will mostly be hearing the sound effects from the storm, the thuds as the sharks hit you or the environments and the noise of your weapons firing. Other than these sounds, you are treated to some music, voiced lines from protesters, noises from the civilians you are protecting if they are hit and by animals or people trapped in the storm flying about. Again meaning the game does as little in the audio department as it does the visuals – but at least in this part it does what you would expect.

The game can be played standing, using room-scale or seated. I found no benefit from standing while playing the game, just played it seated most of the time. When it comes to the controls you use the tracked motion controllers, with the gun and turning being assigned to one hand and the movement and weapon wheel being assigned to the opposite hand. There is no manual reloading in the game, it’s all just about dodging and shooting.

Each playthrough of the game will take around forty-five minutes to an hour and if you just accept the game is mindless fun you will may be go back to the game again. This will happen when you just want to sit back and not have to think about what you are doing and just take the opportunity to shoot or slice sharks with a chainsaw.

Sharknado VR brings a wave based shooter to VR that is more just about mindless fun, than needing to concentrate and aim for objectives. If you approach the game with the mindset that it stays true to the movie franchise, you might just find it could also fall into the so bad it is good category the movies are tagged with. However, it also comes with some glaring issues. The first being the presentation of the game leaves a lot to be desired, and takes away from the experience. Then the games price point of £13.99 is very steep for what you getting overall, but I would say may be consider it if goes into the Steam sales for less than half of that price.