The game is essentially an endless-runner in VR, which is welcomed as there isn’t many on the PlayStation VR platform, so it’s great to add another one of these to the library of games.

In the game you will be navigating through tunnels at what become breakneck speeds at around level fifteen, and these continuously increase as you complete each level. What makes the challenge in doing this is the varied over-sized objects that will be in and around these tunnels. Each one with it’s own movement path. So, not only do you need to compete with the increased speeds, but you will need to work out the movement paths of each object.

The aim of the game is setting new records in how far you made it without crashing into one of these objects – this is recorded in both distance and score. You are given a check point every three levels, meaning that if you crash later on you are not forced to start back the level one. But say you crashed on level three, you will go back to one. However, if you quit next time you will load in, you will have to start at level one because the game does not include a level selector. But, with this being an endless runner this is ever-present in these sort of games. 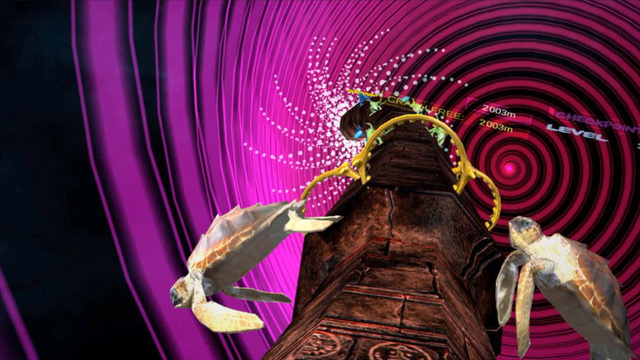 Now you might be thinking this all sounds a bit simple, well the presentation makes this a lot harder. The game visuals is like a bad acid trip. Mixing crazy settings and visualizations with the aforementioned over-sized objects. The objects range from turtles, sugar skulls to garbage bins. Adding these together and you will be getting a visual assault on your eyes that’s not been since Polybius was released.

Put these crazy visuals with an old-school techno and dance soundtrack and this is made even harder due to the control method. So not only are you getting a visual assault, you are getting the soundtrack to go with what you are seeing in the headset.

I’m sure you thinking… why does this not help with the control method? With this being a mobile VR game originally the game is controlled totally by your head movement. You will be leaning side-to-side with your head to rotate around these level. This is where that catchy music becomes and issue… it’s hard to keep your head still while playing. With this being the only movement system in the game and no options of using controllers, the game is to be played sat down. Where you might think the crazy speeds in VR are surely going to cause discomfort and/or motion sickness, this really doesn’t. What the team have done well is keep the stages narrow, so you always have that focal point to reduce this.

Verti-Go Home brings a visual and audio assault you could liken to an acid trip, and doing this in VR makes it so much more enjoyable. Bringing a new endless runner to the PlayStation VR, something there is a serious lack of is a huge plus. However, the lack of level selector might put some people off, as the game really excels as you hit level fifteen plus. So after experiencing this having to start at level one on your next boot up, can make it feel a little drab. But, if you were a fan of Polybius or even want a decent VR endless runner, you should look no further than Verti-Go Home.