All the way back in December 2017, we had a lot of fun playing Shooty Fruity on the HTC Vive. Now nDreams mix of being a supermarket employee and shooting mayhem has made it’s way to the Oculus Quest. We have now spent some time scanning items, stacking trays and taking out invading fruit on the stand-alone device, does it still hold up?

One thing we really enjoyed about Shooty Fruity all those years back, was the team had brought something new to the wave-based shooter genre in VR – and it still stands out as different to this day. On one hand you have to carry out your jobs in the supermarket, be it working on the check-out scanning shopping items, packing items or preparing food for the food court – all while needing to shoot the invading fruit throughout the level.

You might be thinking, can I not just ignore the jobs and focus on the shooting? The simple answer is no. The reasons for this are; they are sometimes within your level goals towards your star rating, they will unlock your better weapons on that stage and also give you power-ups – which can become essential to you surviving later levels.

Now to the weapons within the game. You will start with a standard pistol and shotgun, however, you do have a vending machine in the lobby that you can purchase weapons from. You are going to be purchasing these using Juice – which is rewarded throughout the levels for shooting the fruit. Once you have purchased new weapons, after selecting your job from the job board, you then get to choose your arsenal for that level.

As previously mentioned the game also comes with a star rating for each level. You can achieve three starts per level for completing your tasks as an employee and for set goals in your shooting. These stars are important because not only do they unlock the next jobs, but they also unlock the guns for you to purchase. Meaning you really need to check your star goals carefully, as those guns can become very important as the game moves on and you get more and more types of fruit invading the supermarket.

Given the cartoon Job Simulator-esc graphics used in Shooty Fruity it has ported well over the Quest visually. Of course if you played the PCVR version, you will notice some visual downgrades, but the game still looks sharp and clear visually on the stand-alone device. However, the best part of the visual design is the fun but sinister look to the fruit and the way they explode on death. On the explosive deaths, one thing we did not expect to see on the Quest port was the fruits explosions leaving their juice all over you, your guns and your workstation – and the team have done a great job at keeping these in the game.

Add to these visuals the sounds of the game and it really feels like your a worker in the supermarket. From the general noises from the beeping of the check-out to the announcements over the shop tannoy. Ok, these announcements over the tannoy is what we assume is your boss berating you about the job you are doing – letting you know you should not be shooting the displays and so on. Finally to go with the fruits fun cartoon design, you have their grunts and noises to make them that more enjoyable to kill. 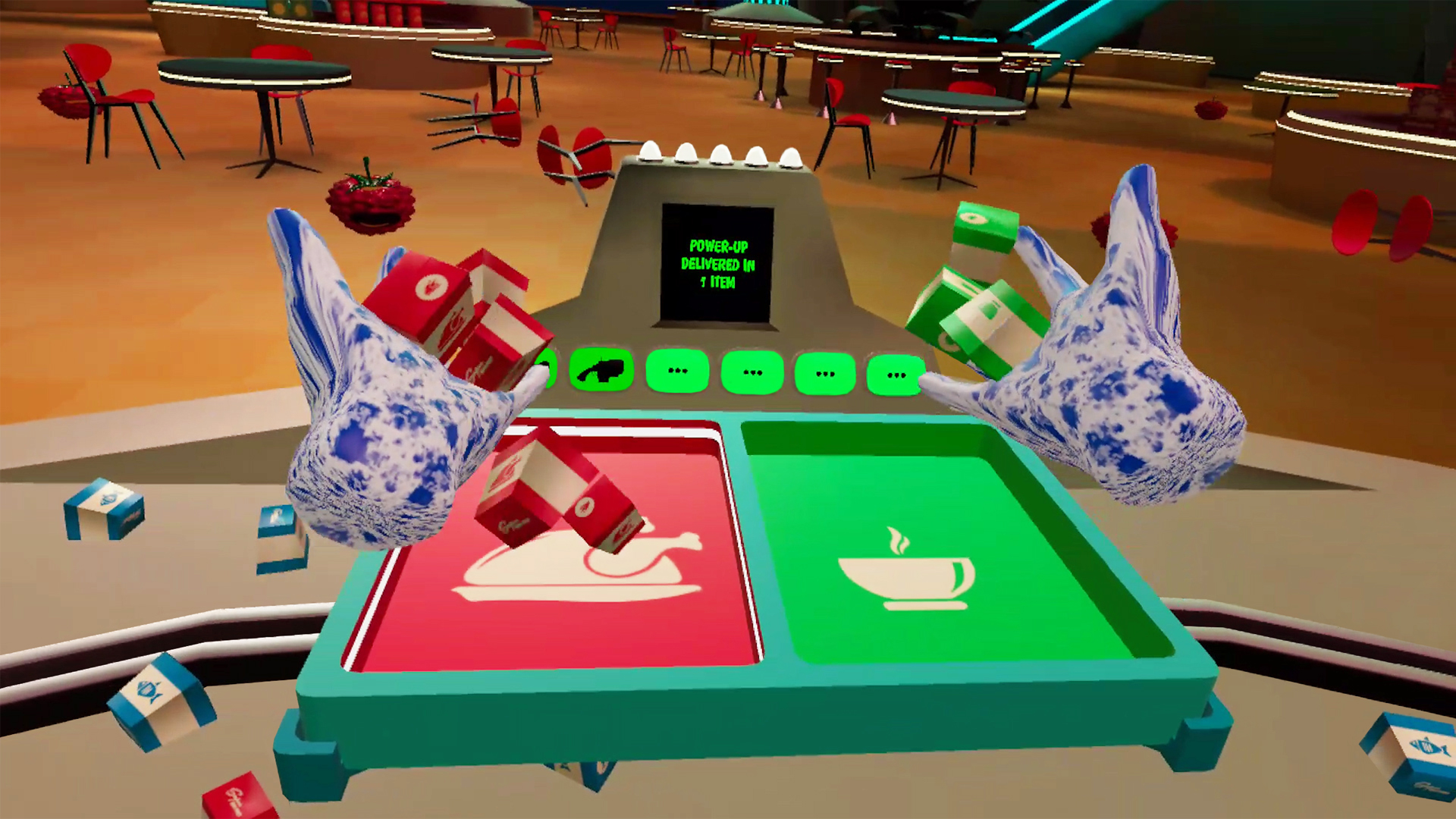 The game can be played standing or seated, and give the static nature of being behind your workstation on the check-out or in the food hall, the game will be comfortable for anyone. When it comes to the controls, the only buttons you are using are the grips to pick-up the items and the guns, with the triggers shooting the weapons – simple but all the game needs.

Shooty Fruity has twenty-four levels, which are all locked behind the aforementioned star based unlock system. Unlocking all the levels and the all the weapons will take you around three to four hours, all depending on your skills at the tasks at hand. However, given the wide range of weapons, you can go back to the levels with a new load-out, which will make you face new challenges and make them feel unique again – while also trying to beat your best scores on that level.

We really enjoyed Shooty Fruity when we played it back in 2017, and we have enjoyed our time working and shooting our way through the Quest version. The game still looks nice on the stand-alone device and the team have done a great job on the port. Given the comfort and ease of the controls this is a great game to put those new to VR into, however, the game feels it’s missing something and that something is boss fights – we just feel these would be a great addition. But, one massive selling point of this game is that it still feels unique in the wave-based shooter genre, given you have to complete your job while taking out these fun, but sinister fruits.
Buy Shooty Fruity
Shares
Share on Facebook Share on Twitter
Paul Manton September 10, 2020