One game that had us excited from the announcement of the Oculus Quest back at Oculus Connect 5, was the fact The Climb was coming to the stand-alone VR device. This was one game that had me jealous of not being able to play, until we got our first Oculus HMD. We have now taken to the mountains in the Quest version of the game – so how did it hold up?

As you would expect from the title and aim of the game, the gameplay is all going to be about you climbing – well in this case free climbing. With this being the games main focus, it was going to be essential that this mechanic was very polished. We are glad to say this works fantastically, and the game is certainly allowed to excel because of this.

You will be greeted at the start of the game by a well-paced and detailed tutorial, that will teach you all the basics of climbing, and more tutorials being introduced as you move to harder climbs with new obstacles and mechanics in place. But, what these tutorials do is make sure you are ready for The Climb.

When climbing the ledges you can grab hold of are highlighted with a white chalked edge, this will indicate in what directions you can go, be it side-ways, upwards or sometimes dropping to another ledge. It all depends on which way you want to challenge the mountain in front of you and what is in your reach. Outside of your standard reach, you will also have the option to either jump upwards and sideways to reach ledges or make it over gaps in your routes. The jumping is handled it two ways, you can go for the more realistic pulling to use your momentum or simply by pressing the A button facing the direction you want to jump.

As previously mentioned, as you progress through the stages some more mechanics can come into play, to try to offer more of a challenge in your climbs. These come in the form ledges you need to dust off, crumbling ledges and also ledges with poisonous plant-life on them. In some cases you could miss these with a jump, but not in all cases.

The final element and the most important for your survival on your climb is your stamina – and there is a number of things that will affect this one the way. Your stamina is shown by some meters around your wrists once this depletes you will fall and you will also start to breathe heavily. The way this will deplete is by holding onto ledges with one hand, jumping, touching those poisonous plants on some of the ledges and of course climbing for too long without taking a quick breather.

There is two ways to manage your stamina, as mentioned you can take a break by holding onto ledges with both hands to recover and chalking your hands – which will make your stamina deplete slower, given your extra grip. What we found was we were just chalking our hands quite often.

However, we have got a few issues when it comes to the gameplay – you seem to have been given an obscene reach and strength when climbing. Some reaches that should be impossible are easily made without having the need to jump and when It comes to the strength you hold onto tiny ledges with just a couple of fingers for a prolonged time before you stamina depletes.

The Climb looked absolutely fantastic and beautiful in the Rift version of the game, and we were worried this is was where the game would falter in this stand-alone device. But the Quest version managed to still look great, despite the visual downgrades it had to make, and where previously it seemed those hyper-realistic looks are hard to pass on the Quest, The Climb manages to do this well. But, the team at Crytek deserve a massive pat on the back for keeping the game looking great within the restraints of the Quest hardware.

When it comes the audio the team took the correct approach too, especially when it came to the background music – this is more quiet and calming, which will allow you it to feel more casual and not frantic when climbing. 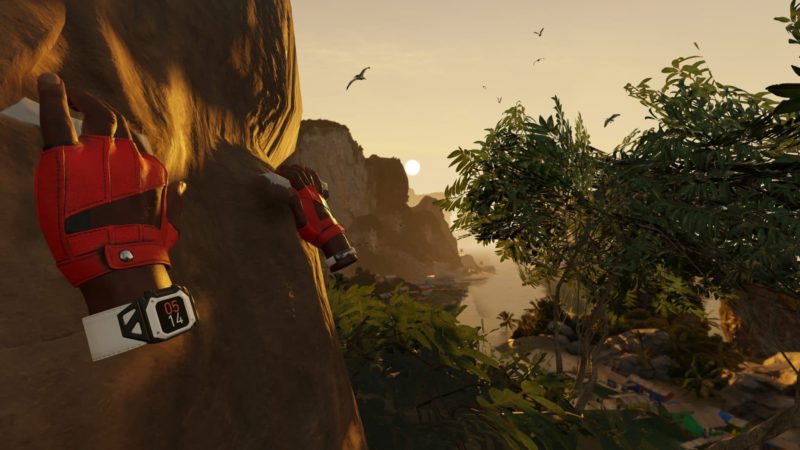 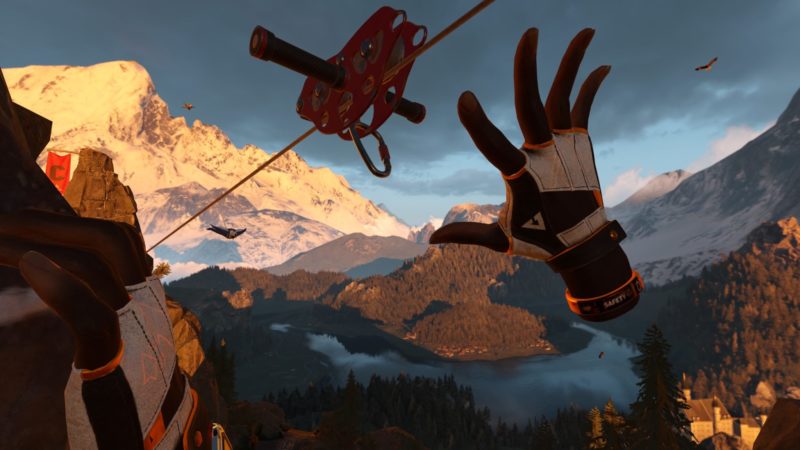 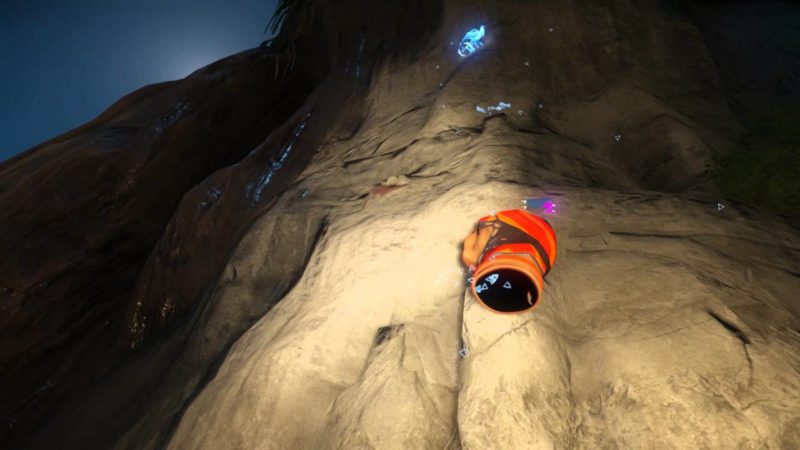 But, as with the climbing mechanic a big part of the game and its immersion was going to building the atmosphere and environments with the use of the sounds. Again this has been done to high-level with the sound of the wind moving around you as you scale higher and higher, and your characters breathing indicating your stamina being all that they needed and these are spot on. Add to this the great use of the spacial audio making moments like when a helicopter flies-by take you in, as you turn and see it in the position the sound has indicated.

Again though with the Quest restrictions you will find some parts where the audio faces some issues. With the main one we noticed being the sound of running rapids below you, yet when you looked down there was no animation to the water. However as mentioned this is more down to the restrictions of running it from a mobile processor, so it was really taken out of the hands of the team at Crytek.

For the immersion you really need to play the game standing, and we would recommend this is the only way you should play it. When it comes to the comfort of moving, as you are not walking it will be comfortable for most users. However, at first those falls when running out of stamina could make you feel off-balance and uneasy on your feet. Even as someone who has stopped suffering from these, for some reason The Climb managed to make me feel it.

When it comes to the controllers it’s kept simple. With each of your hands being represented by your corresponding hand. With the only buttons being used are the trigger to grab the ledges, holding grip and shaking your hand will chalk your hand, and as aforementioned the A button to jump if you chose to handle jumping that way.

When it comes to longevity, to get through the three stages on each of the three difficulties will take about an hour and half. Although this might seem short the game brings many reasons to return – outside of just wanting to revisit a climb.

Firstly each stage does have multiple way to conquer the mountain, meaning you can revisit them and have a complete different experience just finding and taking another path. Also as you complete climbs you will be rewarded with points that will level you in-game – which will unlock new gloves, wristbands and watches to customize your hands look. This will also unlock two boulder levels in each location, which acts like a challenge mode. Where these climbs are shorter, you can not chalk meaning your stamina will deplete a lot quicker.

Then outside of these single player reasons to return, you can also challenge friends and other players on the leader-boards by setting fastest times for each climb. So, if this is your thing you will have a great reason to keep returning to the game.

The Climb is another title on the Quest, that pushes the boundaries of the hardware while showing exactly what it is capable of achieving. The Quest version of the game brings with it all the solid and fluid mechanics from the Rift version of the game, and still looks and sounds great despite the downgrades they needed to make. With many reasons for you return to the game after completing all the climbs, giving it plenty of replay value. With the experience of the game only being let down by a few decisions breaking the immersion in some cases.