I was worried for Little Cities, when Cities: VR was announced shortly after this indie title, made by two people. With two City Simulation games coming out in such a short release window, it seems like a good time to be into these sort of games. I have now taken on the creating my own Little Cities, the main question is…. Were my original worries the game worth it?

When it comes to the gameplay, Little Cities offers a much more laid back approach to city building simulation by not over complicating things and making the management of the your city much more simple – and it is something I came to discover really works in the titles favour. However, with this in mind if you are wanting a fully fledged simulator this title will not be for you.

You start the island with just a port and the start of your road, you will then expand from here and set up your first area of the island, as you start to grow the population of your city. As you expect with an ever growing population, you are going to need commercial zones for shopping and job opportunities for the residents and industrial zones to create ever more jobs, to keep your island moving forward.

As the population grows you will then start to unlock extras for your city, emergency services, hospitals, schools, recreational areas and even airports to allow holidays and visitors to your island. All of which is going to be important for improving the happiness of the residents of the island.

Of course as you add more and more to the island utilities become important, to make sure your city has full water and power supplied, as well as a mobile network to connect to. This is where the more simple approach on Little Cities comes to the forefront, as you will get a power and water meter, if these deplete you know you have to add more, when having them equipped to place, you see the roads light up showing the coverage and that everything has a connection. Which is a simpler approach than needing to place the water pipes and power lines yourself.

When it comes the islands they will vary in size, and making most of the grid system is going to be important to get the maximum out of your islands, but you also need to remember to plan for the all the services, as some take up a larger amount of space. But, what the game does well is while playing the first island, it gives you plenty of tip as you try to reach level ten. This then opens up the larger islands, which require a higher level to complete. These levels are also used to unlock all of the extras on offer, meaning as your population grows, you will get the emergency services, schools, medical care and things like theme parks and airports as you city level gets higher – giving you something to aim for.

As mentioned, you will get three sorts of zoning types; residential, commercial and industrial. You do need to balance these correctly to allow for an island that functions correctly. This is monitored by a graph on your hand, that shows the demand for each zoning. If the graph is higher you need to create more of that zoning on your island. Also you will get hints on the menu on your hand, that might tell you to create more of a set zone, if the power or water supply is getting low and if something is missing coverage from the emergency, school or medical services.

Now, where even more of the laid back approach is shown, is that it’s not often you find yourself running out of funds, with this only being an issue until you get that first cash injection for levelling your city. But, with that in mind, when you do need to generate that extra cash or waiting for the building to be completed, you do feel like the game would have benefited from an option to speed-up time.

One of the big charms of Little Cities is the simplified visuals the team at Purple Yonder have gone with, making it feel perfectly crafted for the standalone device. Meaning the performance is kept and it has no loading and pop-in issues. With this allowing for them to not only bring the city, but the whole island to life, from seagulls flying about, the planes flying over from the airport, hot-air balloons floating about and natural disasters like volcanos and sand storms effecting the cities. Even the simplified graphic style keeps its charm when zooming into the island and taking in the population going about their city life.

Adding to this some great relaxing music, suiting the games more laid back approach, and the general noises of the population living their life, sirens from the emergency services and the aeroplanes flying by really bringing the islands to life with audio as well. 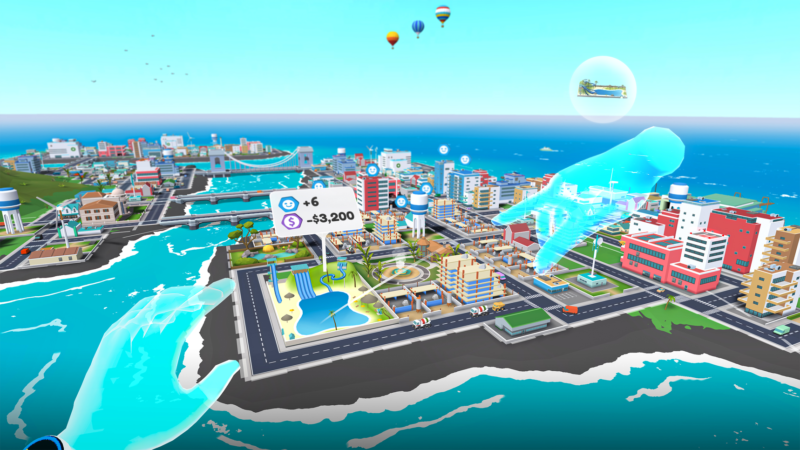 Little Cities can be played seated or using room scale, with the team not opting to include smooth locomotion into the game. Instead you can grab the island with your pointer and pull yourself around the map. To go with these options they do allow you to activate a comfort cage and also use snap or smooth turning.

The team have done wonders with the controls, with the way you access and navigate the building system being perfect for VR. For this you click on a hammer on your hand, this gives you your building menu, you then going into sections like zoning, utilities and services, select what you want to build and place it with the trigger. When you no longer want to build what you have selected, you can look at your dominant hand and press the bubble on that had to deselect it. This control scheme works wonders and is so easy and simple to get used to.

As part of the post release roadmap that has been confirmed already by Purple Yonder, the controls will also be offering hand-tracking as an option, planned for release in June.

The game comes with six islands, with most of islands taking one to two hours to get to the max level on each, meaning you are getting around ten-hours of playtime with the game. However, I have went back into the first island and started again, trying to make more organised zoning, that I have improved over playing the other islands – and others could be tempted to do this also. With the aforementioned roadmap also including new buildings and cosmetic items – meaning you will be able revisit and try and improve them with the post launch content.

Purple Yonder describe Little Cities as a cozy VR city creation game, and I can not think of a better way to explain it – this description hits it on the head perfectly. From the game being perfectly designed to run on a standalone device, the more laid back approach and build menu being ideal for VR. However, with this mind it means it might not appeal to those hardcore city builder fans out there. But, if you love the core of the city builders and want many hours of city designing on six different islands, while dealing with natural disasters and keeping your population happy, as your cities come to life in front of you, purchasing Little Cities is a no-brainer.
Buy Little Cities
Paul Manton May 11, 2022